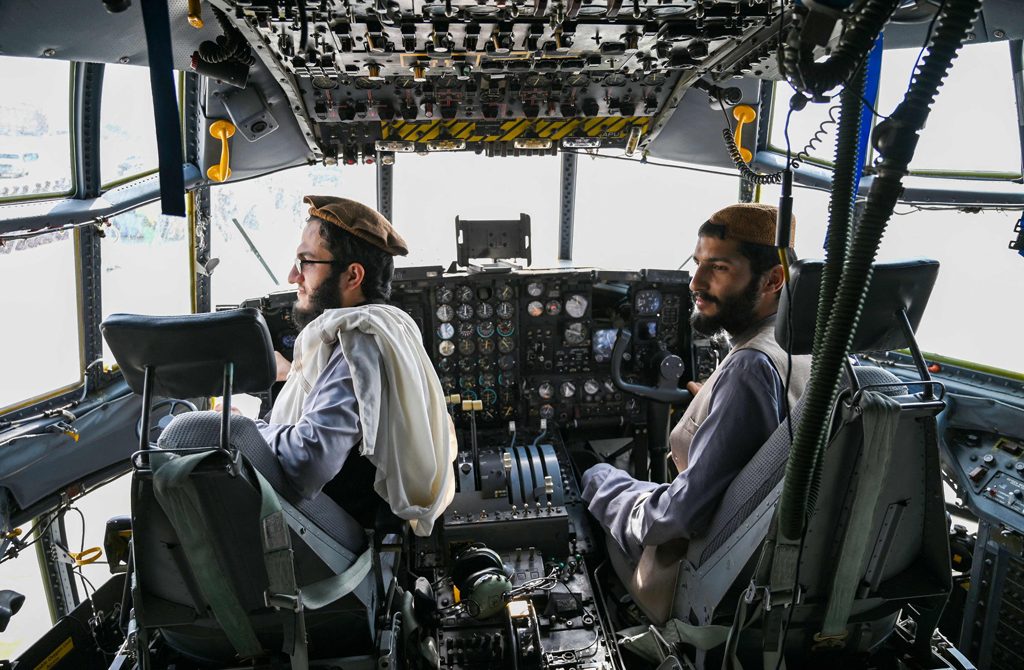 Taliban fighters sit in the cockpit of an Afghan Air Force aircraft at the airport in Kabul, Afghanistan, Aug. 31, 2021. (AFP Photo)

What did America get after 20 years in Afghanistan?

The U.S. invaded Afghanistan to overthrow the Taliban regime, but left the country to a much stronger Taliban. After 20 years of occupation, this withdrawal has brought about many regional consequences for the U.S.

The United States declared that it had withdrawn its last troops on Aug. 31 and thus brought an end to its 20-year invasion. As shared by most observers, the invasion of Afghanistan is one of the most dramatic failures and utter fiascos of U.S foreign policy.

Different perspectives were not a big problem when the U.S. was able to control regional and global developments. However, the more the U.S. faces problems in controlling the global developments and regional crises, the more problematic these different perspectives will be. In other words, when the U.S. loses its effectiveness in international politics, the role of some American institutions will be questioned more.

In the Afghanistan case, the American public hold the White House, the intelligence community and the military responsible for the failed withdrawal and the losses of American lives. For instance, 90 retired generals and admirals have signed a letter calling for the resignation of the Secretary of Defense and the Chairman of the Joint Chiefs of Staff for their roles in the disastrous withdrawal from Afghanistan. A growing number of retired generals and veterans have called for other top military resignations as well.

Second, American allies have increased their criticism of American unilateralism. The European countries have learned that the U.S. consults with its allies only when it comes to a deadlock. Therefore, they have begun to improve intra-European cooperation against real or potential threats. European countries, which differ from the U.S. in developing new relationships with both China and Russia, have been trying to look out for themselves in Afghanistan.

Third, the U.S. started its invasion of Afghanistan in 2001 with the use of drones and ended its invasion with the use of drones. The U.S. invaded Afghanistan to overthrow the Taliban regime, but two decades later it has left the country to a much stronger Taliban. In other words, the U.S. paid a very heavy price for nothing. It has neither demolished the Taliban, nor has it established a new regime. Furthermore, the U.S. left $85 billion worth of weapons and munitions to the Taliban, which makes the organization much stronger.

Fourth, the U.S. has been losing ground in significant regional crises in favor of other global powers, i.e., Russia and China. The U.S. has lost ground previously in favor of Russia in Georgia, Ukraine and Libya. Russia has a much stronger position in the Syrian crisis. Now in Afghanistan, the U.S. is losing ground to China and Russia. These two global powers, together with Pakistan and Iran, have been trying to recognize the Taliban regime and normalize their relations with the new regime. If these states succeed in bringing stability to Afghanistan, this will be a great blow in the heartland of world geopolitics for the U.S.

Fifth, the international coalition has failed in the construction of state institutions and in the consolidation of the nation-building process. Afghanistan remains more divided and vulnerable than ever along ethnic, tribal, social, political, regional and sectarian lines. It is still very difficult to achieve a comprehensive reconciliation between different Afghan political actors. It will take a long time to establish functioning state institutions and to provide basic services to the public. All of this means that the Afghan people will continue to suffer from insecurity and from poverty.

Sixth, Afghanistan remained dependent on external actors for both political stability and economic wellbeing. If the external powers, at least regional countries such as Pakistan and Iran, remain indifferent to Afghanistan, it will be very difficult to recover from political chaos and economic deprivation. The Taliban regime is aware of this stalemate. Therefore, they are calling on Turkey, among others, to take responsibility for running Kabul Hamid Karzai International Airport, since the Taliban know that they do not have the capacity to run similar institutions.

Lastly, Afghanistan remains a safe haven for different foreign terrorist networks and violent non-state actors. Since the invasion of the Soviet Union in the 1980s, for many reasons, thousands of foreign fighters went to Afghanistan. While they have helped the Afghan groups in their resistance against the invasions, they have trained their militants and protected themselves from potential attacks. The presence of these violent groups remains a problematic issue not only for regional and global powers but also for the Taliban regime. These groups will continue to pose a threat to both the Afghan people and the regional countries. In addition, these groups will be co-opted by some global powers in the future to intervene in the domestic affairs of Afghanistan.