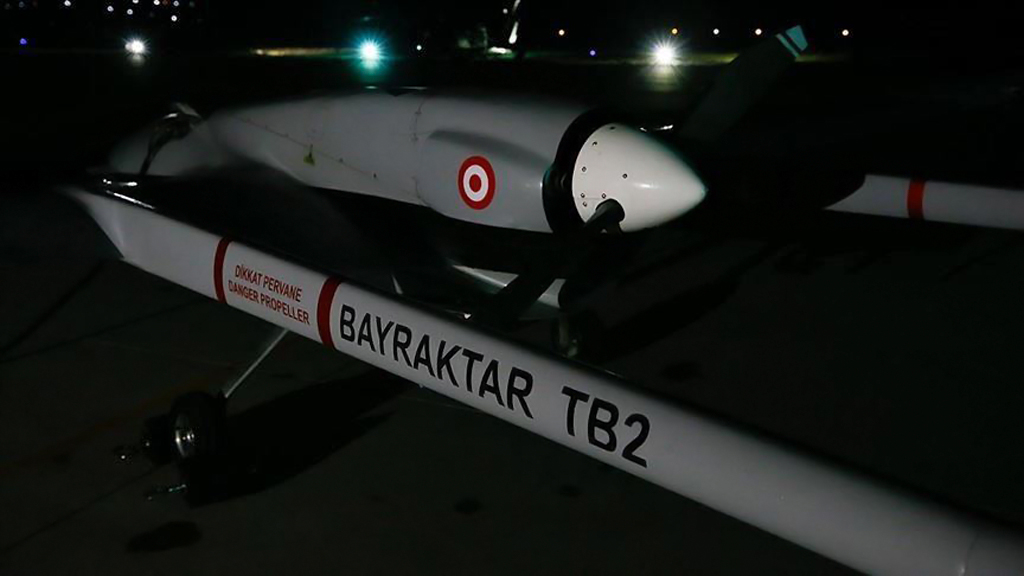 Turkey 'has pushed back' any challenge in region to itself or Northern Cyprus through Libya deal, says analyst

As the first Turkish military drone landed Monday at an airport in Northern Cyprus, experts called the move a necessity to protect the rights of Turkey and the Turkish Cypriots.

Turkey’s move had both political and technical dimensions, Murat Aslan, a researcher on security issues for the Foundation for Political, Economic and Social Research (SETA), a Turkish think tank, told Anadolu Agency. Aslan, who is also on the faculty of Hasan Kalyoncu University in Gaziantep, southeastern Turkey, said technically it is “necessary” for Turkey to protect its vessels in the region.

Turkey has consistently contested the Greek Cypriot administration’s unilateral drilling in the Eastern Mediterranean. Ankara has sent two drilling vessels to the region, and two seismic vessels have been doing exploration there.

Athens and Greek Cypriots have opposed the move, threatening to arrest the ships’ crews and enlisting European Union leaders to join in their criticism.

Nursin Atesoglu Guney, a member of Turkey’s Presidential Security and Foreign Policy Council, agreed with Aslan, saying Turkey’s move is important for the security of vessels in the waters around Turkish Cyprus.

“Up to now, Turkey was conducting operations such as monitoring or information based out of Dalaman,” Guney said.

She said Turkey’s move will “improve the mobility of these activities and provide security.”

For Aslan, it is a necessity for Turkey to deploy equipment in the middle of the continental shelf of Northern Cyprus, where Turkey can move immediately and simultaneously observe every part of the region.

Reaching the region from airports in Dalaman or Turkey’s southeastern province of Adana would take time and take resources away from the Turkish military’s operational activities, Aslan said.

Guney said this step maintains “safety as well as information gathering and surveillance activities of our navy which is assisting in the drilling activities.”

According to Guney, the Turkish move is also a message to the Southern Cypriot administration.

She warned that the U.S. Senate might move to lift the 1978 arms embargo on Southern Cyprus.

“If this embargo is lifted, it would encourage Southern Cyprus to arm itself and exacerbate instability in the region as well as hurt peace talks,” she said, referring to the decades-long, on-and-off peace talks between the two sides of the island.

In 1974, following a coup aimed at Cyprus’s annexation by Greece, Ankara had to intervene as a guarantor power. In 1983, the TRNC was founded.

The decades since have seen several attempts to resolve the Cyprus dispute, all ending in failure. The latest, held with the participation of the guarantor countries — Turkey, Greece and the U.K. — came to an end without any progress in 2017 in Switzerland.

“I think that the tension in the region will continue as long as both the EU and the U.S. fail to change their unilateral attitudes on oil and natural gas exploration around Cyprus and the Eastern Mediterranean as well as areas of maritime jurisdiction,” Guney added.

According to Aslan, Turkey’s move was a political message for Israel, Egypt, Greece, and the Greek Cypriot administration on the island, all of which signed a deal for gas exploration.

Lebanon and Palestine are also part of this bloc in a wider perspective, according to Aslan.

“Actors such as Italy and France began to establish a military presence in the region and carried out exercises with the Southern Cyprus administration.

“Turkey’s reinforcement of its military presence in the region is a response to the steps of France, Italy, Greece and the Greek Cypriot administration on the island,” he added.

“Turkey has been an important game-changer, especially with the deal signed with Libya,” Guney said, referring to a Nov. 27 agreement between Ankara and the Tripoli-based Libyan government.

The deal focuses on two separate memorandums of understanding (MoU), one on military cooperation and another on maritime boundaries of countries in the Eastern Mediterranean.

The memorandum on maritime boundaries asserted Turkey’s rights in the Eastern Mediterranean in the face of unilateral drilling by the Greek Cypriot administration, clarifying that the TRNC also has rights to the resources in the area. It went into effect on Dec. 8.

Guney said that with the deal with Libya, Turkey “pushed back” any challenge in the region against itself or Northern Cyprus.

“The most significant proof of this is Israel’s attempt to negotiate with Turkey,” she added.

On Sunday, Israeli state radio station claimed that Turkey was ready to negotiate with Tel Aviv on transferring Israeli natural gas to Europe.

“Ankara has expressed its willingness to enter into negotiations with ‘Jerusalem’ [Tel Aviv] on transferring Israeli gas supplies to the European continent through Turkish territory,” reported state-run Kan radio.

“Even with the increased tensions during this process [of the Turkey-Libya deal], after a certain point — with Turkey’s balanced moves –negotiations would be possible,” Guney said, adding but “not yet.”

With US ties on verge of total collapse, Turks set eyes on Libya
Next
Loading...
Loading...
We use cookies to ensure that we give you the best experience on our website. If you continue to use this site we will assume that you are happy with it.Ok