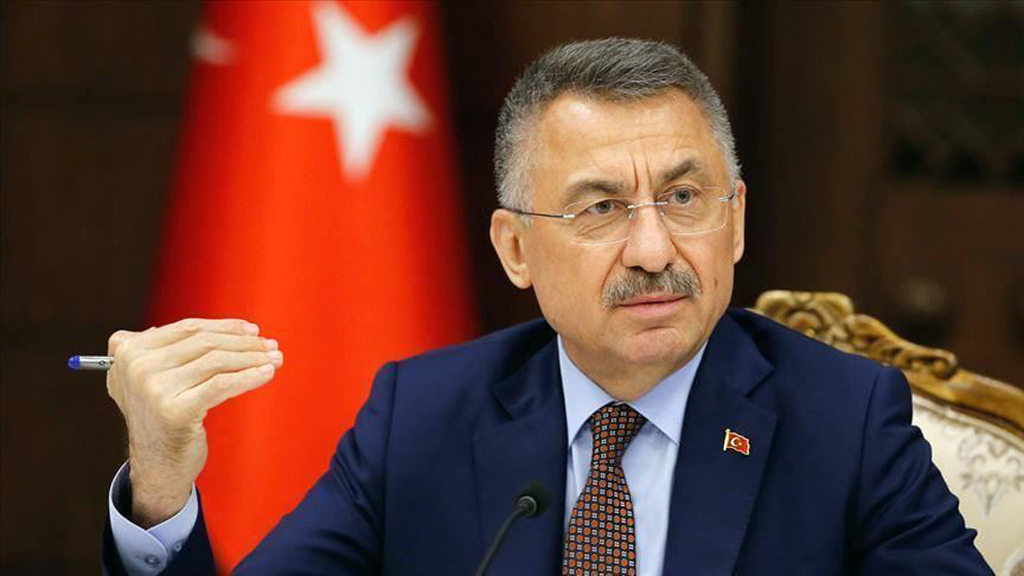 Oktay warned that “no one can question” the deal “especially France,” during a webinar with the Foundation for Political, Economic and Social Research (SETA) think-thank in Washington.

The landmark deal signed last November lays out maritime boundaries between the two countries to establish an exclusive economic zone.

Regarding the US’ decision to lift an embargo on Greek Cyprus, Oktay said it “poisons the regional peace and stability environment.”

Washington said Tuesday it is partially lifting an arms embargo on Greek Cypriots. The announcement received immediate condemnation from Turkey because it “ignores the equality and balance between the two peoples on the island.”

Turkey surveys only on its continental shelf

On Ankara’s seismic survey in an area south of Meis Island, or Kastellorizo, the vice president emphasized that Turkey is doing work only on its continental shelf.

He noted that Greece cannot question Turkey, which has the longest coastline in the region and the continental shelf is “4,000 times bigger” than the island. “Would you expect Turkey to accept it?,” he stressed.

Oktay said the island was supposed to be demilitarized based on agreements because it is so close to Turkey but is now militarized. “That is directly concern of Turkey,” said Oktay.

After Athens objected to Ankara’s seismic survey in the area in July, German diplomatic efforts helped defuse tensions between Turkey and Greece.

But Greece’s controversial move to sign a maritime delimitation agreement with Egypt, which Turkey says violates its continental shelf and maritime rights, has sparked further tensions between the two neighbors with Ankara accusing Athens of pursuing maximalist policies in the Eastern Mediterranean.

The relationship and close cooperation with the US have become “more important” recently as “challenges are more asymmetric, unpredictable and multi-faceted than ever,” Oktay said.

“This is why the deteriorating bilateral defense cooperation environment is of great concern,” he said, referring to ties between two countries regarding Turkey’s purchase of a Russian air defense system.

“In the face of clear and present ballistic threats, emanating from our immediate neighborhood, Turkey made the sovereign decision to procure S-400 systems in the unfortunate absence of other alternatives from our allies including the U.S.” the vice president reiterated.

“This impasse is also the direct result of the failure of certain political circles in Washington to grasp the full extent of our strategic alliance and Turkey’s contributions to regional and global stability,” Oktay said, accusing US Congress members of pursuing “deliberate efforts to damage our bilateral relations by prioritizing personal short-time political interests.”

“This behavior manifests itself in the unfounded calls for sanctions against Turkey, as well as in blocking deals which are bound to improve the Turkish-US defense cooperation,” he said.

Oktay underlined that once the negativity surrounding the rhetoric about Turkey is abandoned, he has no doubt bilateral relations will begin to heal. When asked about the upcoming US elections, Oktay said Turkey will do its best to constructively work with whomever is elected US president Nov. 3.

There can be “no military solution” in Libya, said Oktay, reiterating that Turkey “has been loud and clear from the onset of the conflict.”

He said Aguila Saleh, the pro-Haftar head of the Tobruk-based parliament, and the UN-recognized Government of National Accord (GNA) is trying to negotiate but warlord Khalifa Haftar has already ruled out talks.

The vice president said while the GNA seeks a solution in Jufra and Sirte, eastern groups are trying to take Jufra out of the equation, which is “critical” for the GNA to have a “sustainable solution” to the conflict.

Libya has been torn by civil war since the ouster of late ruler Muammar Gaddafi in 2011. The GNA was founded in 2015 under a UN-led agreement, but efforts for a long-term political settlement failed because of Haftar’s military offensive.

The UN recognizes the government headed by Fayez al-Sarraj as the country’s legitimate authority as Tripoli has battled Haftar’s militias since April 2019 in a conflict that has claimed thousands of lives.

French President Emmanuel Macron’s two-day visit to Lebanon as an “unwanted guest” and his presence is making a humanitarian crisis “even more complex,” said Oktay.

A massive explosion Aug. 4 at the Port of Beirut left 182 dead, more than 6,000 injured and hundreds missing, as well as extensive property damage and losses estimated at $15 billion.

“The colossal explosions in Beirut last month were devastating and require urgent international attention,” Oktay said. “We are committed to increasing our humanitarian assistance to this country to heal its wounds. Tomorrow another ship, full of humanitarian aid, will be leaving from Turkey for Lebanon.”

“A stable Lebanon is a must for the stability in the Middle East,” he added.

Greece comes to an impasse between West, neighbor Turkey
Previous

Fire in waters: Great Game in Mediterranean to contain Turkey
Next
Loading...
Loading...
We use cookies to ensure that we give you the best experience on our website. If you continue to use this site we will assume that you are happy with it.Ok