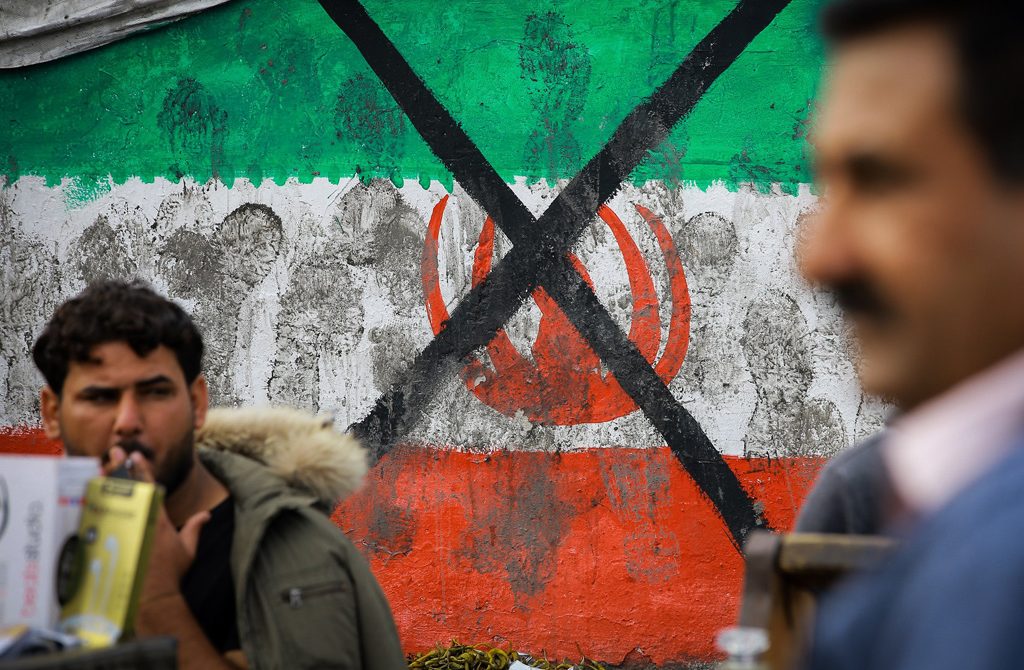 Protestors pass by a defaced painting of the Iranian flag during a rally against the breach of Iraqi sovereignty by the U.S. and Iran, Baghdad, Iraq, Jan. 10, 2020. (Photo by Getty Images)

Turkey-Iran relations and their presence in Iraq

Besides Shiism, when it serves Iranian national interests, the religion of Islam is also used as an instrument of its foreign policy.

Iran has been following a predominantly sectarian foreign policy since the early 1980s. In order to achieve its regional objectives, on the one hand, Iran has established some proxies such as Ansarullah and Hezbollah in different regional Sunni states.

On the other hand, it has mobilized Shiite populations in other countries against Sunni regimes such as the Gulf monarchies. In other words, since then, Shiism has been used as one of the main instruments of Iranian foreign policy.

However, although Shiism constitutes the majority of its population, Iran has been following a “minority-minded foreign policy” towards the Muslim world. Despite claiming to have a pan-Islamic political perspective, Iran often follows a zero-sum policy towards the Sunni world in order to defend its national interests in the region.

Therefore, for Iran, the division of the Sunni world serves the Iranian interests the best.

For instance, whenever Iran is under heavy pressure from the Western countries, it has called regional countries, mostly Muslim states, to collaborate on regional issues.

Nevertheless, whenever it agrees with the Western world, it otherizes the Muslim countries. Among the others, Turkey has experienced these ups and downs for a long time.

Some of the most recent developments in the region remind us of this Iranian traditional foreign policy understanding.

After Joe Biden came to power in the U.S., Iran’s hope for returning to the nuclear deal and for normalizing its relations with the U.S. has increased. That is, compared to with the Trump administration, it needs Turkey and other regional countries less.

Therefore, many Iranian officials began to criticize Turkey, the leading Sunni Muslim state in the region, for its defensive operations in the region. For example, Iranian Foreign Minister Javad Zarif expressed that they “reject Turkey’s military existence in Syria and Iraq” and claimed that Turkish “foreign policy is wrong.”

Following Zarif’s footsteps, Iraj Masjedi – who is Iran’s ambassador to Iraq, was a member of the Revolutionary Guard for more than 35 years and was also one of the former top advisors to Qassem Soleimani – has claimed that “Turkey must leave Iraq and respect borders.”

In the same line, Iranian-backed militias attacked the U.S. base in Irbil. This was a direct act of intimidation against the U.S. and an indirect message to Turkey’s military campaign in northern Iraq. Thus, Iran has been trying to gain the upper hand in the region.

As mentioned above, these and similar explanations are generally made by the Iranian officials when the U.S. is expected to improve its relations with Iran.

In other words, whenever Iran attempts to raise the stakes for the U.S. government and is close to signing an agreement with the U.S., it behaves in an arrogant manner towards regional actors.

However, when it comes to Iraq, both Iran and the U.S. continue to control the state policy. Iran politically entered Iraq after the invasion of the country by the U.S. in 2003.

The U.S. and Iran have “worked together” to build a “new” but “dependent” Iraq. Each state has established some proxy institutions within the Iraqi state, and now the Iraqi state is divided between the Iranian and the American spheres of influence.

While the U.S. is more effective in the official structure, Iran has intervened in Iraq’s domestic affairs mostly through non-official institutions.

For example, the Iranian-backed Hashd al-Shaabi (Popular Mobilization Forces – PMF) militias, which are used not only against Daesh but also against the Sunni population, are considered a “state within the state” by many observers.

In spite of the heavy intervention of the U.S. and Iran into the domestic affairs of Iraq, Iran blames Turkey for taking measures against terrorist infiltrations from Iraq into Turkey and opposes Turkey for using its legitimate rights for self-defense.

Therefore, as pointed out by Fatih Yıldız, Turkey’s ambassador to Baghdad, Iran is the last state to teach Turkey a lesson regarding Iraq.

While Turkey’s presence is limited to some parts of the country for self-defense, Iran has established its presence throughout the country. Not just the pro-Iranian Iraqi militias but also the Revolutionary Guard have spread across Iraq, shaping the policy of the state.

All in all, Iran has to stop its counterproductive policies and minority-minded regional perspective in order to escape from its perceived encirclement.

Turkish officials may speak up against the Iranian presence not only in Iraq and Syria but also its presence through its proxies in other regional countries such as Yemen (Ansarullah) and Lebanon (Hezbollah).

Biden kicks MBS-Khashoggi case out of bounds
Next
Loading...
Loading...
We use cookies to ensure that we give you the best experience on our website. If you continue to use this site we will assume that you are happy with it.Ok