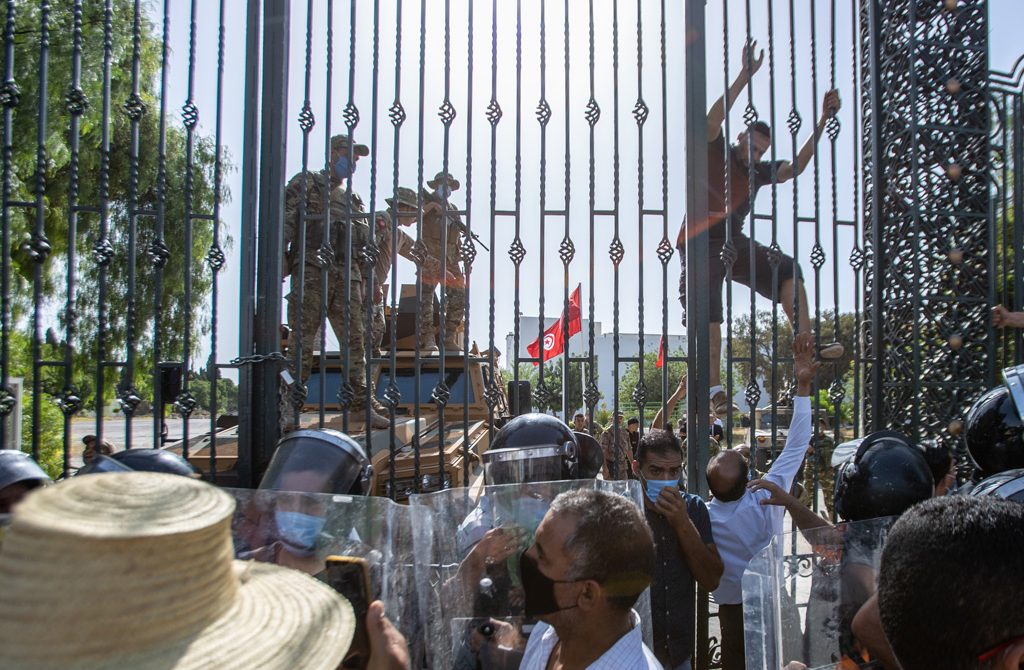 The populist coup in Tunisia

Tunisia's young and fragile democracy was shaken by this populist coup. What happens next boils down to defending oneself and democracy through peaceful means

Tunisia, the only post-Arab Spring democracy, faces a deep crisis. President Kais Saied on Sunday night announced parliament’s suspension for one month, stripped all parliamentarians of their immunity, sacked Prime Minister Hichem Mechichi and declared that he would take over the executive branch by handpicking the next prime minister.

To be fair, the most serious crisis since the “Jasmine Revolution” of 2011, had been brewing openly in the country. Nationwide protests had broken out in January over the coronavirus pandemic, public services, unemployment and corruption allegations.

Saied and Mechichi experienced serious problems during the same period, as the former refused to approve the appointment of 11 cabinet ministers, including Mechichi’s interior minister.

Moreover, a letter was leaked to the press in May, whereby Saied’s advisers urged him to seize control, citing Article 80 of the Tunisian Constitution. Indeed, the president pulled the trigger, as recommended in said letter, following a series of anti-government protests on republic day.

Saied, who won the 2019 presidential election in the second round, is a professor of law. As an outsider, the Tunisian president is known to oppose all political parties. Saied, who advocates direct democracy at the expense of representative democracy, has a certain populist side – which enables him to click with the masses, which have been unhappy with the parliamentary system’s shortcomings since 2011.

In recent months, the Tunisian president single-handedly brought the government to a standstill, thus paving the way for mass protests. The offices of Ennahdha, Tunisia’s largest party, became the target of multiple attacks in the process. Having suspended the legislative branch, Saied seized all executive and judicial authority.

It remains unlikely, however, that the Tunisian president will solve his country’s political and economic problems – despite having staged a coup d’etat with the military’s help. Thinking back to the 2013 coup in Egypt, he probably believes that the Gulf states will send cash to Tunisia. It is no secret that the United Arab Emirates (UAE) had been active in that country for some time. As such, the most recent developments in Tunisia may be part of a renewed effort by the Gulf’s status quo powers.

Rached Ghannouchi, the parliamentary speaker and Ennahdha leader, along with the Al Karama party, also known as the Dignity Coalition, chairperson and former President Moncef Marzouki, described Saied’s actions as “a coup attempt against the revolution and the Constitution.” They called on the Tunisian people to resist the coup plotters – an attempt to accomplish what the Turks did on July 15, 2016.

Tunisia’s young and fragile democracy faces a serious challenge. Saied’s populist coup not only hints at the political crisis in Tunisia, arguably the Arab world’s only democracy. At the same time, it threatens to end the most successful attempt to reconcile Islamists and democracy in the Arab world. Indeed, the Libyan putschist Gen. Khalifa Haftar, immediately associated the Tunisian coup with the Muslim Brotherhood, arguing that the anti-MB revolt had eliminated the single greatest obstacle before Tunisia’s progress.

It remains unclear whether Saied will target Ghannouchi and identify him as mainly responsible for what happened. Egypt’s Abdel Fattah el-Sissi, however, served as a negative example before the Tunisian president. Saied’s advisers will almost certainly urge him to follow in the Egyptian’s footsteps for a few billion dollars.

Ennahdha and its leader Ghannouchi subscribed to a balanced approach to politics over the past decade. They made concessions to secularists by not contesting presidential elections and forming coalitions with leftist and liberal movements. Indeed, Ennahdha declared in 2016 that there was no room for political Islam in Tunisia, describing themselves as Muslim Democrats. At its tenth congress, the movement even announced that it would draw a clear line between the religious organization and the political movement.

This latest crisis represents the most serious challenge that Tunisia’s democracy, not to mention Ennahdha and Ghannouchi, faces. It is about defending oneself and democracy through peaceful means. Turkey came out against the “coup against the constitutional order” and called for the restoration of democracy without delay. To nobody’s surprise, the Western governments have kept their silence. Once again, they seem to worry only about their vested interests instead of promoting values.

How to discuss the Syrian, Afghan migrant issue
Next
Loading...
Loading...
We use cookies to ensure that we give you the best experience on our website. If you continue to use this site we will assume that you are happy with it.Ok