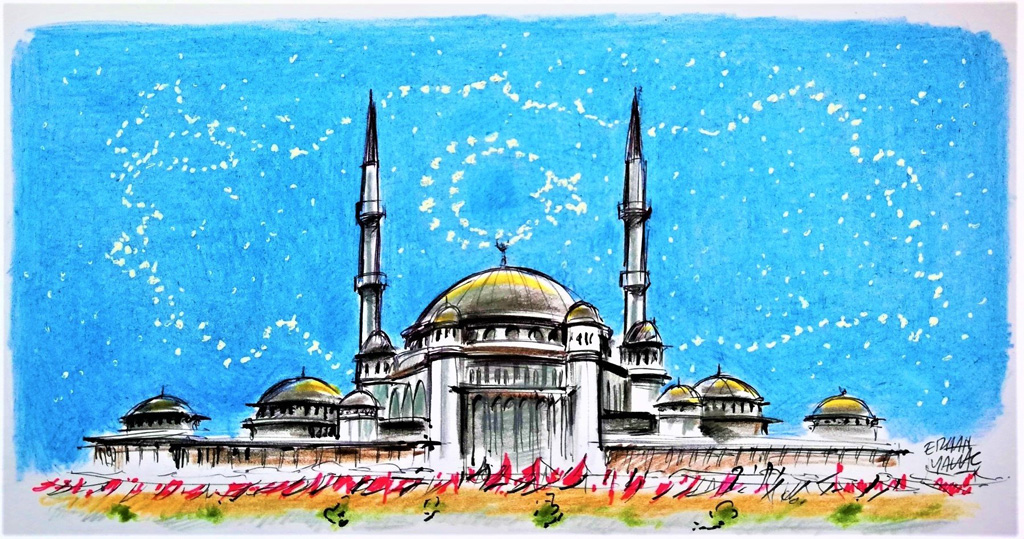 Another blessed opening ceremony took place on May 28, as Turkish President Recep Tayyip Erdoğan made a '150-year-old dream' come true by unveiling the Taksim Mosque. May this new mosque serve the Muslim world, the Turkish people and all Istanbulites well.

Another blessed opening ceremony took place on May 28, as Turkish President Recep Tayyip Erdoğan made a “150-year-old dream” come true by unveiling the Taksim Mosque. May this new mosque serve the Muslim world, the Turkish people and all Istanbulites well.

Leaders engage in politics to pursue their dreams and to keep their promises to the people. There are some rare moments, amid the hustle and bustle of political fights, whose glimmer brings together the leader and the nation. Erdoğan’s construction of the Grand Çamlıca and Taksim mosques, along with the reopening of the Hagia Sophia, were such moments.

On May 28, Erdoğan, who loves Istanbul, kept his promise to his city’s residents – a promise made back in 1994 – and made his own dream come true. Indeed, the Turkish president has delivered such great services to Istanbul and Turkey that he is racing against himself.

Over the past 27 years, Erdoğan completed a series of megaprojects that elevated Istanbul to the level of some of the world’s top cities. A number of great works, from Marmaray and the Eurasia Tunnel to the Istanbul Airport and Yavuz Sultan Selim Bridge, immediately come to mind.

Needless to say, the construction of the Grand Çamlıca and Taksim mosques (and the reopening of the Hagia Sophia) were particularly strong symbols.

Indeed, Erdoğan described the Taksim Mosque as “one of the signs of the birth of a great and strong Turkey.” He noted that Friday’s ceremony was “a nod to the Hagia Sophia Grand Mosque” and “a gift on the occasion of the 568th anniversary of the conquest of Istanbul.”

Some of Turkey’s secularists are unhappy with that symbolism. Claiming that the city did not need a mosque in Taksim, they describe this latest work as “ideologically charged” and “a show of intellectual and cultural power.” They see the mosque as a symbol that stands against “the symbols of the secular Turkish republic.”

It is a fact that strong governments tend to carry out transformations in various areas and initiate symbolic works.

The Justice and Development Party (AK Party) chairperson, too, has made a critical impact on Turkey’s course with his actions, choices and statements.

Among the services Erdoğan has rendered to the people of Turkey was to make the dreams of conservative Muslims come true. The toppling of the secularist tutelage, the abolishment of the headscarf ban and the liberalization of religious instruction support that claim.

He also boosted the self-confidence of religious people to help them confront the world. The Hagia Sophia’s reopening and the construction of the Grand Çamlıca and Taksim mosques also support that view. One could certainly come up with more examples.

What matters is what purpose those symbolic services and works serve – and what they oppose. It makes no sense to attempt to position Erdoğan’s brand of politics “against the Republic.”

Quite the contrary, he subscribes to a political view that positions the Republic as a supreme value for all social groups. Hence his efforts to curb the extremism of pro-Western positivist modernism, which was dominant over the Ottoman-Turkish modernization for two centuries. He also made notable accomplishments on that front.

That’s why the Taksim Mosque represents a fresh step toward the realization of the nation’s will. It is an embodiment of the Turkish people’s religious needs and national self-confidence.

One could call it “the integration of the center and periphery” or “the final cornerstone of Turkey’s century-old quest for normalization.” One could also call it “a sign of the Turkish people’s ability to create their own modernity.”

There is no need for ideological concerns or rhetorical fights. May this blessed opening serve our nation well. The Taksim Mosque is indeed a gift for the Republic’s second century.

As the Erdoğan-Biden meeting approaches...
Previous

Constant change in Middle Eastern dynamics
Next
Loading...
Loading...
We use cookies to ensure that we give you the best experience on our website. If you continue to use this site we will assume that you are happy with it.Ok