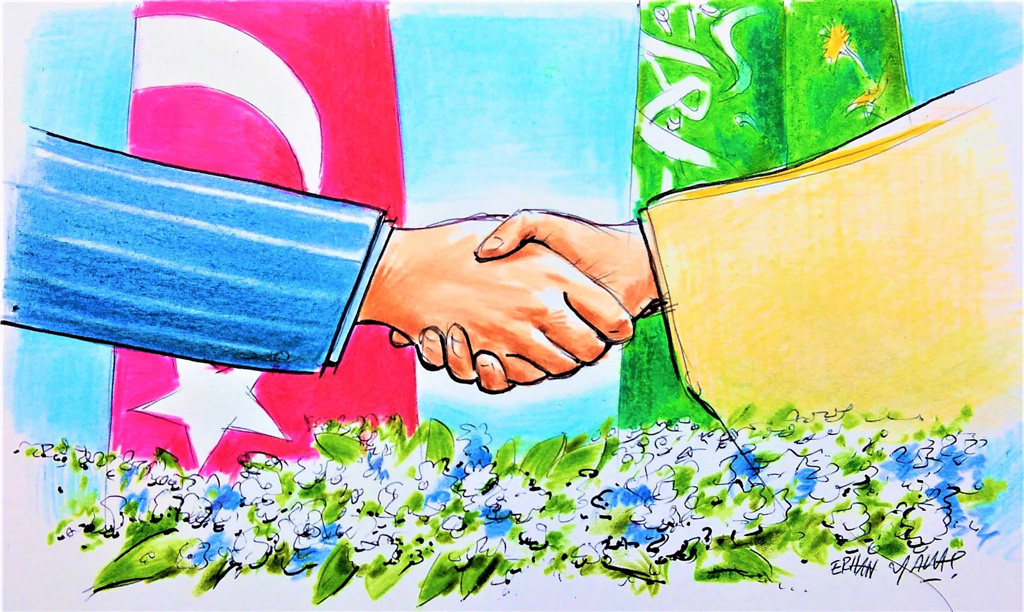 Two people shake hands in front of the flags of Turkey (L) and Saudi Arabia in this illustration that symbolizes the recent momentum in bilateral relations by Erhan Yalvaç.

The progress of Turkey’s normalization policy attracts attention at home and abroad. Over the past year, this policy has accomplished a great deal. Having visited the United Arab Emirates (UAE), President Recep Tayyip Erdoğan paid a visit to Saudi Arabia last month to start a new chapter with the country. Indeed, a strong rebound in trade, tourism, education and public tenders has already begun. Furthermore, the two countries are expected to take joint steps vis-a-vis the defense industry to address Riyadh’s regional security concerns, starting with the Houthis.

On his flight back from Saudi Arabia, Erdoğan hinted to a group of journalists, including yours truly, that the normalization policy could soon extend to Egypt. He announced that there were positive talks between intelligence officials and business people, which could lead to high-level contacts. “The people of Egypt and Turkey have lots and lots in common. As such, we cannot simply pretend that the Egyptian people do not exist. Our hearts yearn for ensuring unity and solidarity without further delay, because I believe that regional peace and the region’s unity will be taken much further as soon as we accomplish that,” the president said. This statement shows that the rationale behind Turkey’s normalization policy is preserving the fraternity and well-being of all peoples.

Having demonstrated its commitment to “respecting the people’s will” in the past, Ankara now turns over a fresh leaf to promote order in the region as well as peace and unity among its peoples. Undoubtedly, all regional players have already revised their respective positions from six or seven years ago. Indeed, the containment policy of the Gulf states and Israel, which targeted Turkey, has also failed. Under the circumstances, normalization serves Turkey’s interests and the interests of all others. Everyone claiming that normalization occurs because the other side “wants and needs normalization” is hardly surprising. What matters is which country will make the best use of the process. My sense is that Turkey will manage it much more effectively than others under Erdoğan’s leadership and will accomplish many things in the region.

Some commentators criticize the government’s normalization policy, which yielded positive results over the last year, on “ethical” grounds. It is quite curious that those same people used to highlight the importance of Realpolitik, arguing that the ruling Justice and Development Party (AK Party) had undermined Turkey’s relations with the UAE, Saudi Arabia and Egypt on the basis of “values.” They used to say that the government’s policy had resulted in Turkey’s isolation. Nowadays, however, they portray the push to end all tensions with the United States, the European Union, Greece, Armenia, the UAE, Saudi Arabia, Israel and Egypt as “unprincipled” and “incoherent.” Personally, I posit that the opposition’s criticism of the normalization policy is really about domestic politics.

As such, the argument that the government “should have acted sooner” and “would not have needed a radical shift” had it not undermined Turkey’s relations with those nations is linked to the positive atmosphere that this foreign policy has created for the AK Party. Likewise, the opposition is unhappy with the normalization policy’s positive consequences, such as the success of Turkey’s active diplomacy vis-a-vis the war in Ukraine. Ironically, the collapse of certain anti-Turkish alliances in the Eastern Mediterranean and the Middle East and the emergence of new areas of opportunity serve the national interest, regardless of who governs Turkey. Indeed, that accomplishment will play a major role in finding an appropriate solution to the Syrian conflict.

Thanks to his credibility in the eyes of Middle Eastern and Arab peoples, Erdoğan attracts attention with this normalization policy. He can communicate policy changes to those audiences as a leader that cares about the Muslim world’s problems and argues that “a fairer world is possible.” Most importantly, the Turkish president can explain the rationale behind tensions and normalization with those countries to the Turkish people. That is why the opposition’s complaints do not really matter. At the end of the day, the people will judge the policy by the results. They will focus on the impact of that foreign policy on Turkey’s international standing and economy. In this sense, communicating this new direction to the Turkish people is not the main challenge before Turkey’s normalization policy. It is the proper synchronization of those simultaneous normalization processes and translating them into a strategic balance of power in the region. It is the ability to manage conflicts of interest and competition at the same time so that a new regional order can be built and security is achieved.

Is there a chance for sustainable cease-fire in Ukraine?
Next
Loading...
Loading...
We use cookies to ensure that we give you the best experience on our website. If you continue to use this site we will assume that you are happy with it.Ok