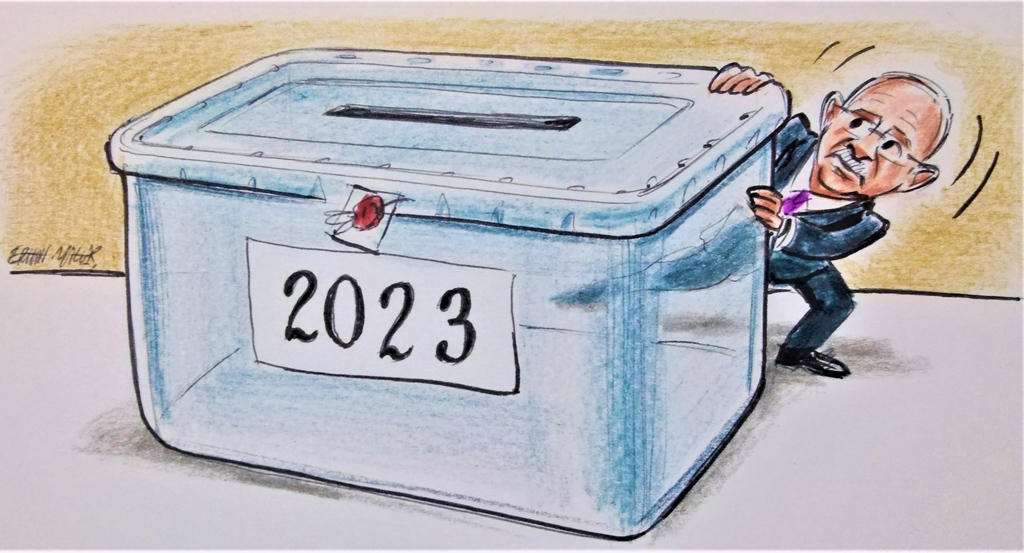 An illustration of the Republican People’s Party (CHP) Chairperson Kemal Kılıçdaroğlu hiding behind the ballot box for 2023 general elections in Türkiye. (Illustration by Erhan Yalvaç)

In recent months, Türkiye’s political opposition has significantly lost its ability to set the agenda. The government’s social housing plan and other measures taken for low-income citizens, together with President Recep Tayyip Erdoğan’s foreign policy during the ongoing war in Ukraine, have been fueling its progress.

Indeed, the perception of Erdoğan as a leader to guide Türkiye in an increasingly uncertain world has come to be shared even by the opposition. In this regard, the argument that “they won’t be able to sit across from Russian President Vladimir Putin” has been used against Kemal Kılıçdaroğlu, the Republican People’s Party (CHP) chairperson, or someone that he will handpick. Yet it also attests to an undeniable truth.

The fact that the same arguments the government’s supporters used to make have become increasingly popular among the opposition undermines the latter’s morale. There is more and more talk of the supremacy of Erdoğan – who is able to speak with Russia and Ukraine, who carves out new space to maneuver through the normalization policy and who pursues renewed integration in the Turkic world in foreign policy. The leadership crisis in Britain and Europe, too, causes many voters to be grateful for Erdoğan.

The CHP head fuels his presidential bid by arguing that the people should give him a chance, but his attempts to dictate the political agenda have been backfiring. His call to pass a law on the headscarf and his trip to the United States – which even his supporters have found unsuccessful – provided the People’s Alliance with new campaign themes: A constitutional amendment for the headscarf (by referendum, if necessary) and emphasis on the family have emerged as key policy areas for Erdoğan.

Kılıçdaroğlu, who has taken some steps to reassure Türkiye’s conservatives, created a fertile ground for Erdoğan that he himself had not anticipated. As the perception of Erdoğan as a strong leader only grows stronger, the candidacy debate in the opposition evolves into a black hole that consumes its energy and self-confidence.

Continuously stirring the debate on his candidacy enables Kılıçdaroğlu to impose his name on Meral Akşener, the Good Party (IP) chairperson, and the “table for six.” Yet his potential announcement as the opposition’s joint presidential candidate, too, would fail to excite anyone. By contrast, much will be said if that does not turn out to be the case. In that case, Kılıçdaroğlu will quickly be criticized as a politician who could not even receive the opposition’s endorsement. Moreover, the extended process of announcing the candidate makes it impossible for the opposition to create a new kind of political atmosphere.

If the opposition block ends up picking Kılıçdaroğlu, the people will simply think that “they have finally made the announcement.” In this case, Erdoğan, who has already kicked off his campaign by relying on Kılıçdaroğlu’s candidacy, will have plenty of ammunition at his disposal. Indeed, all the negative things that the opposition has already said about the CHP chairperson would be enough to run that campaign.

There is no doubt that the Turkish economy’s performance and the living standards of low-income citizens will be among the most important issues on the campaign trail. In addition to the economy, however, key identity issues and foreign policy/national security will play an influential role in domestic politics.

It goes without saying that the popular perception of Erdoğan as a strong leader has been consolidated by his diplomatic achievements and performance in the fight against terrorism. In truth, foreign policy represents an area in which the AK Party has transformed Türkiye since 2002. Today, Erdoğan manages that area with two decades of experience.

Foreign policy might not be enough to win an election alone, but it represents a force multiplier in combination with the Turkish president’s political mastery. Judging by the lack of morale, warnings and fierce criticism of potential candidates, that is quite obvious.

Vision of 'Türkiye's Century’ and the opposition bloc
Next
Loading...
Loading...
We use cookies to ensure that we give you the best experience on our website. If you continue to use this site we will assume that you are happy with it.Ok