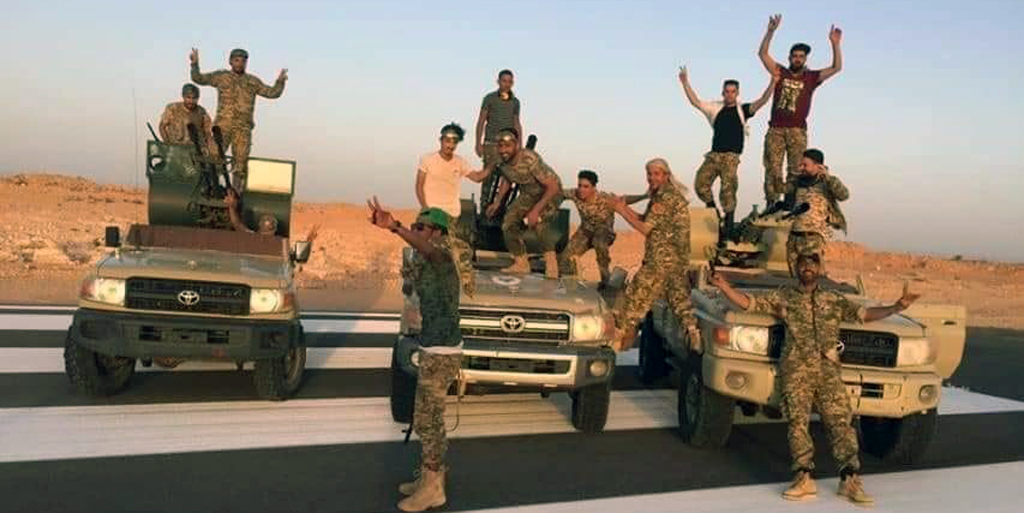 Members of The Libyan Army celebrate after they liberated the strategic Bani Waled city, where warlord Khalifa Haftar left in Libya on June 05, 2020.

The Libyan government may now go on to secure control of the entire country, having wrested strategically important positions from forces loyal to renegade general Khalifa Haftar, said the head of an Ankara-based think tank on Friday.

Burhanettin Duran, the director of the Foundation for Political, Economic and Social Research (SETA), commented on the latest developments in war-stricken Libya — where the internationally recognized government has recently secured significant gains against Haftar.

On May 18, the Libyan army liberated the Al-Watiya airbase, a key military position to the west of Tripoli as armed drones destroyed many of Haftar’s air-defense platforms that had been provided by the United Arab Emirates (UAE).

In May, the army’s campaign continued its advance in an effort to rid the area surrounding Tripoli of militias and secure control of numerous strategic military camps. Meanwhile, the Russian mercenary group Wagner withdrew from the area as the army finally liberated Tripoli Airport as well.

Duran said Haftar’s backers, such as the UAE, Egypt, Russia, Greece, Jordan and France, would step up their calls for a cease-fire and diplomacy when they realized Turkey would completely defeat Haftar’s forces.

The government should represent the entire country, he added, underlining that it had been Haftar and his foreign supporters who had dragged the war-weary country into chaos.

Arguing that foreign support for Haftar had deepened the situation in Libya, he said all countries should back the UN-recognized government, Duran said that while Italy and Qatar supported Libya to some extent, Turkey was the main force behind the Libyan administration.

Turkey’s intervention in Libya changed the course of the conflict. Haftar had gained the upper hand with weapons from the UAE, Egypt and Jordan, as well as the intervention of Russian mercenary company Wagner, he said, adding that Tripoli had been about to fall into the hands of the putschist commander.

“If not for Turkey’s intervention, Tripoli would have fallen and Libya handed over to a military administration prioritizing the interests of foreign actors,” he said. “The Turkish intervention shifted the balance completely and paved the way for a political resolution on a civic and democratic basis.”

According to Duran, factors such as Turkish armed drones, military consultancy and the diplomatic efforts of Turkish President Recep Tayyip Erdogan changed the military and political climate of the country bolstering the Libyan government while the pro-Haftar coalition faced internal problems.

“Many military, social or tribal actors either neutral or close to Haftar have started to turn towards the GNA,” he said.

The recent developments of Russian Air Force jets in Libya, reported by the US AFRICOM, may change the course of military developments, according to Duran.

He said there was a possibility that the Russian planes could strike government forces and rebuff defensive and offensive lines set by Turkey, though this may not play out well for Moscow in the international community.

Referring to two “important” summits held in early this year months in Berlin and Moscow, he said the latest developments on the ground were likely to intensify diplomatic efforts to resolve the conflict.

“If this pace [of GNA advance] continues, it is inevitable that Haftar’s forces will disintegrate,” he said.

Arguing that balance of power could shift suddenly in Libya and the pro-Haftar coalition could dissolve, Duran said this would allow the government to gain control of the entire country, though the UAE, France, Russia, Greece and Egypt will do their best to prevent this from happening.

He stressed that the government’s latest victories improved the army’s morale and military superiority, despite the majority of oil regions remaining under Haftar’s control.

He said France, which has had interests in the region since the colonial period, did not want Turkey to be a prominent actor in Libya and that Turkish influence would also limit Egypt’s ability to establish itself in the war-torn country via Haftar.

As for Russia, he said Moscow was playing a double game, as it maintained contact with both sides of the conflict, though it was known to back Haftar.

“Therefore, Russia would view the defeat of Haftar as a loss on its reputation,” he said.

Commenting on the other actors in the Libyan conflict, Duran asserted that countries such as Tunisia, Algeria, Qatar and Italy were pleased with the Libyan government’s protection and Turkey’s power.

Other actors, he added, would soon seek to join diplomatic talks in a bid to balance Turkey, saying they would increase pressure via diplomacy and other channels the moment they realized Turkey would defeat Haftar completely.

Stressing that the civilian death toll in the Libyan civil war was below those of Syria and Yemen, Duran underlined that the crisis in Libya could deteriorate if Haftar’s forces somehow gained control of the air space through heavy bombardment and support from the UAE and Russia.

Duran dismissed as “baseless” accusations against Ankara of “Neo-Ottomanism” and expansionism, saying Turkey’s actions were in line with international law and the UN concerning the Eastern Mediterranean and Libya.

He went on to say that the latest regional developments demonstrated that regional actors were not capable of “sharing” the Eastern Mediterranean in a way that excluded Turkey.

Duran said Turkey’s agreement with Libya was beneficial for Libyans, arguing that, unlike European countries, Turkey did not seek to impose its own interests.

The Turkish presence in the Eastern Mediterranean will pave the way for an equitable sharing of energy resources in the Eastern Mediterranean and hinder the expansionist policies of Greece, he said, adding that Ankara’s approach would contribute to the stability and security of Europe as well, thus also serving to the interests of European actors.

What's next after Minneapolis?
Previous