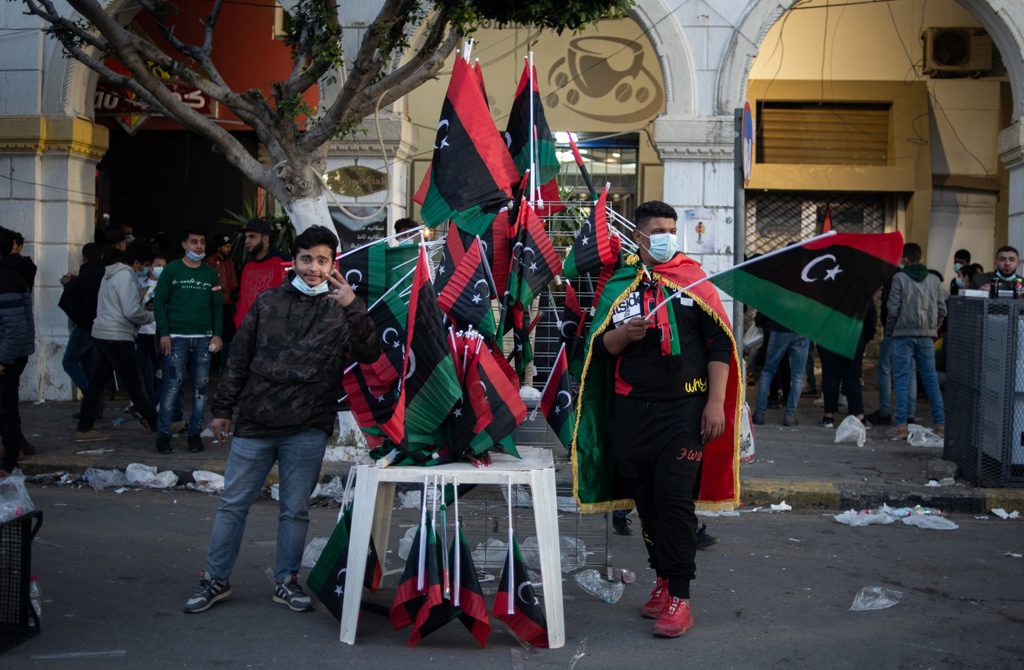 Men sell flags during a gathering to commemorate the tenth anniversary of the Arab Spring in Martyrs Square, Tripoli, Libya, Feb. 17, 2021. (Photo by Getty Images)

Libya is not ready for elections

According to a U.N. sponsored agreement reached by the rival political groups in the country in November 2020, Libya is currently preparing to hold both parliamentary and presidential elections on Dec. 24. However, most people and observers expect that the elections will not be properly held and will not end the civil war. There are many discussions and claims regarding the security and soundness of the elections.

Libya, which has remained a fragmented country for ten years since the overthrow of Moammar Gadhafi, is divided into two political entities. While the western part is controlled by the United Nations recognized Government of National Accord (GNA), the eastern side is under the control of Khalifa Haftar, the putschist general who attempted a coup in 2014 and tried to take over the capital in 2019. With the involvement of external forces, militias and foreign fighters, the civil war and the conflict between the warring sides has kept the country political and economically divided, penetrated and vulnerable.

According to a U.N. sponsored agreement reached by the rival political groups in the country in November 2020, Libya is currently preparing to hold both parliamentary and presidential elections on Dec. 24. However, most people and observers expect that the elections will not be properly held and will not end the civil war. There are many discussions and claims regarding the security and soundness of the elections.

First of all, the list of candidates has caused many questions. The election committee has not allowed about two dozen applicants to run for presidency, claiming that they do not meet the required criteria. Several controversial figures such as the current Prime Minister Abdul Hamid Mohammed Dbeibah, Saif al-Islam Gadhafi (son of Moammar Gadhafi), putschist Gen. Khalifa Haftar and the speaker of the House of Representatives Aguila Saleh have declared that they will run for presidency. The candidacy of these individuals is being widely discussed by the judicial authorities; different courts have cancelled the candidacy of some of these figures.

Haftar, who tried to take control of the country through military means, is now trying to establish a regime of personality via elections. Most of the Libyan people do not trust him, since he waged war against the legitimate government and killed thousands of people. However, he has the support of many external actors. First, Haftar knows well that he has the support of most Western powers, which do not want democratic regimes in the Middle East. Furthermore, he can easily get the unconditional support of personalistic regimes in the region.

There are too many questions regarding what Haftar represents. Due to the war crimes that he committed during his military campaign against Tripoli, his candidacy has come under scrutiny. It is widely known that he will not receive votes from the western part of the country, where the majority of Libyans live. However, with the support of his supporters, he will try to exploit the vulnerable conditions on the ground and will propose himself as a kingmaker. He can easily buy influence. For example, after the Court of First Instance in the city of Zawiya ordered the exclusion of Haftar from running for presidency, a large group of Libyan lawmakers, most of which are loyal to Haftar, made explanations criticizing Emad al-Sayeh, the head of the elections commission, and some other judicial authorities responsible for the execution of the elections over suspicions of fraud and vote-buying.

Second, it remains unclear whether elections will be held or not and whether the results of the elections will be accepted by the related sides or not. Without real peacebuilding, confidence building and reconciliation processes, it is very difficult to hold successful elections. In addition, the presence of thousands of foreign fighters, mercenaries and militias constitute a direct threat to the elections. It will be difficult to hold free and fair elections under the control of foreign fighters and militias.

If conflicting parties initiate a process of dialogue and engagement, a relatively less controversial figure, someone who is relatively neutral and does not have much political baggage, can be chosen as president as a sign of compromise. Furthermore, the normalization process between different regional states such as Turkey and the United Arab Emirates may have some implications on the Libyan crisis and the outcome of the elections.

However, this is made less likely due to the previous experiences of some Libyan politicians, such as Aguila Saleh, and also due to the operational role of external actors. Many agreements reached so far were not implemented and most probably the result of the coming elections will not be implemented either.

The obsession that the U.N. and some other actors have with the election process makes instability more likely. As an indication of failure, the international conference on Libya held in Paris on Nov. 12 did not produce any tangible results that will bring peace and stability to the country. Even if the regional countries agree to achieve peace and stability in Libya, global powers such as the U.S., Russia and France competing for the exploitation of Libyan resources will not allow the proxies to reach a final agreement. Therefore, it can easily be claimed that the forced elections will not bring peace to the country.

Erdoğan’s Qatar visit and new Gulf balances
Next
Loading...
Loading...
We use cookies to ensure that we give you the best experience on our website. If you continue to use this site we will assume that you are happy with it.Ok