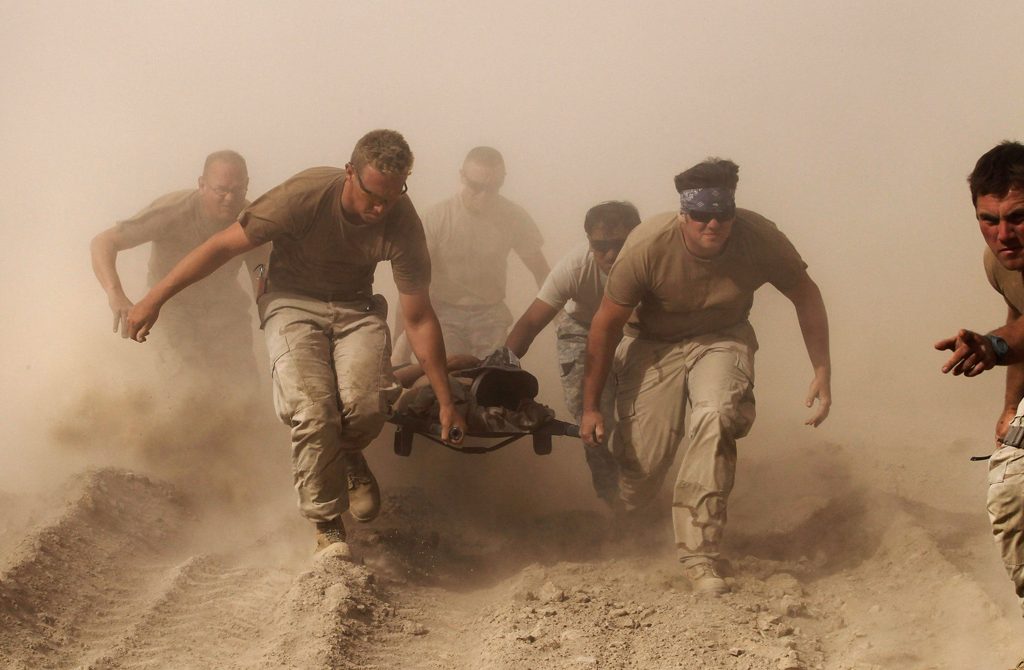 Members of the U.S. Navy carry a comrade wounded by an explosion to a medevac helicopter in the Kandahar province, southern Afghanistan, Oct. 2, 2010. (Reuters Photo)

Is Washington closing its Afghan chapter for good?

Last week U.S. President Joe Biden finally announced a deadline for the withdrawal of all the U.S. troops from Afghanistan. It was something that former U.S. President Donald Trump also wanted to do but could not achieve.

Last week U.S. President Joe Biden finally announced a deadline for the withdrawal of all the U.S. troops from Afghanistan. It was something that former U.S. President Donald Trump also wanted to do but could not achieve.

It was also something Biden wanted to be achieved when he was serving as the vice president for the Barack Obama administration. It was a well-known fact that while Obama wanted to have a surge of the U.S. forces, Biden had a different position and supported the removal of the forces from the country.

Before and after terrorism

Just like any other long wars, it was a difficult decision to make for the U.S. administrations. Almost 20 years ago, the U.S. forces launched a military operation to eliminate the terrorist forces that organized the biggest terrorist attack in U.S. history.

The operation intended to eradicate the potential breeding ground for these groups. It was after 9/11 and there was a major consensus in the U.S. and major support around the world in launching a military operation against Afghanistan and against the government of the Taliban.

For the first time, NATO initiated its Article 5 and rushed to support the U.S. operations. Around the world, there was a high degree of public sympathy supporting the U.S. against the terrorist forces. Afghanistan was supposed to be a short, decisive battle that would be a response to the 9/11 attacks.

In those days only a few approached the potential outcomes of a war with some skepticism. First of all, the U.S. recovered from the Vietnam syndrome with the first Gulf War. The U.S. was also enjoying the unipolar moment and many considered the U.S. military supremacy something unquestionable.

Furthermore, there was no major power to support al-Qaida or the Taliban government. In addition, the Northern Alliance provided an excellent partner for the U.S. forces on the ground.

Initial operations were as successful as they can get. In a rather short period of time, Kabul was under the control of the U.S. forces and its partners. Many thought that the war was over; however for 20 years now, in one way or another U.S. forces had to engage in this conflict.

Over time, public support for the war efforts also declined dramatically. It became the longest war the U.S. had engaged in its history. Since the beginning of the war in Afghanistan, the U.S. was involved in another long war in Iraq, which turned out to be another unending war for the U.S.

Now, the U.S. administration decided to withdraw its troops from Afghanistan. The reaction to the decision was mixed.

For some, it was the right thing to do so as there would be no military solution for the conflict with the Taliban.

For others, however, it would send a wrong message for the groups fighting against the U.S., and it would lead to a disastrous outcome, just like the developments in South Vietnam following the U.S. withdrawal.

There are six months until the withdrawal deadline and until this period, there will be extensive debates about the war in Afghanistan and the decision of the Biden administration.

The administration announced that the withdrawal will be irreversible; however, until Sept. 11, 2021, there will be a lot of discussion regarding the future of Afghanistan and what role the U.S. could play.

More importantly, there will be a lot of debates about the lessons learned from Afghanistan and what these lessons could teach the U.S. regarding future engagements.

Greece in panic as East Med balance serves Turkey
Next
Loading...
Loading...
We use cookies to ensure that we give you the best experience on our website. If you continue to use this site we will assume that you are happy with it.Ok