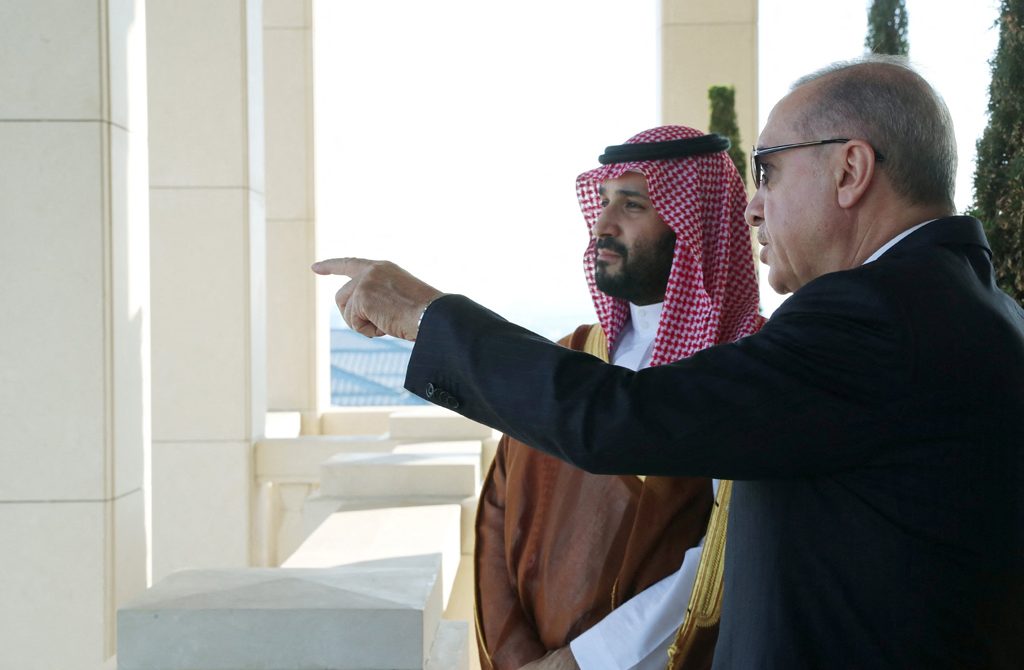 In the aftermath of MBS and Lapid’s visit to Ankara

Ankara hopes to be a balancing factor in the region that generates security and stability.

Those two official visits were significant because they demonstrated the concrete results of Turkey’s normalization policy and the country’s strengthening role in balancing the regional power equilibrium. It is especially important to note that the normalization process has been shaped by a mutual commitment, as opposed to a request by either party, so that the relevant expectations can be assessed on a rational basis. At the same time, the normalizing parties strive to ensure that their new relationship does not hurt the interests of third parties. Again, each normalization process has its own dynamics and influences the calculations of others.

Riyadh and Ankara are in a position to repair their relationship most quickly. The bilateral relations, which the murder of Jamal Khashoggi strained in 2018 and recovered during Erdoğan’s visit to Jeddah in April, could gain fresh momentum following MBS’ visit.

Indeed, the joint statement points in that direction. Accordingly, the two nations aim to strengthen their cooperation regarding trade, tourism, construction and energy, as well as the defense industry and new technologies. The statement also included a reference to Saudi Arabia’s Vision 2030 and a commitment to reactivating the Saudi-Turkish Coordination Council, whilst stressing the importance of Turkey-Gulf Cooperation Council (GCC) negotiations on a free trade agreement. Those points signal that the two states attempt to develop a long-term perspective in light of regional and global developments.

It was also significant that MBS’ visit took place ahead of U.S. President Joe Biden’s upcoming tour of the Middle East with stops in Israel, the West Bank and Jeddah. The Saudi leadership had been unhappy with the Biden administration’s treatment of Saudi Arabia as a “pariah” as well as Washington’s decision to stop supporting Riyadh vis-à-vis the civil war in Yemen, and the breathing room that the nuclear talks created for Iran.

The sharp rise in oil prices following the Russian invasion of Ukraine, however, compelled the Biden administration to normalize America’s relations with the Saudi leadership. To prevent his party from losing the midterm elections in November, the U.S. president wants the Saudis to increase their petroleum output. At the same time, Biden is expected to promote closer relations between Arab leaders and Israel, and to reassure U.S. allies in the Gulf regarding Iran.

Having turned over a new leaf in its relationship with Riyadh, Ankara finds an opportunity to play a more active role in the region against that backdrop. Meanwhile, Iran’s proxies and the progress of that country’s nuclear program, which ostensibly can build nuclear weapons, remain a source of concern for the entire region. That situation, in turn, encourages all countries in the region, starting with Saudi Arabia, to become nuclear powers themselves.

Indeed, Tel Aviv is among those capitals in the Middle East, which are most unhappy with Iran’s growing regional influence. Lapid’s visit to Ankara coincided with a kind of war between Tehran and his country. Israel has been carrying out attacks against Iran’s nuclear facilities, military settlements and scientists involved in that country’s nuclear program. Moreover, Tel Aviv has been talking about launching a new initiative against Iran’s armed drones, the Middle East Air Defense Alliance, in cooperation with Egypt, Jordan, the United Arab Emirates (UAE) and Saudi Arabia. Finally, ahead of the Israeli foreign minister’s visit, Turkey busted an Iranian spy ring.

During Lapid’s visit, it was announced that Turkey and Israel, which is heading to an early election, will take another step toward normalization by upgrading their diplomatic relations to the level of ambassador. Quite clearly, the normalization process is being handled with care, as former Israeli Prime Minister Benjamin Netanyahu is lurking in the shadows.

Ankara’s normalization with Israel and the Gulf states does not hurt the interests of any third parties, including Iran. Turkey opposes the emergence of ideological or sectarian blocs in the region. Nor does it want any single regional power to pose a threat to the rest. It also understands that any attempt to reshape the region, akin to what happened during Donald Trump’s presidency in the U.S., would only fuel conflict and hostilities. As such, Ankara hopes to be a balancing factor in the region that generates security and stability.

In this sense, the National Intelligence Organization’s (MIT) crackdown on spy networks acting on behalf of various countries are not only intended to send a message to Tehran. Other governments, too, are thus being told that they cannot carry out such operations on Turkish soil.

Report: Making Sense of Türkiye’s Role in the Future of NATO
Next
Loading...
Loading...
We use cookies to ensure that we give you the best experience on our website. If you continue to use this site we will assume that you are happy with it.Ok