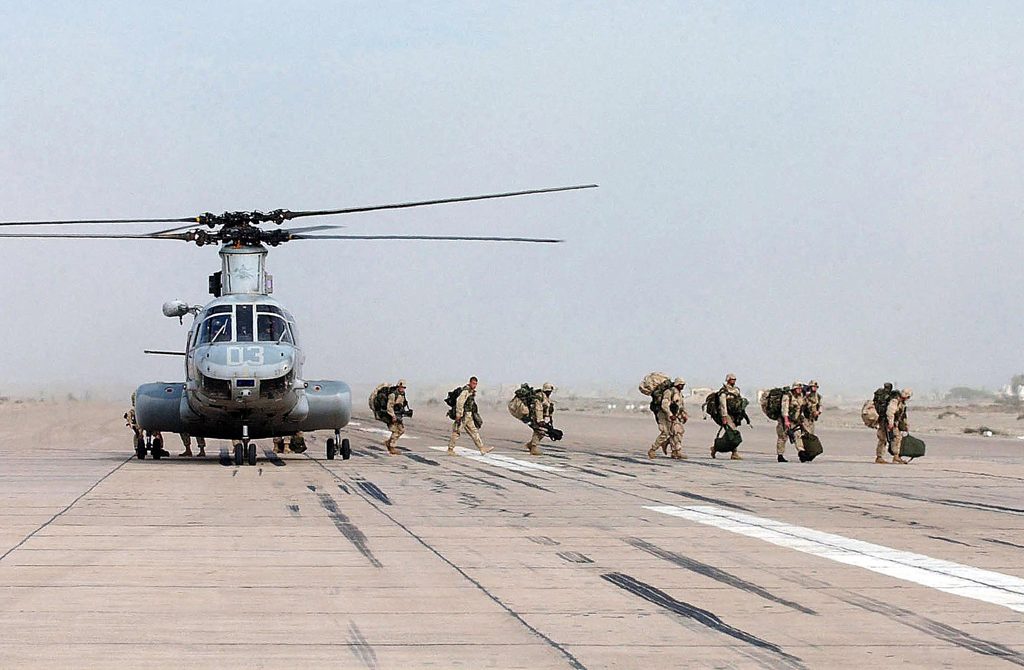 Implications of Taliban takeover for the United States

America has reached the peak of its loss of power and authority, a decline that started on Sep. 11, 2001, and that has culminated in the Taliban's recent takeover of Afghanistan. After this process, it is now a question of how the balance of power in the world will shift

The Taliban’s control of Afghanistan and the overthrow of the Ashraf Ghani government in less than two weeks took many by surprise. Even though the withdrawal of the United States was projected by the agreement signed between the U.S. and the Taliban in February 2020, the swift fall of the whole country into the hands of the Taliban was not expected. While the Trump administration had agreed to withdraw its troops from the country by the end of April 2021, the Biden government decided to push back the withdrawal date to August 31. The U.S. extended the withdrawal date in order to secure a smooth transition period. 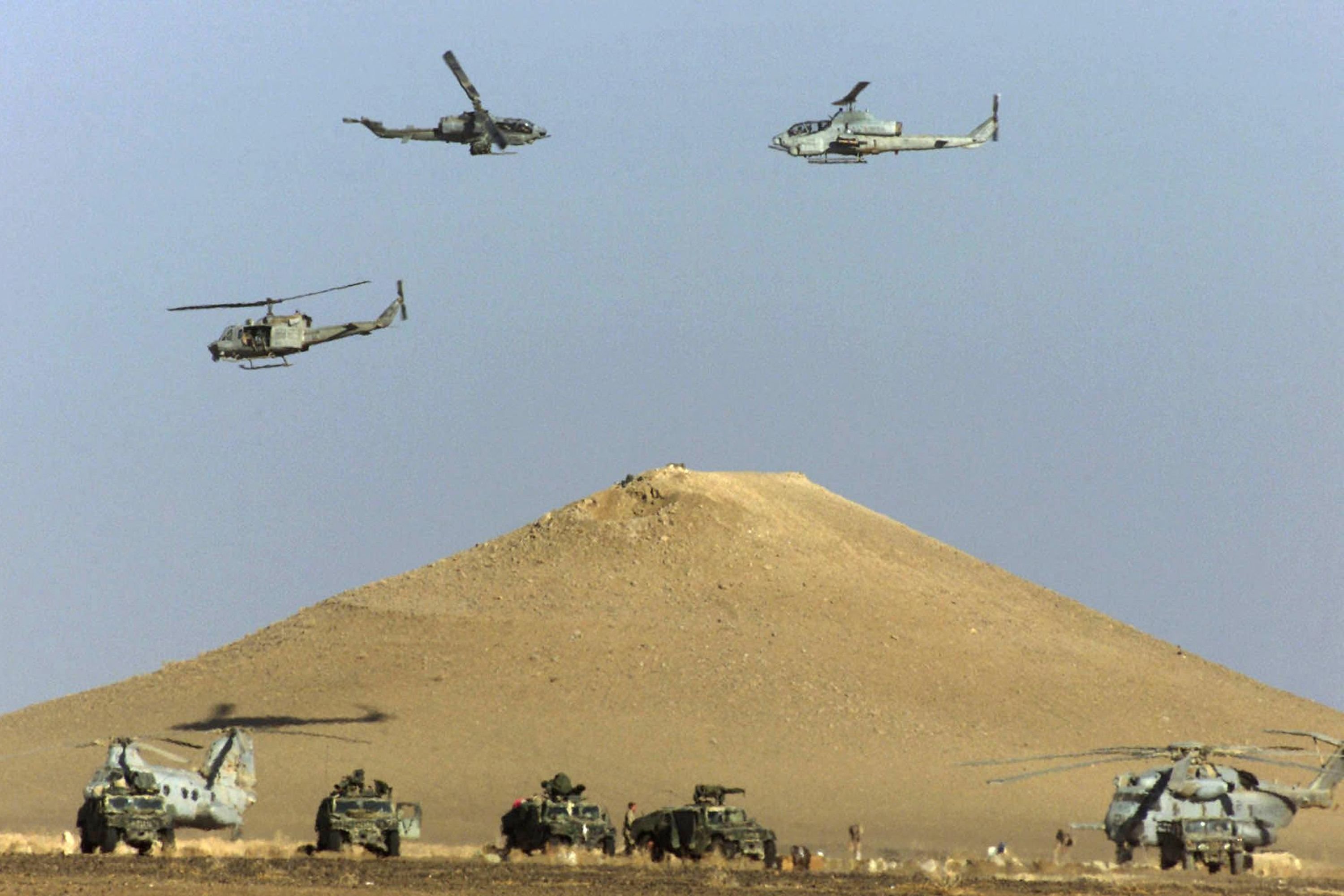 U.S. Marine Cobra attack helicopters circling above larger CH-53 helicopters at the U.S. Marines operations base in southern Afghanistan before heading out north on a mission, Dec. 4, 2001. (AFP Photo)

What happened after 20 years?

The U.S. was trying to consolidate the Afghan government’s firm position and its control over the country during the transition period. The U.S. and its allies had expected an intra-Afghan negotiation process between the Afghan government and the Taliban to begin. However, it never happened. Then, when the Taliban began to move and extend control over some provinces, they realized that there was no resistance against their forces. The more they expanded their control, the quicker the Afghan army abandoned their weapons and surrendered.

The U.S. withdrawal from Afghanistan and the return of the Taliban to power is clearly a strategic failure, a loss of credibility, a negative change in the balance of power in the sub-continent for the U.S. We know that it invaded Afghanistan to overthrow the Taliban regime 20 years ago; however, after the loss of thousands of lives of American soldiers and spending billions of dollars, it has left the country to a stronger Taliban without reaching most of its objectives.

When we consider the main implications of the new Taliban rule in Afghanistan on international politics, the first actor that comes to our mind is the U.S., the most effective external actor in the country. The U.S. is a strategic loser in Afghanistan. When we look at U.S. policy in previous crises, we see that the most recent developments in Afghanistan are just another circle showing the damaging global American hegemony.

The “unexpected” development is a direct result of the weakening American hegemony and its global power. In other words, the return of the Taliban to power in Afghanistan is not the result of miscalculations or mistakes made by U.S. institutions; rather, it is the result of the loss of U.S. power and effectiveness in designing the world system or even in solving regional crises. The U.S. policymakers have to understand that all developments are not under their control anymore.

Compared with the Cold War period and the first decade of the post-Cold War period, the U.S. has lost its supremacy in global politics over the past two decades. Starting from the Sep. 11 terrorist attacks, the U.S. lost its constructive power. That is, it is unable to restore order on a global scale or even in regional crises.

However, until very recently the U.S. was able to use its destructive and destabilizing power to deter all global and regional countries. The U.S. had been able to bring instability to most states. Latin America, which is known as the backyard of the U.S., is the clearest example. Latin American countries have been suffering from the destructive power of the U.S. for decades. Any state in Latin America that did not follow a policy in line with that of the U.S. faced various kinds of punishments.

The use or the threat of use of this destructive power is not only limited to Latin American countries. Most European countries began to worry about the unilateral policies of the U.S. during the Trump administration. Interestingly, the Biden administration has also continued to make unilateral decisions regarding Afghanistan.

Biden did not engage in consultations with his European allies during the decision-making process related to the withdrawal. Furthermore, many NATO members fear that they will be put on the table during the negotiations or will witness an increase in tensions with Russia. While the U.S. tries to make a deal with Russia, it mainly ignores the security and economic concerns of its European allies. Therefore, many large European countries have been trying to pursue more Europe-centered (or EU-centered) foreign policies.

Similarly, the U.S. has otherized Turkey for the last decade. The U.S. withdrew Patriot air defense missiles from Turkish territory and transferred them to Eastern European countries, sided with the countries that try to encircle Turkey in the Eastern Mediterranean region, imposed sanctions on Turkey due to some Turkish foreign policy steps taken towards Iran and Russia and supported (and still supports) the Syrian branch of PKK, which has been declared a terrorist organization by the U.S. government.

It seems that the Taliban takeover in Afghanistan has demonstrated that the U.S. has lost not only its constructive power but its destructive and destabilizing power, too. The question is not whether the U.S. loses control over the developments or not.

Instead, from now on, one has to ask the question of whether China and Russia will begin to take initiatives in resolving international crises and take responsibility to sustain the world system.

Pro-Taliban states such as China and Pakistan encourage the Taliban to take international concerns into consideration regarding women’s rights and the inclusiveness of the government. Therefore, it seems that the new Taliban rule will not challenge the U.S.-led global order.

Most probably, China and Russia will recognize the Taliban rule soon, and together with Iran and Pakistan, they will take responsibility in providing for the political stability and economic well-being of Afghanistan.

Furthermore, some Western countries may also join China and Russia in recognizing the Taliban reality. In other words, some global and regional countries may come together and take initiatives in solving the Afghanistan crisis and thus contribute to the consolidation of the global system. At the very least, the improvement of the situation on the ground will also contribute to the erosion of American global hegemony.

It should not be forgotten that a power vacuum is not preferred in Afghanistan. Therefore, many global and regional countries will prefer to contribute to political stability in the country in order to mitigate any negative consequences of the crisis.

For instance, European countries, which do not want a new wave of Afghan refugees coming to Europe, may recognize the Taliban rule in Afghanistan. That is, the policies of European countries may also deviate from U.S. policy.

The Middle East's future with the Taliban
Previous

What will Raisi's term bring to Iran-EU relations?
Next
Loading...
Loading...
We use cookies to ensure that we give you the best experience on our website. If you continue to use this site we will assume that you are happy with it.Ok