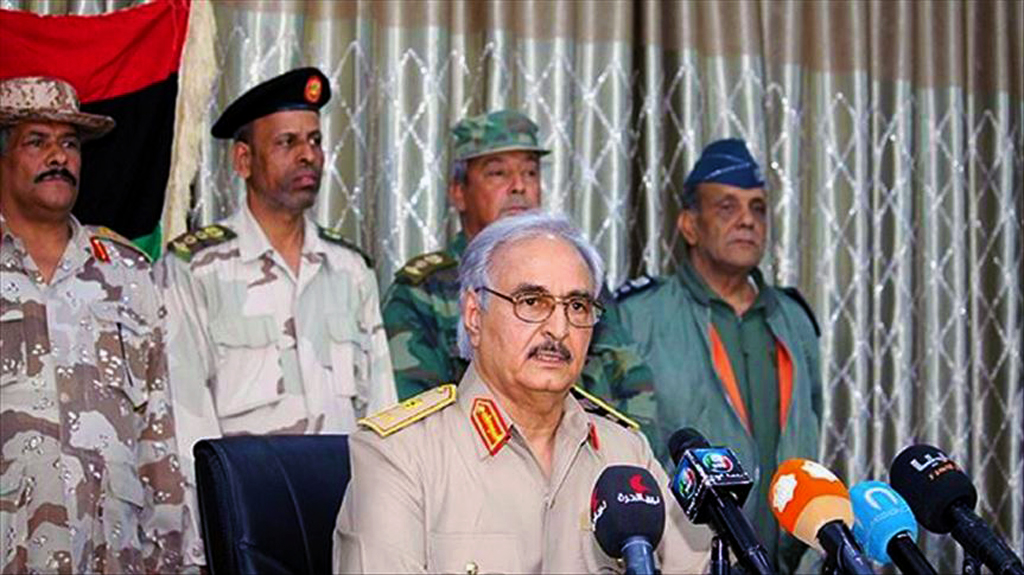 Haftar is Russia’s stone to kill many birds

Renegade general Khalifa Haftar, who claims to be the commander of a militia called the Libyan National Army (LNA), is attacking the Libyan capital of Tripoli in a renewed attempt to take down the U.N.-recognized Government of National Accord (GNA).

Renegade general Khalifa Haftar, who claims to be the commander of a militia called the Libyan National Army (LNA), is attacking the Libyan capital of Tripoli in a renewed attempt to take down the U.N.-recognized Government of National Accord (GNA). This attack is not the first one but rather a rejuvenated version of the failed attempt by Haftar in April 2019. Although it is not the first, it is different in nature. This time, it is supported by Russia wholeheartedly, unlike the previous campaign.

There are a number of reasons why Russia would back such an unlawful assault on the legitimate government in Libya, but one reason is especially relevant here: Russia is not happy with the latest memoranda of understanding between Turkey and the GNA, and the former is aiming to roll back this gain particularly on the part of Turkey. Naturally, if Tripoli falls to Haftar’s invasion, the GNA would collapse and the memoranda of understanding reached by President Recep Tayyip Erdoğan and Libyan Prime Minister Fayez al-Sarraj on Nov. 27 would be annulled. This is what Russia is aspiring for, and it has good reason. First, Russia is happy with the stalemate in the Eastern Mediterranean between Turkey and the Turkish Republic of Northern Cyprus (TRNC) on one side and Israel, Egypt, Greece and the Greek Cypriot Administration of Southern Cyprus (GCASC) on the other. As long as the stalemate persists between the two camps, the prospect of the transfer of hydrocarbon resources from the Mediterranean to Europe via pipelines, either through or bypassing Turkey, would remain a low probability. This is exactly what Russia is trying to achieve – depriving Europe of the hydrocarbon resources of the Mediterranean to maintain the latter’s energy dependence on the former. The latest memoranda of understanding between Turkey and Libya shifts the balance of power in the Mediterranean in favor of Turkey. Russia aims to reverse the move and return to the previous status quo by breaking one of the pillars of the memoranda, the GNA, through Haftar’s attack on Tripoli.

Russia is aware the U.S. is not a prominent player in Libya; regional powers such as the United Arab Emirates (UAE) and Egypt are much more influential. Therefore, Russia sees a window of opportunity to become the most influential player in Libya by helping Haftar capture Tripoli and control most of the country. In this way, Russia aims to hold all the cards as it does in Syria, which would provide leverage for Russia vis-a-vis the West on many issues.

Furthermore, stepping into the Libyan crisis is cheaper than involvement in the Syrian civil war since Haftar is already enjoying support from Saudi Arabia, the UAE, Egypt, Israel and more implicitly, France. This would make it much easier for Russia to have “a Libyan version of the Assad regime,” but this time without wide-scale international backlash and embargos. By taking over the main sponsorship of Haftar from the regional or less influential actors mentioned above, Russia is set to gain the most in a sort of “free-rider” fashion. Although Iran has been a staunch supporter of the Assad regime in Syria, it has been side-lined to a great extent by Russia since the latter’s entry into the country in late 2015. This would be replicated in Libya as well since Russia would dominate all other actors when it comes to competition for power over the strongman.

The prospect of having a Libyan version of the Assad regime would entail many advantages to be exploited by Russia, ranging from tapping into the oil riches to setting up military bases on the Mediterranean coast similar to the ones in Syria. The prospect of setting up military bases in Libya is a temptation that Russia could not resist since it would give the latter the chance to close in on NATO from the south by becoming a neighbor of Italy and Greece. Russia has already changed the geopolitical dynamics in the Eastern Mediterranean thanks to its naval base in Syria’s Tartous and the one in Syria’s Latakia, where S-400 systems are deployed creating a Russian A2/AD bubble. Taking into account the level of importance attached to the bases in Syria by Russia – some could even argue that Russia’s involvement in the Syrian crisis was all about preserving its bases – it will not miss the chance to proliferate its bases in the Mediterranean when the odds are in its favor.

The latest memoranda of understanding between Turkey and Libya grants greater marine space to the former to tap into the hydrocarbon resources in the Mediterranean. This prospect also disturbs Russia since it does not want to lose Turkey as a loyal customer of a huge amount of Russian oil and gas. This would decrease Turkey’s energy dependence on Russia to a great extent and to the extent that Turkey rids itself of its dependence on Russian oil and gas, making it much more autonomous in its foreign policy.

Russia and Turkey have a lot to negotiate in Syria. Haftar’s prospective success in invading Tripoli and taking down the GNA would give Russia a huge bargaining chip and tool to pressure Turkey over Syria. Turkey’s prospective military support of the GNA, either in the form of weaponry, hardware or military advisors or in the form of deployment of Turkish troops in Tripoli, would strip Russia of all of the interests explained above. Therefore, it is in Russia’s best interest to deter Turkey from deploying its troops in Tripoli or sending other military support to the GNA. In other words, Russian President Vladimir Putin will try hard to convince Erdoğan not to send military support to the GNA in their upcoming meeting.

Demand for change in Arab world continues
Next
Loading...
Loading...
We use cookies to ensure that we give you the best experience on our website. If you continue to use this site we will assume that you are happy with it.Ok