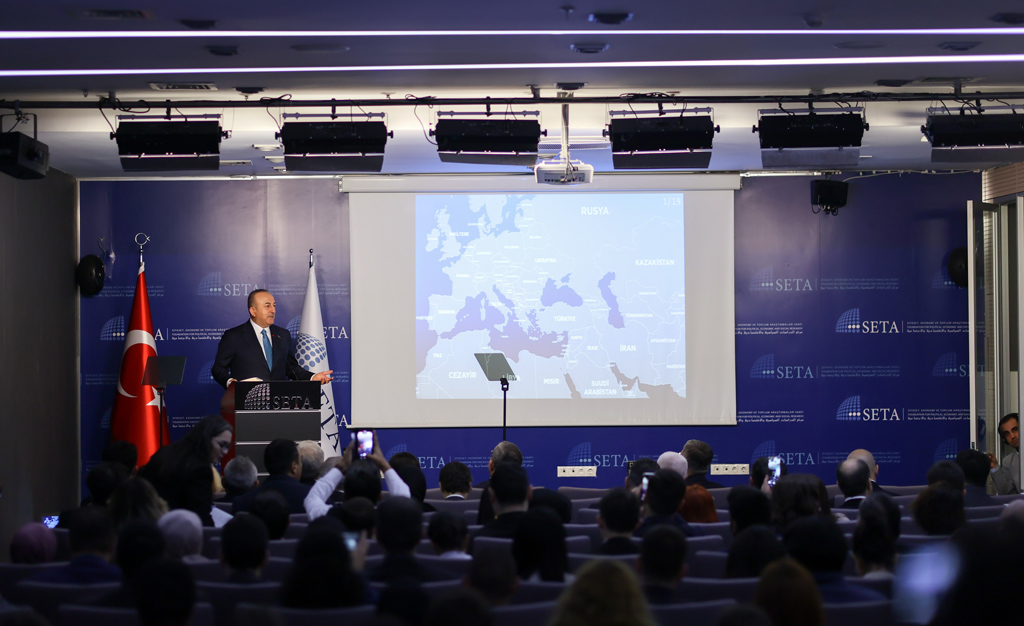 Türkiye on Wednesday slammed Greece over its “insincere” and “dishonest” position on the Aegean Sea and eastern Mediterranean issues.

Speaking at an event by the Political, Economic and Social Research Foundation (SETA), a think tank based in the Turkish capital Ankara, Foreign Minister Mevlut Cavusoglu said Athens blocks the pathway to justice on existing issues.

Commenting on the current status of relations, Cavusoglu said that Greece is “very uneasy” about Türkiye’s growing regional influence.

“But a smart neighbor would be pleased with that and would use it for its own advantage,” he said.

The Turkish minister also cited the rise in the “anti-Türkiye lobby” in Greece and “lack of strategic vision of Greece” as the reason for the current frost in ties.

Cavusoglu criticized Greece for being a “safe haven for many terrorist organizations like the PKK and FETO,” and said Athens did not respond to Ankara’s call to establish a joint center for fighting terrorism.

He further said Greece violates the rights of the Turkish minority in Western Thrace and it perceives the Aegean as a “Greek Sea” only while disregarding Türkiye’s rights and interests.

“At least 16 of 23 islands in the Aegean Sea, which should have been demilitarized according to agreements, are armed by Greece,” he added.

The top Turkish diplomat criticized the approach of Europe and the US on the Türkiye-Greece relations, accusing Europe of double standards.

Expressing Ankara’s readiness to resolve disputes if Greece wants to, Cavusoglu said it is not possible due to Athens disregarding the exploratory talks.

“Greece is blocking the pathway for international law and jurisprudence to resolve problems,” he said, adding that it tries to “impose their maximalist understanding” on Türkiye.

Cyprus has been mired in a decades-long dispute between Greek Cypriots and Turkish Cypriots, despite a series of diplomatic efforts by the UN to achieve a comprehensive settlement.

Ethnic attacks starting in the early 1960s forced Turkish Cypriots to withdraw into enclaves for their safety.

In 1974, a Greek Cypriot coup aimed at Greece’s annexation led to Türkiye’s military intervention as a guarantor power to protect Turkish Cypriots from persecution and violence. As a result, the Turkish Republic of Northern Cyprus (TRNC) was founded in 1983.

It has seen an on-and-off peace process in recent years, including a failed 2017 initiative in Switzerland under the auspices of guarantor countries Türkiye, Greece and the UK.

The Greek Cypriot administration joined the EU in 2004, the same year Greek Cypriots thwarted the UN’s Annan plan to end the longstanding dispute.

“We will continue to carry out our drilling activities, we will protect our rights and the rights of the TRNC,” Cavusoglu said.

Asked about claims of Greece preparing an attack on Türkiye, he said it would mean Athens has “lost its senses.”

Athens, he said, knows very well what it means to oppose Ankara. Cavusoglu called on Greece to “not look at who is behind you, but rather look at who you are facing.”

Türkiye, a NATO member for over 70 years, has complained of repeated provocative actions and rhetoric by Greece in the region in recent months, including arming islands near Turkish shores that are demilitarized under treaty obligations, saying such moves frustrate its good faith efforts towards peace.

Answering a question about Egypt’s announcing halt in normalization of ties with Türkiye, Cavusoglu said there are other countries with which Ankara is carrying out talks for normalization, but the process with Egypt is moving more slowly.

“We are not the reason for this,” the Turkish foreign minister said, affirming that the latest hydrocarbon deal with Libya is not against Egypt.

“If Egypt signs an agreement with us, it will gain much more maritime jurisdiction than the agreement it made with Greece. We are talking about 40,000 square kilometers (15,400 square miles),” he said.

AK Party: Secret to 20 years in power, tips for the next phase
Next
Loading...
Loading...
We use cookies to ensure that we give you the best experience on our website. If you continue to use this site we will assume that you are happy with it.Ok