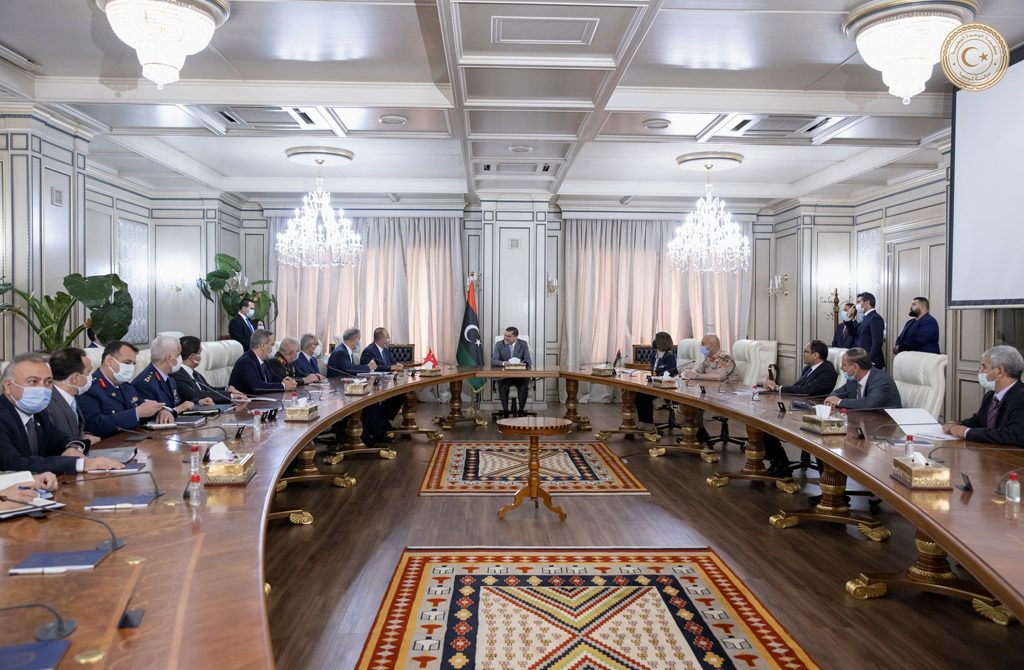 Turkish and Libyan senior officials gather for a meeting in Tripoli, Libya, May 3, 2021. (Reuters Photo)

Future of Turkish soldiers in Libya

Still, it is a challenge for members of the GNA cabinet to visit Benghazi. Putschist Gen. Khalifa Haftar, who attempted to overthrow the legitimate government, may have been reduced to a secondary figure, but he hasn’t given up. He is still on the lookout for fresh opportunities.

As such, high-level visits must continue, actively, until Libya holds a new election and the Libyan people decide who will carry their country forward.

For the Libyan prime minister, who seeks to strike a balance of power between the various foreign governments with vested interests in his country, Ankara’s support is critically important. Let us remember that Haftar, backed by France, Egypt, Russia and the United Arab Emirates (UAE), nearly captured Tripoli just 18 months ago.

A new wave of refugees could have reached the gates of Europe. Turkey and Libya changed the course of the civil war by signing two agreements in November 2019 on maritime delimitation and military cooperation.

The transition process, which pleases many European governments today, was made possible by Turkey’s intervention. Ankara’s involvement made things easier for Germany and Italy, while France was forced to take a step back.

Nowadays, Turkey and Egypt exchange views on their mutual interests in Libya and the Eastern Mediterranean.

Yet a challenging process lies ahead for Libya. A political structure must be created to keep the country’s western, eastern and southern provinces unified. Other items on Tripoli’s agenda include infrastructure projects, improving municipal services and the formation of a standing army.

The removal of Russian, Sudanese and Chadian mercenaries, too, is key to stability. The United Nations and European governments rely on diplomacy to facilitate the withdrawal of foreign fighters and mercenaries, including the Turkish military, Wagner Group and other militias. But who should really leave Libya?

Provided that Libya’s government upholds that agreement, there is no basis to compare the Turkish troops with the Wagner Group or other mercenaries.

Indeed, Çavuşoğlu made that case very clearly in Berlin, stating: “There are many foreign fighters and mercenaries in Libya. We agree that they must leave. It does not serve Libya’s interests, however, to cease much-needed support, such as military training and advice, which is delivered on the basis of a treaty between two sovereign nations. It would be wrong for third parties to meddle in such bilateral agreements.”

Ankara tells others to stop pushing for Turkish troops to leave just so the Wagner Group will withdraw, warning that such pressure could undermine the progress made in Libya.

Why should Turkish troops remain in Libya though? Keeping in mind that the folks in Benghazi still find it difficult to transfer power to the GNA, Turkey’s military should be providing both training and advice to help establish a standing army, rather than leave.

In other words, the Turkish military presence contributes to the Libyan army’s development and keeps Haftar’s influence at bay. It also protects the fragile transition process and prevents Russia from gaining more ground and building new bases.

The fact that Turkey, a NATO ally, voluntarily assumes the role serves the interests of both the European Union and the United States.

Calls for the withdrawal of Turkish troops, designed to curb Turkey’s potential influence over the Libyan election, would certainly undermine peace, security and stability in the country.

Logic and timing of Turkey's normalization with Egypt
Previous

Biden's US pins its hopes on COVID-19 for global image
Next
Loading...
Loading...
We use cookies to ensure that we give you the best experience on our website. If you continue to use this site we will assume that you are happy with it.Ok