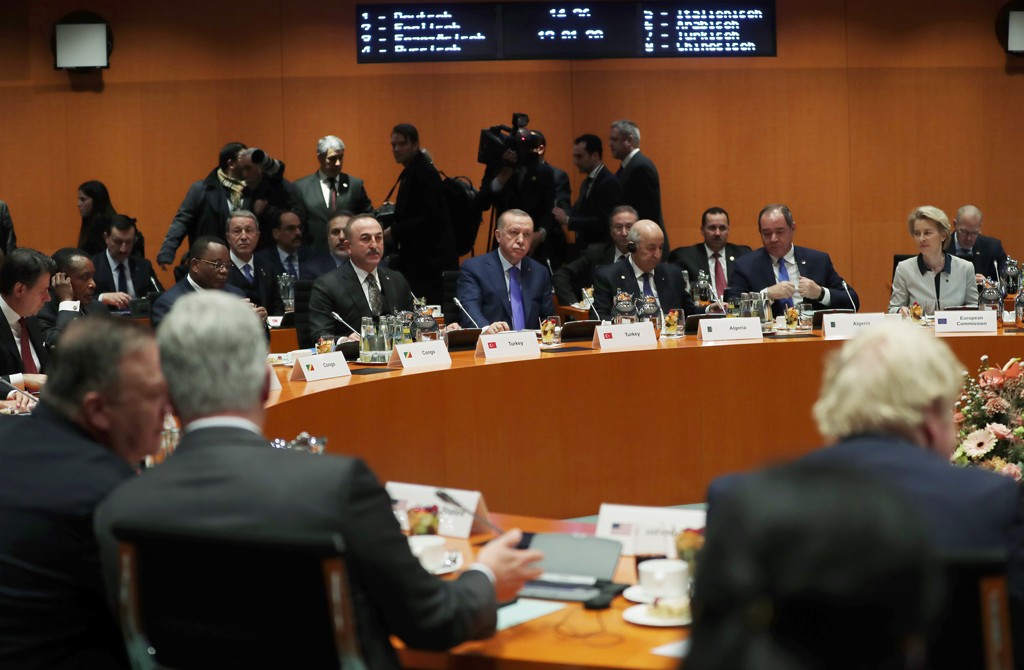 From the Libyan side, both the Prime Minister of the internationally recognized Government of National Accord (GNA) Fayez al-Sarraj and the head of the Libyan National Army (LNA) renegade Gen. Khalifa Haftar were present at Berlin, but they did not officially join the meeting. The outcome of the Berlin conference did not satisfy any of the parties. The meeting instead appeased instigators like Haftar and the UAE. The message of the conference was: “The Libyan crisis should be resolved by diplomatic means.”

Turkey’s involvement on the side of the GNA changed the balance and pushed forward the possibility of a diplomatic process. Turkish military involvement and Turkey’s diplomatic contacts with Russia constrained the expectations of Haftar’s forces to take over the capital Tripoli. This balancing acts allowed for the Berlin conference, but the participants of the conference were not committed to stopping Haftar and his supporters’ destabilizing efforts in Libya.

The cease-fire, arms embargo and the return to the political process among the Libyan actors were the most important highlights of the 55 point conclusions document. It was clear for the analysts of the Libya Conflict that the Berlin conference is stillborn, as it just promised to form a 5+5 Military Committee proposed by the UNSMIL (United Nations Support Mission in Libya). Forming dysfunctional committees that do not have any political power is the most common approach to delay solutions on multilateral platforms.

Once again, the Berlin conference demonstrated that multilateral platforms are dysfunctional in finding quick and practical solutions to complicated international conflicts. The inclusion of all the key stakeholders is crucial in reaching a sustainable agreement. This is an important norm that should be one of the fundamental pillars of the conflict management and conflict resolution processes. If the stakeholders do not have particular moral commitments or shared end goals, inclusion can be tricky and counterproductive. Inclusion may provide opportunities for the instigators and may turn them into more influential actors.

There was no overarching shared logic or values that the participants agreed upon nor was respect a bottom-line criterion at Berlin. While the Berlin conference was going on, Haftar forces were shelling Tripoli. The UAE and Egypt did not stop their arms shipment to Haftar forces and were unable to invest in a viable military solution. The GNA, Prime Minister al-Sarraj and his supporters felt that they were betrayed in the Berlin meeting.

Participants of the Berlin conference failed to force the parties to a permanent cease-fire. They instead requested the cessation of foreign involvement, but for everyone in Berlin, it was clear that the Haftar backers will continue their military support for the LNA. The Turkish side will try to balance the LNA and Haftar’s allies until a credible cease-fire is reached. As it was seen in the failed cease-fire efforts in Moscow, Haftar is incapable of making any significant decision by himself. He had to consult with Cairo, Abu Dhabi and some other Western capitals as well.

Within this circumstance, if a credible cease-fire cannot be reached any time soon, the Berlin conference may turn into another Geneve process like in the case of the Syrian civil war. Some international actors may be content to see an unstable Libya. As long as the oil flows from the key ports, and there is no significant refugee flow to Europe, international actors are ready to accept the continuation of a prolonged civil war in Libya.

Only the Libyans will suffer from such dysfunctional diplomatic efforts. Turkey’s involvement and military support for GNA-controlled forces, rather than the U.N. or the EU, are the only hopes of many Libyans in GNA-controlled areas. Only a credible cease-fire that is strictly monitored by a U.N.-recognized body can allow for genuine diplomatic contact between Libyan actors and other key international stakeholders. As the cease-fire gets delayed, the hope for a diplomatic solution to the Libyan crisis diminishes.

CHP bogged down in FETÖ mud
Next
Loading...
Loading...
We use cookies to ensure that we give you the best experience on our website. If you continue to use this site we will assume that you are happy with it.Ok