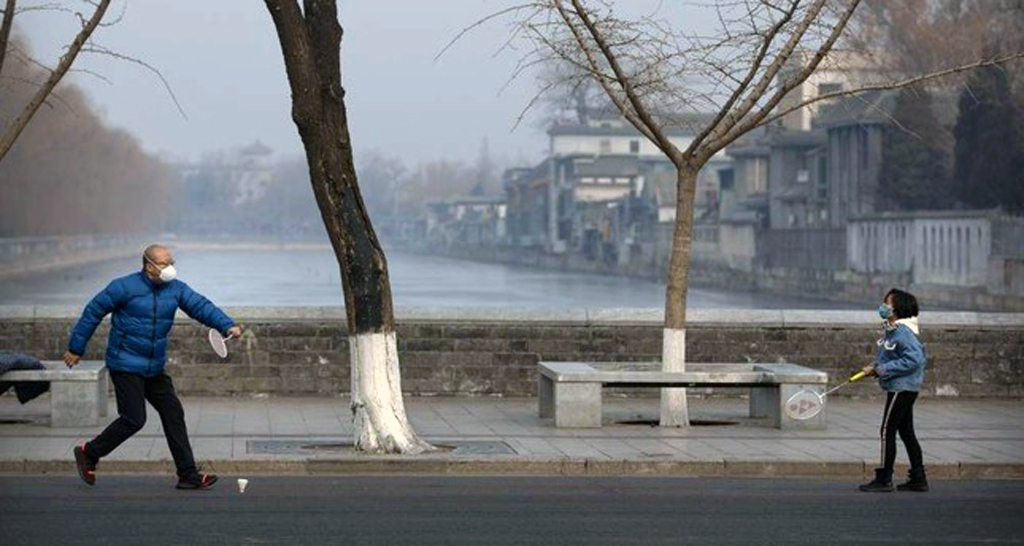 A man and girl wear face masks as they play badminton near the closed Forbidden City in Beijing, Jan. 27, 2020. (AP Photo)

Coronavirus: A reminder to prepare for next outbreak

In 2003, the SARS virus was one of the first wake-up calls for the pro-globalization crowd in regard to the potential impacts of the erosion of borders vis-a-vis the spread of diseases. Although pandemics were nothing new for the world, the rapid spread of the SARS virus generated concerns about the future.

In 2003, the SARS virus was one of the first wake-up calls for the pro-globalization crowd in regard to the potential impacts of the erosion of borders vis-a-vis the spread of diseases. Although pandemics were nothing new for the world, the rapid spread of the SARS virus generated concerns about the future.

The rapid transformation of the world and developments in transportation facilitated the transfer not only of ideas, goods and services, but also viruses and bacteria from one country to another. In line with the quickening speed of the spread of disease, we similarly saw an increased amount of panic.

Global governance in response to epidemics has become a more central issue for many around the world. The belief that national governments may not be sufficiently equipped to handle such crises and the thought that there will always be a possibility of countries hiding casualty figures and data from the outside world for various reasons has increased the amount of attention given to global organizations’ handling of epidemics.

Since the SARS outbreak, in every epidemic that has hit various parts of the world, whether Ebola, Zika or swine flu, the international community has suffered a collective form of deja vu. There are today an increasing number of books about past pandemics, documentaries on the epidemics that killed millions and even movies focusing on post-apocalyptic pandemics that wipe out thousands of people and threaten millions around the world.

Across the world, many seem to be more knowledgeable, or at least informed, about these pandemics and epidemics and try to pay attention to the media about the potential harm these epidemics may bring to their societies.

However, in each and every pandemic there seems to occur similar mistakes or deficiencies for all to witness. In each and every instance, these are registered as lessons, but after the successful containment of the virus, many just ignore those lessons and go about life as normal until the arrival of the next.

The new epidemic that has emerged in Wuhan raises similar questions about the potential lessons we take from these forms of illness. Unlike many other epidemics, there was certainly a speedier discovery of the exact epicenter of this virus; however, following this, we began to see the re-emergence of similar challenges. The foremost of these pertain to the mutation of these viruses and differences in the way they have spread in different parts of the world, sometimes rendering the old lessons somewhat obsolete.

For instance, in the last instance of a coronavirus outbreak, Chinese authorities informed the world that the disease could spread even in the incubation period – i.e. that even before the symptoms appear, the virus can be transmitted to others. This poses a totally new challenge for those trying to stop the spread of the virus.

Most of the border checkpoints and airport screening for the spread of disease depends on fever scanners. The fact that a person can spread it even before he or she shows the symptoms, however, constitutes a new risk.

Secondly, there is an increasing need for more information in regards to the nature of outbreaks of contagious diseases. Governments around the world can be extremely private when it comes to contiguous diseases coming from their countries.

For economic, social and in some instances, political reasons, it has become mostly a common practice for nations to hide information about these instances. However, this privacy and self-dependence generate a more significant threat in regard to the spread of these illnesses.

Thirdly, coronavirus has once more demonstrated the need for an international effort to stop the spread of these viruses and a collective effort to find a cure or a vaccine to combat them. In addition to the World Health Organization and other relevant bodies, there is a need for regional efforts to contain the epidemics and improve coordination between neighboring countries.

Over the last two decades, every epidemic has demonstrated the necessity for a region-wide effort to shore up containment efforts. However, after the end of an epidemic, this idea disappears and lessons would be totally forgotten.

In the next few weeks, the risks posed by coronavirus will become more clear. We will see if it spreads further and affects the lives of yet more people around the world. However, while monitoring the risks, we also have to figure out how we should deal with the next outbreak ahead.

Analysis: Dangerous “Local Partner” The YPG’s Terror Campaign in Northern Syria
Next
Loading...
Loading...
We use cookies to ensure that we give you the best experience on our website. If you continue to use this site we will assume that you are happy with it.Ok