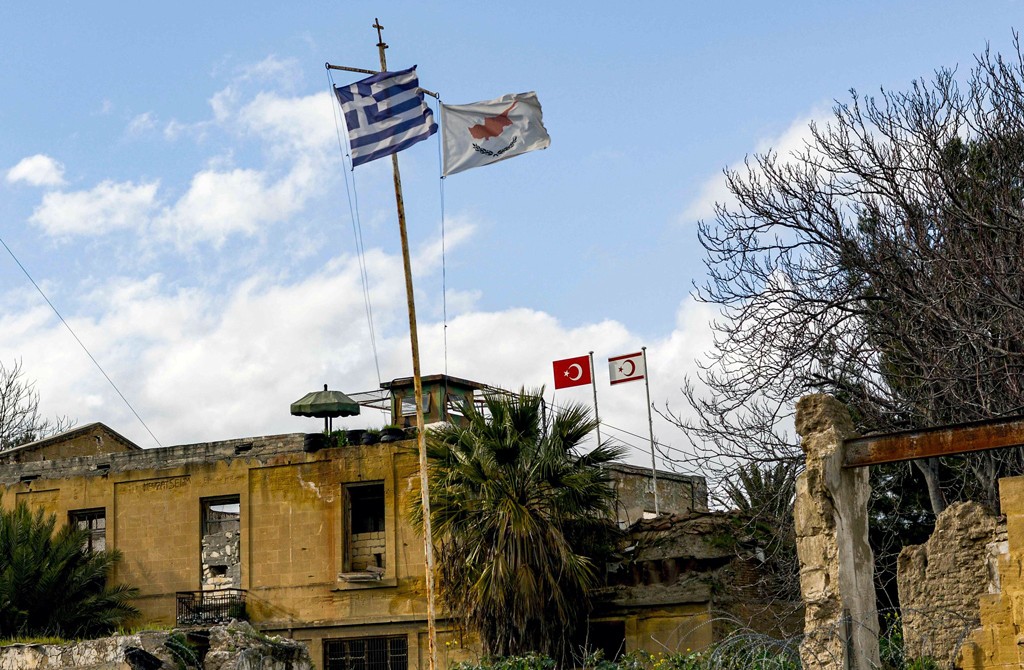 A view of (L to R, foreground) the flags of Greece, the Greek Cypriot administration, (L to R, background) Turkey, and the Turkish Republic of Northern Cyprus (TRNC) flying on respective security outposts lying off both sides of the United Nations Buffer Zone in the old walled city of the divided capital Nicosia, Feb. 7, 2020. (AFP Photo)

Compromise or not: Ankara-Greece tension continues

For the last month, there have been increasing reports about the rising tension in the Eastern Mediterranean between Turkey and Greece. Although tension in the Aegean Sea is not uncommon due to several disputes in regards to maritime delimitation, this time there are broader issues. There is confusion among the international observers about the nature of this tension and it could be appropriate to note a few points on what led to it.

For the last month, there have been increasing reports about the rising tension in the Eastern Mediterranean between Turkey and Greece. Although tension in the Aegean Sea is not uncommon due to several disputes in regards to maritime delimitation, this time there are broader issues. There is confusion among the international observers about the nature of this tension and it could be appropriate to note a few points on what led to it.

First of all, it is important to remember that Turkey has a rather long coastline in the Mediterranean Sea. For the last several years, there have been several attempts by some regional countries to exclude Turkey, despite its long coastline, from energy exploration in the area.

These countries tried to form a pact and even came up with plans on how to carry natural gas from the region to Europe which according to many observers is not even feasible. Amid this tension over the energy resources, a map started circulating among some in Europe agencies which shows only a limited area for Turkey as an exclusive economic zone (EEZ).

The map recognizes all of Greece’s maximalist demands, including granting an EEZ to one of its tiny islands just 2 kilometers away from Turkey’s shore. It limits Turkey to a tiny stretch of area in the Mediterranean Sea. Naturally, Turkey would not except this agreement and in the meantime, it signed a maritime boundary deal with Libya. Turkey informed the international community about this agreement and launched its research activities per this treaty.

In reply, Greece, with the support of France, escalated tension, sabotaged the potential talks with Ankara, and signed a separate deal with Egypt. The timing of this deal and statement from Athens demonstrated that the Greek side was not willing to diplomatically resolve this problem. In fact, after the failure of this initial attempt, the NATO secretary-general announced yesterday that the two sides have agreed to start talks on the issue.

Secretary-General Jens Stoltenberg tweeted: “Following my discussions with Greek and Turkish leaders, the two Allies have agreed to enter into technical talks at NATO to establish deconfliction mechanisms and reduce the risk of incidents and accidents in the EastMed.”

However, Athens soon after declared that the announcement “does not correspond with reality.”

An official in Athens denied reaching a deal with Turkey in technical matters and signaled that there would be no talks unless Turkey withdraws from the region. It is rather strange that the Greek side rejects any form of negotiations from Germany, who is holding the presidency of the Council of the European Union and Stoltenberg.

In addition to rejecting these offers to resolve the problem through dialogue, the Greek side is also taking steps to escalate tension in the region. Rather provocatively, Athens has signaled a potential attempt to extend its territorial waters to 12 miles in the Aegean Sea. It also increased military activity in the islands that are supposed to be demilitarized. All of these provocations would generate a serious backlash from Turkey, and Athens knows it well.

In previous instances, Turkey did not allow such attempts and, in fact, declared they could be a reason to declare war. Then what is Greece willing to achieve by increasing tension in the region? Does Athens think Turkey would take a step back following these attempts by Greece? If so, it is a big miscalculation on Athens’ part at this point. This miscalculation may generate a more serious problem for Athens if, with the encouragement and support of some external actors, it further escalates the tension.

Ankara signaled the potential consequences of such a move by Greece and urged Athens on multiple occasions to resolve this problem through diplomacy. Considering the sensitivity of the subject for the Turkish public and the government it would be wise for Athens to stop looking for sponsors for its belligerence toward Turkey.

The two nations, the two countries will remain in the region for a long time and it only makes sense to develop a better bilateral rapport. The rhetoric in Athens would not bring any good for Greece and its exploitation by opportunistic politicians would pave the way for a disaster in the region.

Macron's irrational actions and EU's indifference
Next
Loading...
Loading...
We use cookies to ensure that we give you the best experience on our website. If you continue to use this site we will assume that you are happy with it.Ok