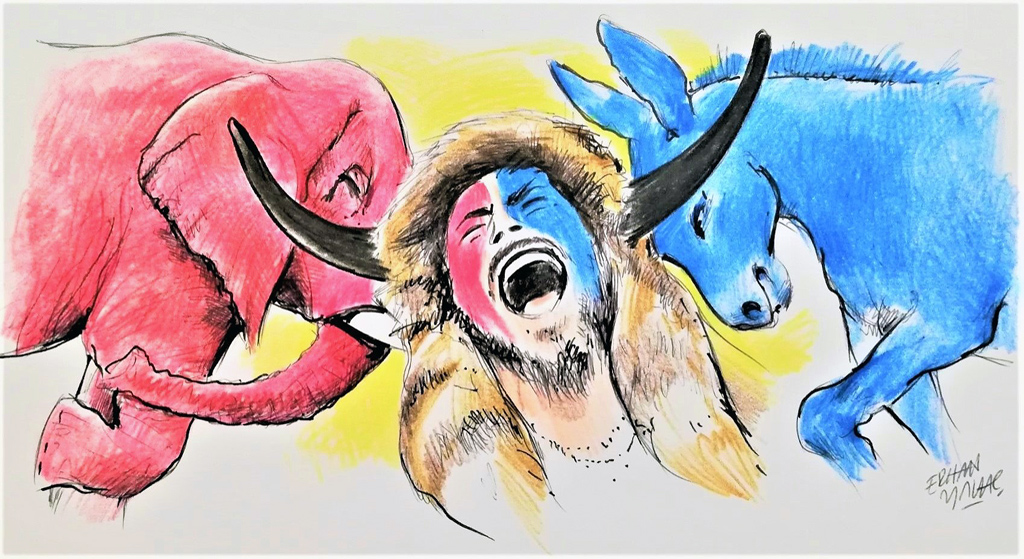 The United States is going through a particularly interesting period. The two-month presidential transition allowed for a flare-up of tensions unseen in two centuries.

The United States is going through a particularly interesting period. The two-month presidential transition allowed for a flare-up of tensions unseen in two centuries.

Insisting that the election was stolen, President Donald Trump urged his supporters to secure America’s future. In his final move, he called for a protest on the day that the Electoral College vote would be certified by U.S. Congress, instructing Vice President Mike Pence to take initiative and send the votes back to their states.

On Jan. 6, the certification process was met by massive protests that turned into an “insurrection.” Washington, whose streets were filled with Black Lives Matter (BLM) protestors over the summer, was taken hostage by a mob of white, angry Trump supporters. The shocking images coming from the U.S. Capitol building led observers to question whether America had become a third-world country. What happened in Washington attested to the weakness of American democracy and the very real challenges of a peaceful transfer of power.

To be clear, this was no ordinary protest. What Joe Biden, the incoming president, described as an “insurrection” has been covered by the U.S. media as a “coup attempt” by “domestic terrorists” and “Trump’s barbarians.”

It goes without saying that Trump will pay the price for last week’s riots. The Trump presidency, characterized by four years of controversial appointments, mass dismissals and outlandish statements, is going out with a bang. Many American journalists accuse the outgoing president of inciting violence and demand that he be put on trial and impeached. The judiciary is expected to take action to prevent anything like this from happening in the future. Trump’s critics argue that he has left no principle of democratic governance unviolated.

In truth, democracy in the U.S. is in the second stage of a crisis threatening its legitimacy. Back in 2016, before the serious allegations of fraud, Trump’s opinions, personality and populist platform triggered a serious crisis of legitimacy among Democrats. The establishment had to fight very hard to keep the White House in line, with America’s public institutions, including Congress, resisting the Trump presidency.

In the end, Trump failed to clinch reelection, which can partly be blamed on the COVID-19 pandemic. But how Trump, the man accused of inciting the attack on Capitol Hill, and certain other Republicans will be treated will put America’s democracy to the test once more.

Trump’s political career may be over and he could even end up behind bars but the Republic mob, which took over the Capitol, continues to believe that the 2020 election was stolen. Trump’s most ardent supporters refuse to accept Biden as the legitimate president. The Republicans, whom Trump criticized for failing to act, are divided and it will not be easy for Democrats to bridge the gap.

The United States, with its history of (mostly futile) efforts to promote democracy, cannot seem to cope with the challenges facing its own democracy today. Washington is dealing with the weakness of its own democracy – rather than exporting it. A superpower does not get to blame its problems on meddling foreign powers. In fact, Trump personally called on his supporters to flock outside the Capitol.

Will America’s domestic problems undermine the Biden administration’s plan to form an alliance of democracies? Can the U.S., where white rage won’t subside and a Confederate flag was hoisted inside its Congress, sell the world on democratic principles? How will the Democrats, which regained control of the Senate following the runoff election in Georgia, treat Trump and his supporters across the aisle? The coming weeks will provide the answers to these questions and shed light on Trump’s next move.

In light of what happened in the United States, it is important to remember the July 15, 2016, coup attempt by the Gülenist Terror Group (FETÖ) in Turkey. Obviously, violent protests are categorically unacceptable and all must respect election results. What was worth noting, however, was how quickly the Democrats latched on to the narrative that the riots were an act of terrorism and coup attempt. We witnessed the escalation of fear and panic in the face of the brief crisis, in which the levels of violence were incomparable to that of the attacks perpetrated during the Gezi Park protests in Turkey.

Let us hope that the Capitol storming reminded Washington that democracies have a right to protect themselves, and also how irresponsibly it responded to the attempted coup in Turkey. If you are against armed fanatics forcibly entering the Capitol, then here’s a piece of trivia: the ringleader of the criminal group that bombed Turkey’s Parliament from the air continues to live his life as a free man in rural Pennsylvania.

Capitol protests: The state of the union
Previous

Normalization in the Gulf and Turkey’s agenda
Next
Loading...
Loading...
We use cookies to ensure that we give you the best experience on our website. If you continue to use this site we will assume that you are happy with it.Ok