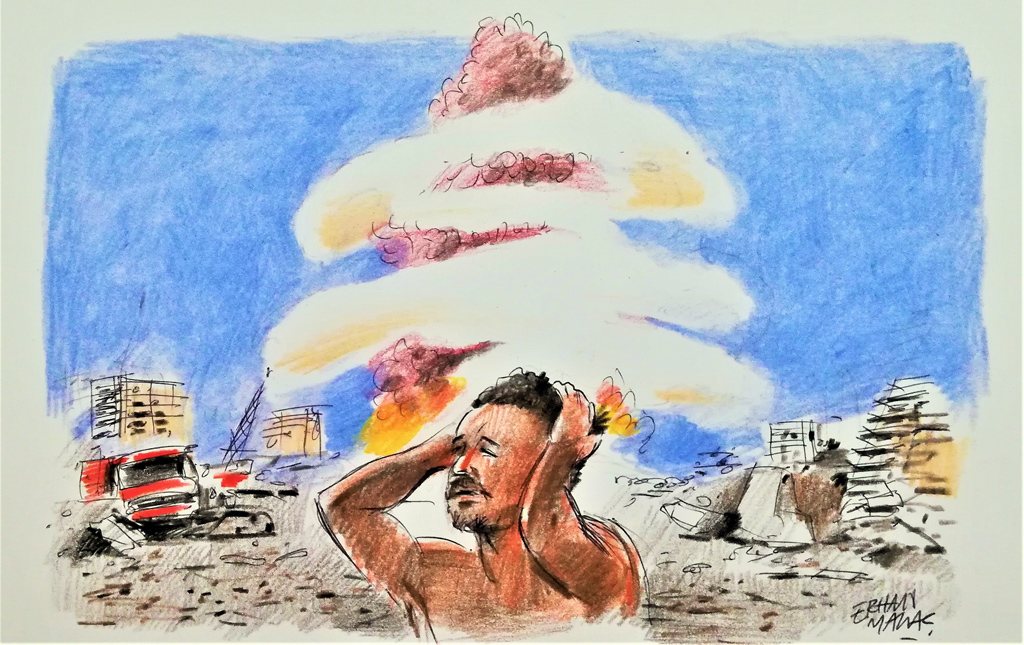 Beirut blast and the fate of the Middle East

All eyes turned to Lebanon after Tuesday’s horrible explosion in Beirut. According to the Lebanese health minister, at least 154 people died in the accident and over 5,000 others survived with injuries. An estimated 200,000 to 300,000 citizens have been left homeless. Lebanon, where protests broke out in October over economic hardships, suffered a financial loss of between $10 billion and $15 billion from the explosion.

All eyes turned to Lebanon after Tuesday’s horrible explosion in Beirut. According to the Lebanese health minister, at least 154 people died in the accident and over 5,000 others survived with injuries. An estimated 200,000 to 300,000 citizens have been left homeless. Lebanon, where protests broke out in October over economic hardships, suffered a financial loss of between $10 billion and $15 billion from the explosion.

Although an act of sabotage has not conclusively been ruled out, the story of how Lebanon neglected to store 2,750 tons of ammonium nitrate properly speaks volumes about the shortcomings of the country’s political system. In retrospect, last week’s disaster, which has been dubbed Lebanon’s Chernobyl, took place under everyone’s noses. The authorities reportedly kept an extraordinary amount of explosives in hangars, ignoring the obvious risk of an explosion. To add insult to injury, Lebanon’s government kept the material at the heart of Beirut despite repeated warnings from its customs officials.

The fallout from last week’s explosion will have a profound impact on Lebanon’s political arena. There is no doubt that the Lebanese people, who had already been shaken by the COVID-19 pandemic and the nation’s economic challenges, will blame their problems on the country’s ruling elite. Whether or not Lebanon’s current government of technocrats will keep their jobs remains a mystery. Yet the real problem is much more serious: The Lebanese state, which was restructured after three decades of violence, cannot function properly. The country’s laws require a Christian to serve as president, a Shiite Muslim to be the speaker of the Parliament and a Sunni Muslim to serve as prime minister.

This unstable structure has always been plagued by crises. The 2005 assassination of Prime Minister Rafik Hariri sent shock waves through the country, and Syrian soldiers withdrew from Lebanon a short time later. In recent years, the country has been grappling with a severe financial crisis and concerns over food security – begging the question of whether those circumstances could trigger a wave of radicalization.

Although Lebanon survived the Arab Spring more easily than other states, its population has been dealing with problems emanating from its neighbors. The Palestinian question, Israel’s aggression and the spillover from the Syrian civil war have kept lots of pressure on Lebanon. As Iran and Saudi Arabia engaged in a fight over regional influence and violence broke out between Hezbollah and Israel, the country’s fragile political system has gradually broken down. Memories of Israel’s 2006 occupation and Prime Minister Saad Hariri’s coerced resignation during his 2017 trip to Saudi Arabia are still fresh. Encountering sectarian polarization and outside interference, Lebanon cannot promote the kind of political unity desperately needed to shoulder its heavy political burden at home and abroad.

The best-case scenario would be that the latest explosion will inspire a new political wave, putting the country’s interests first and avoiding domestic power struggles. The more likely (and unfortunately, worse) scenario will involve foreign powers inciting violence among the Lebanese people. It is highly probable that questions will be asked about Hezbollah’s “state within the state” and the impact of its regional activities, under Iran’s guidance, on Lebanon itself. The spillover of the power struggle between Israel, the Gulf states and Iran will play out on Lebanese soil. That President Emmanuel Macron of France, the former colonial power, rushed to Beirut after the explosion signaled nothing more than his eagerness to be part of the equilibrium in Lebanon.

Last week’s explosion calls for some predictions about the future of the Middle East. The destruction, which dates back to status quo states in the Gulf crushing the Arab Spring, rages on. There are more failed states, more militias, more terrorist organizations, more intelligence operations, more corruption and more out-of-touch regimes in the region today than in the past. From Yemen to Libya, the same story is playing out. Iran’s “axis of resistance,” Israel’s policy of expansion and annexation, and the United Arab Emirates (UAE) and Saudi Arabia’s fear of democracy jointly undermine regional stability. Failed states and civil war thrive wherever those destabilizing factors meet.

The destruction that the Lebanization of the Middle East would entail is embodied by the Beirut explosion. The only country that rejects that process and attempts to stabilize the region is Turkey – which the advocates of regionwide chaos seek to intimidate with the charge of neo-Ottomanism.

Turkey's proactive regional role and UAE's panic
Next
Loading...
Loading...
We use cookies to ensure that we give you the best experience on our website. If you continue to use this site we will assume that you are happy with it.Ok