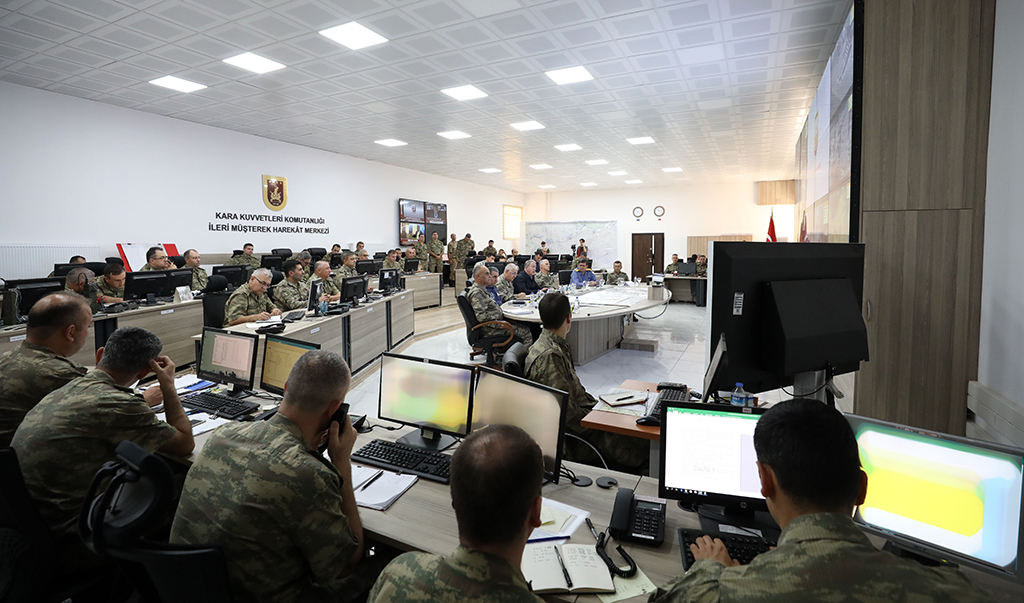 SANLIURFA, TURKEY - OCTOBER 12: Turkish National Defense Minister, Hulusi Akar views the current status on Operation Peace Spring at the Operation Center in Sanliurfa, Turkey on October 12, 2019. Turkish troops along with the Syrian National Army (SNA) began Operation Peace Spring against the PKK/YPG and Daesh terrorists east of the Euphrates River in northern Syria to secure its borders by eliminating terrorist elements and to ensure the safe return of Syrian refugees as well as Syria’s territorial integrity.

With Operation Peace Spring, Turkey steps on many toes

Operation Peace Spring is already underway, and the Turkish military and the Syrian National Army (SNA) are edging towards victory. Some people, who are deeply unhappy with the incursion’s likelihood of success, have already launched a propaganda war against Turkish President Recep Tayyip Erdoğan.

Turkey’s goal, however, is limited to fighting the terrorist PKK and its Syrian affiliate, the People’s Protection Units (YPG), and Daesh in northeastern Syria. By doing so, Ankara wants to facilitate the safe return of Syrian refugees to their lands and promote the peaceful coexistence of Arabs, Turkmens, Kurds and Christians in the area.

If Operation Peace Spring proves to be successful, Turkey will control vast swathes of Syrian territory. In addition to stopping some stakeholders from threatening Turkish interests with the prospect of a PKK-controlled statelet in northeastern Syria, the incursion will further strengthen Ankara’s hand in negotiations on the political transition in Syria.

Operation Peace Spring, which Turkey launched thanks to President Erdoğan’s diplomatic skills, represents an important step towards finding solutions to long-term strategic problems. Liberating this hotbed of terrorism will take Ankara’s influence over Syria, Iraq, the Eastern Mediterranean and the Gulf to the next level. As the last stakeholder to use military force in the Syrian civil war, Turkey enjoys considerable legitimacy. Unlike other countries, it exercises hard power in a way that contributes to a political solution.

If Turkey can complete the incursion’s initial stage without civilian casualties and by successfully managing the Daesh question, U.S. President Donald Trump could agree to work with President Erdoğan in Raqqa and Deir el-Zor, the remaining areas under YPG control.

In other words, Turkey stepped on a lot of toes by launching Operation Peace Spring. Hence condemnations from the United States, the European Union, Israel, Iran and some Arab states.

The U.S. Congress reacted particularly harshly to Turkey’s operation. The Republican Sen. Lindsey Graham, who had publicly acknowledged that Pentagon’s local partner YPG is one and the same as the terrorist PKK, quickly jumped on the “betrayal of Kurds” bandwagon. Not only did Graham challenge Trump’s decision, but he positioned himself as the poster boy for anti-Erdoğanism. We will soon find out how he hopes this U-turn will help his political career.

What Trump wants, on the other hand, is crystal clear. He wants to withdraw from Syria and present it as a victory to the American people. With Turkey volunteering to lead the charge against Daesh, the U.S. president believes he can accomplish his goal.

Compared to Trump, the liberal establishment in Washington, coupled with some Republicans, find themselves in a much worse situation. It is no secret that Donald Trump is not all about “values,” but he, unlike his predecessors, has a coherent and realist approach to world politics. The U.S. president sees Washington’s military involvement in the Middle East, including the 2003 invasion of Iraq, as a mistake. He recently criticized the Obama administration’s support for the designated terrorist group PKK, highlighting his predecessor’s hypocrisy. Trump has no problem revealing the double standards inherent in so-called “liberal values.” The American foreign policy elite likes to mock the U.S. president’s mental faculties, yet the “emperors,” whose new clothes Trump points at, are indeed all naked. Just take a look at Afghanistan and Iraq!

Europe’s reaction to Operation Peace Spring, in turn, merely amounts to a nuisance. Hungary’s refusal to condemn Turkey shows that the EU has no choice but to take Erdoğan’s word since the Turkish leader is the only man with a plan to stop the refugee influx to Europe. Europe has adhered to a policy of military and diplomatic weakness throughout the Syrian conflict. In light of Turkey’s success in northeastern Syria, the Europeans will fall in line and adopt a “realist” position in line with their own interests.

The charge of occupation and ethnic cleansing from Israel, an expansionist power, is just funny. Israeli Prime Minister Benjamin Netanyahu, who has no respect for international law and repeatedly massacred Palestinians, merely wants to keep his government’s pawn in the area – which, he hopes, can be used to divide up three countries.

Meanwhile, Saudi Arabia, which has been bombing civilians in Yemen for years, and Egypt, now under the yoke of its usurper-president Gen. Abdel-Fattah el-Sissi, are worried that they will have no influence left in the diplomatic negotiations for Syria’s future.

Iran’s reaction does not hurt the Astana process, yet the country will benefit from any Turkish failure in northeastern Syria. Russia, too, will monitor the situation, hoping that it can further strengthen Bashar Assad.

Operation Peace Spring will succeed if Turkey, including the government and the opposition, are unified. All reactions and sanctions will fizzle out in the face of a nation’s determination. Together, we can right all wrongs.

Analysis: Uniting the Syrian Opposition | The Components of the National Army and the Implications of the Unification
Previous