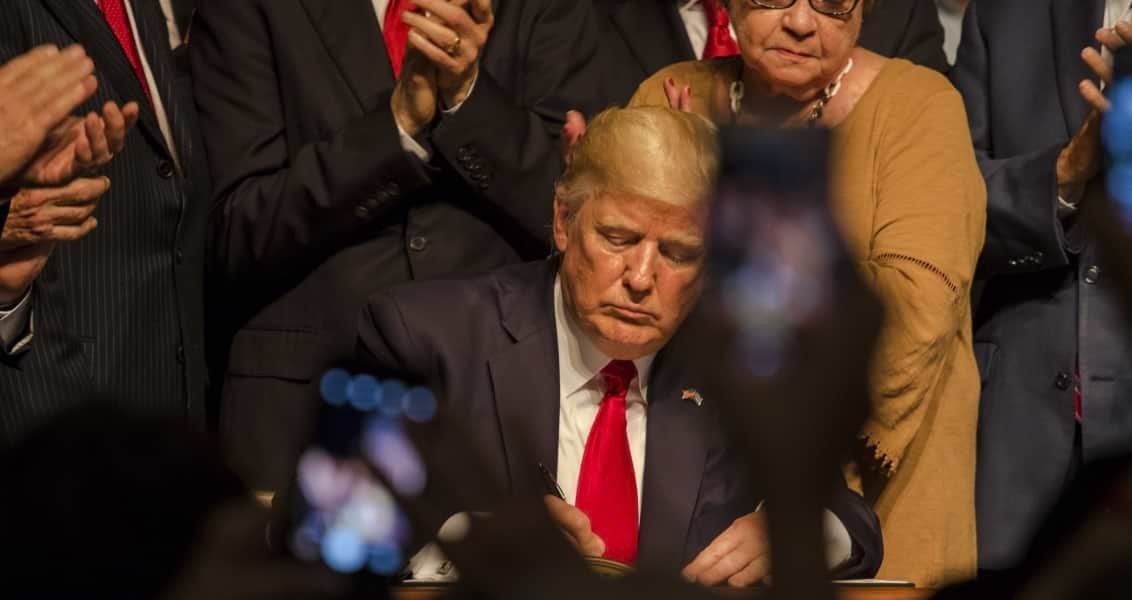 Still in its infancy, U.S. President Donald Trump’s foreign and security policies in the Middle East can be summarized as incoherent and enigmatic. Approximately half a year has passed since Trump came to the White House, and with that, a lot of discussion regarding his policies has emerged. The end of the liberal world order and a possible war within which the U.S. may find itself have dominated these discussions. To support these ideas, it would be enough to encapsulate some of Trump’s policies such as indifference toward the nuclear proliferation, hostility toward some of America’s allies, i.e. some NATO members and Qatar, hostility toward Iran and, lastly, affinity with Egypt and some other repressive Arab states.

Many find that the main reason behind such enigmatic and incoherent policies is Trump’s lack of experience and lack of understanding foreign and security policies. While this assessment may hold true to some extent, it does not totally elucidate why Trump follows these policies.

The truth is that Trump is still in the learning process and, as such, he has not yet developed a comprehensive strategy. However, to accompany him throughout this process, he has chosen experienced and pragmatic advisers that can keep security policies balanced. Secretary of Defense James Mattis, National Security Adviser H.R. McMaster and Secretary of Homeland Security John Kelly are three respected generals that are directly responsible for U.S. national security policies. It is noteworthy that all three retired generals have been part of different wars, i.e., the Gulf War, the second Gulf war and the war in Afghanistan.

Currently, the U.S. faces many threats both inside and outside of its borders from Daesh, Iran and North Korea. So, what Trump needed was doers that would assist him develop new policies to solve these issues and help him maintain his campaign promises. Thus, the choice to appoint generals to key positions of his cabinet can be considered intelligent and practical.

Nevertheless, in some cases, it seems like there is a divided government, with Mattis and McMaster on one side and Trump on the other. While Mattis and McMaster tend to be more careful and remain faithful to some of the traditional national security policies, Trump seems to remain indifferent to the old ones and tends to follow new paths. These rifts within the administration were better seen in the case of Qatar when Trump, supported by his chief strategist, Steve Bannon, openly supported Saudi Arabia’s sanctions on Qatar, despite the fact that Qatar is considered to be the home of America’s most important military base in the Middle East. Mattis and McMaster, on the other hand, were more concerned and cautious, as they were worried about the deterioration of relations with a long-term ally like Qatar. Whether these rifts will get deeper in the future remains to be seen. However, despite some divergences, it is well accepted now that Trump trusts “his generals” when it comes to practical decisions and challenges, especially in a vital region such as the Middle East. It would not be a mistake to estimate that in the future, Mattis and McMasters will be the figures to mostly determine U.S. national security policies.

As mentioned previously, the Trump administration’s current security strategy is still in its infancy and cannot be placed in a specific framework. However, it is possible to make a prediction of what the security strategy will look like in the future, as long as we take into consideration Mattis, McMaster and Kelly’s roles. The military has always had a great influence on U.S. national security polices, but with three former generals in the Trump cabinet national security policies will no longer be influenced by the military. Instead, they will be directed by the military. As a result, the Trump administration, like it has been seen throughout these past six months, will not be concerned with presenting the U.S. as a standard bearer of democratic values and as a protector of human rights. On the contrary, it will tend to be more pragmatic and solve challenges ahead in the most effective and easy way possible. More specifically, while the Trump administration will remain indifferent to the internal affairs of states, it will tend to respond militarily to crises or challenges that directly impact American national security.

This assumption can be supported when we take into consideration the fiscal year 2018 Budget Proposal of the U.S. Defense Department. Based on the Defense Department statement, the main aim for 2018 is to rebuild the U.S. Armed Forces. It argues that under the Budget and Control Act of 2011, the military has become smaller, readiness has eroded and modernization has been deferred. Accordingly, the 2018 budget request would reverse this degradation and start restoring the readiness of the military to meet the challenges the U.S. faces such as rising terrorism and aggressive potential adversaries. As such, when we compare this to the budget proposal from 2017, the Trump administration has requested an increase of $20 billion dollars. This reinforces the assessment that a military-directed administration will respond militarily to any possible threat, and as such, leave the option of a possible military withdrawal from the Middle East off the table.

With this in mind, regarding the future security strategy that the Trump administration will develop in the Middle East, we would be left with the two options of heavy and light footprint approaches. The heavy footprint approach would be very risky for Trump, which is why he never promoted this policy. In this case, the Trump administration, by deploying a large number of troops, maybe even more than what former President George W. Bush did, would aim to destroy all terrorist organizations. Moreover, if this were to be successful, a second step is necessary of eliminating any possible ideology or political, social and psychological condition that would lead to the emergence of another terrorist organization. While this option seems to be the one that could end the quagmire in the Middle East, it is unfeasible and would cause great losses to the U.S.

Furthermore, Trump has always said that he will destroy Daesh, but it is clear that he does not intend to be part of the post-Daesh nation-building process and therefore focus on the elimination of any possible ideology or conditions that would lead to the emergence of another terrorist organization. As a result, the option of having a heavy footprint can be excluded, leaving us with the other option of a light footprint policy.

With a debilitated Daesh and other terrorist organizations such as al-Qaeda and al-Qaida in the Arabian Peninsula (AQAP), which have managed to survive during these years, a U.S. presence is necessary. A light footprint policy would include airstrikes, drone strikes, a considerable number of troops in the Middle East and cooperation with regional actors. Stated in this way, this policy may look similar to former President Barack Obama’s policy from 2011 to 2014. However, despite a failed policy in the Middle East, Obama has left Trump some experience of what not to do. Obama’s light footprint policy led to the destabilization of the region, and as some scholars argue, it led to the establishment and empowerment of Daesh.

Taking lessons from this, the Trump administration may increase the number of troops instead of withdrawing them as Obama did. An increase in airstrikes could be another step that would increase the effectiveness of the light footprint approach.

Lastly, Trump might be more careful with regional actors, as their support is crucial for this policy. While Obama heavily focused on violent non-state actors such as the Democratic Union Party (PYD) and its People’s Protection Units (YPG) militia, an offshoot of the PKK terrorist organization, Trump may focus more on America’s traditional allies such as Turkey. With that said, it can be assumed that the light footprint option seems the best strategy for future U.S. security policy. Indeed, the Trump administration has already taken some steps that fit this approach, i.e., the airstrikes in Syria after the regime’s use of chemical weapons and the increase in the number of troops in Afghanistan. Not surprisingly, many argue that McMaster and Mattis were the architects of these policies.

To conclude, despite that for the moment Trump’s puzzling security policy is in its infancy, the options for his administration are limited. Considering that the security policies will be mostly directed by the military, where Mattis, McMaster and Kelly play a crucial role, Trump will consider airstrikes and drone strikes as primary tools to be followed by a considerate number of troops on the ground and cooperation with America’s traditional allies.

Between Hamburg and Istanbul
Previous

One Year after July 15 Turkey’s Fight against Terrorism
Next
Loading...
Loading...
We use cookies to ensure that we give you the best experience on our website. If you continue to use this site we will assume that you are happy with it.Ok