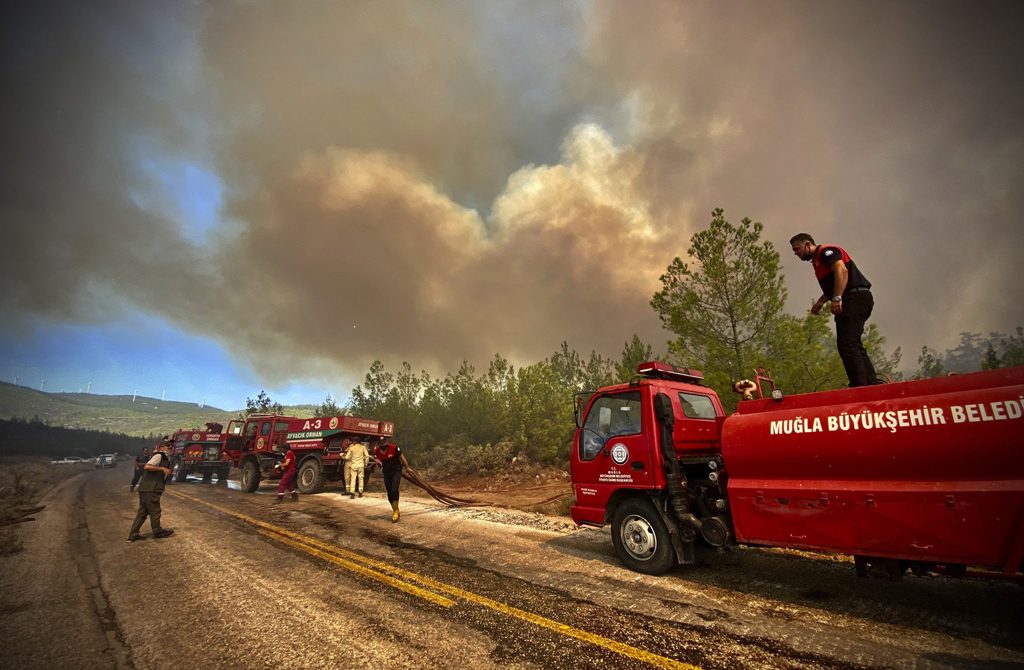 Wildfires in Turkey: Operation against the government

In some social media platforms such as Twitter and Instagram, several hashtags (helpturkey, globalcall) claiming that the Turkish government cannot cope with the wildfires or deal with other issues were used to show the Turkish state as desperate and incompetent.

The Turkish government and state have been challenged repeatedly since 2013. First, the Gezi Park protests, then the December 17 and 25 judicial coup attempts and lastly the July 15 military coup attempt targeted both the government and other state institutions.

Many domestic, regional and global campaigns were initiated to weaken the capacity and capability of Turkey. The country was discussed even during the election campaigns in different European countries.

In spite of the persistent fight of different terrorist organizations and violent non-state actors, together with the struggle of different legal political actors and also the attempts of certain regional states and global powers, Turkey has continued to protect its national security and maintain its political stability.

Despite all these attacks and many additional detrimental developments, the Turkish economy continues to grow, and Turkish security forces are mobilized within the country and in regional crises areas to protect Turkish national interests. For instance, Turkey shattered records last week by exceeding $200 billion in exports over a 12-month period. It is predicted that the Turkish growth rate will be around 5%.

Recently, even though there are no significant new developments regarding the issue, certain domestic circles and social media platforms began to discuss the conditions of refugees in Turkey.

They claim that the Turkish state is incompetent in the struggle against the refugee influx. Nowadays, the same groups have begun to exploit the forest fires in different regions of Turkey and to call for early elections and the resignation of the government.

However, when we look at the statistics regarding the forest fires in Turkey, we see that more than 130 fires have broken out in the country. After the government mobilized its resources and began to fight, more than 120 of the fires were extinguished. Only seven or eight of them continue to burn, mainly due to the dry air and strong wind. In other words, there is no extraordinary situation that may damage the political system in Turkey.

In some social media platforms such as Twitter and Instagram, several hashtags (helpturkey, globalcall) claiming that the Turkish government cannot cope with the wildfires or deal with other issues were used to show the Turkish state as desperate and incompetent.

Most of these social media accounts are fake accounts and their users live outside of Turkey. However, many real people also have used these hashtags. To make matters worse, some political figures from opposition political parties use these messages against the government. One of these hashtags calling for international help to combat the fires in Turkey rapidly reached 2.5 million impressions within several hours.

Who is the target?

There are several visible targets of the influence operation against Turkey. First of all, the main target is the government of Turkey and the personality of its president, Recep Tayyip Erdoğan.

The political opposition in Turkey and their external supporters consider Erdoğan and his government as the main obstacle to achieving their political objectives, which are abandoning the fight against the PKK terrorist group and its affiliates, the purge against the Gülenist Terror Group (FETÖ) members and the putschists, its claims in the Eastern Mediterranean, its military interventions into the regional crises such as Syria, Libya and Karabakh, and its Ankara-centered foreign policy understanding. In other words, the main objective of these operations is to bring Turkey back to its Cold War-era vulnerable position.

Second, this campaign tries to mobilize the Turkish people against the government. They also play one social or political group against another in order to create social and political instability.

Therefore, they exaggerate the negative developments, such as the refugees living in the country, and play with socio-political fault lines such as Turks-Kurds, Alawites-Sunnis and secularists-conservatives.

For example, it was revealed that a short video shared by a pro-PKK group claiming responsibility for the fires actually belongs to an unrelated recording from the year 2019.

This is clear in the messages shared by internal and external social media accounts. For instance, a leading dissident journalist’s reaction to the forest fires in Greece and those of in Turkey shows her biased perception towards her own country.

Some dissident journalists claim that no country offered help to Turkey, while some others have claimed that the government has refused the help offered by some countries such as Greece and Israel.

All these messages and claims were/are refuted by their colleagues on the ground and also by official explanations. Once more, internal and external forces have witnessed that Turkey has increased its capacity and capability to deal with and control all social, political and economic problems.

Even this massive global influence operation will not change this reality. Similar to the previous ones, this operation is destined to fail. The government and all state institutions are at work and are fighting against the fires. I personally thank those who fight on the ground to extinguish the fires and I hope that the wildfires will be brought under control in a short time.

Turkish opposition’s problem with candidate image
Next
Loading...
Loading...
We use cookies to ensure that we give you the best experience on our website. If you continue to use this site we will assume that you are happy with it.Ok