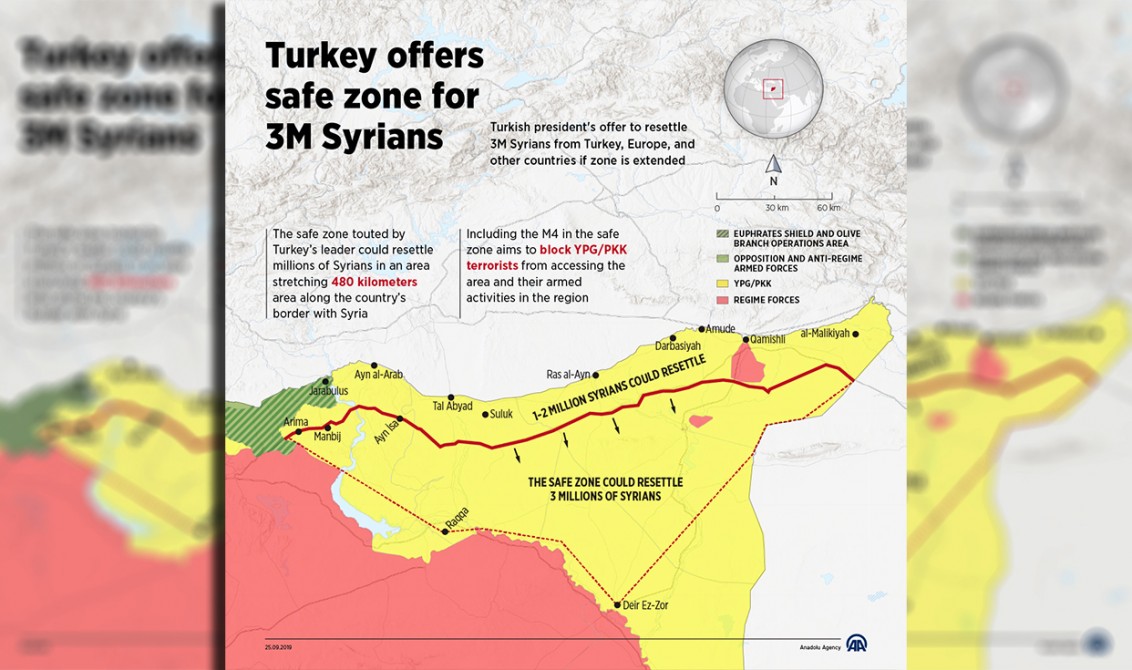 The safe zone touted by Turkey’s leader during his address to the UN General Assembly could resettle millions of Syrians in an area stretching 480 kilometers along the country’s border with Syria. Erdogan told the UN General Assembly that a peace corridor on Turkey's border with Syria will enable the resettlement of some one to two million Syrians who fled the country.

Why would Turkey re-engage Bashar Assad?

After eight long years, the Syrian civil war remains a key issue for Turkey. The fight against terrorist groups, the refugee crisis and bilateral relations with the great powers are at the heart of Turkey's domestic politics and foreign policy...

After eight long years, the Syrian civil war remains a key issue for Turkey. The fight against terrorist groups, the refugee crisis and bilateral relations with the great powers are at the heart of Turkey’s domestic politics and foreign policy. Much has been said about the alleged connection between resentment towards Syrian refugees and the Republican People’s Party (CHP) victory in Istanbul. When the main opposition party hosted an international conference on Syria last weekend, therefore, we paid close attention. There was some expectation that the event would produce some meaningful policy recommendations. Yet the CHP leadership failed to impress. In addition to inviting a known sympathizer of the PKK-affiliated People’s Protection Units (YPG) as a speaker, the hosts refrained from mentioning the group in its final communique’s section on counterterrorism.

The conference’s main conclusion, too, was a mere repetition of the main opposition’s long-standing talking point: to promote peace in Syria, Ankara must re-engage with the Assad regime.

It is good for the health of Turkey’s democracy that opposition parties seek to develop alternative approaches to policy towards Syria. The CHP conference’s conclusions, however, demonstrated that the main opposition party is out of touch with reality, let alone capable of forcing the government to revise its policy.

The claim that dialogue with Bashar Assad will somehow bring peace to Syria fails to account for the balance of power between Turkey and the U.S., Russia, and Iran in northern Syria. Moreover, to engage someone responsible for hundreds of thousands of deaths is morally problematic. Even if Turkey ignored the Assad regime’s atrocities out of political pragmatism, engaging Damascus today would cause more harm than good.

The question is quite simple: why would Turkey treat Assad like an equal, provided that it can negotiate indirectly through Moscow?

To be perfectly clear, Assad got to where he is today with Russian air power and Iranian-backed militia forces. Therefore, he is merely a secondary player in the Syrian theater. Damascus cannot sign off on anything without the say-so of Vladimir Putin or Ali Khamenei. Damascus cannot even govern areas that it managed to take back through heavy bombardment. The fate of the de-escalation zones in Idlib or YPG-controlled territories is up to Bashar Assad. Holding talks with Damascus would not facilitate the return of refugees either.

In northeastern and northwestern Syria, Turkey is playing “the game” with Russia, Iran and the U.S. No part of that game requires direct contact with Assad. The Astana process continues to yield results as a constitutional committee was established in Ankara, and pressure is mounting on the east of the Euphrates. The nature of the proposed safe zone remains ambiguous, but the dialogue continues. If necessary, Turkey will take unilateral steps to expedite the process.

At the same time, YPG militants are unhappy with their exclusion from the constitutional committee and Washington’s failure to prevent it. Russian Foreign Minister Sergei Lavrov, too, sees eye-to-eye with the Turks on the safe zone issue, viewing the YPG as a terrorist group.

Under the circumstances, here is what Turkey stands to lose by engaging Assad directly.

Ankara would have to abandon the Free Syrian Army (FSA) forces in the areas liberated by Operation Euphrates Shield and Operation Olive Branch.

In addition to keeping the 3.6 million Syrians, whom Assad has no intention of taking back, Turkey would end up admitting up to 2 million additional refugees from Idlib.

How does the CHP, which says that Turkey cannot forcibly resettle Syrian refugees in the proposed safe zone in northeastern Syria, hope to reassure the refugee community by engaging Bashar Assad? Who could possibly send back those refugees to Assad’s Syria, where the authorities seize their properties, imprison returnees and commit extrajudicial killings?

Even if Turkey ends up talking to Bashar Assad in the future, that cannot happen before the fate of Idlib and the east of the Euphrates become clear. To engage in dialogue, Ankara must put itself in a strong position to negotiate by setting up safe zones. To get there, the Turks have to ensure the FSA’s inclusion in the political transition and find ways to facilitate the return of refugees.

The CHP leadership must wake up to the fact that diplomacy, based on real power on the ground, is needed to solve the Syrian crisis – not romantic notions of diplomacy.

To be fair, this hardly came as a shock. Indeed, the CHP’s current position is in line with what its Chairman Kemal Kılıçdaroğlu said on the campaign trail: that the PKK’s Syrian affiliates do not pose a threat to Turkey.