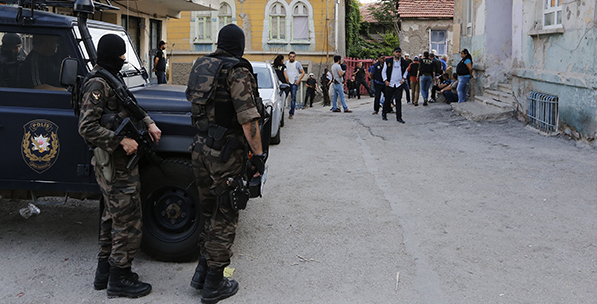 Nowadays, the HDP and the PKK find themselves at a crossroads: They will either walk further down the path of violence or reinstate the cease-fire to maximize their gains in northern Syria and reap the benefits of peace in Turkey.

Turkey’s war on terror has resulted in the arrests of more than 1,000 Islamic State of Iraq and al-Sham (ISIS) and PKK members. The Air Forces have been launching strikes against PKK positions in northern Iraq for days. Meanwhile, not a day passes by without news of another PKK attack hitting the wires. It would appear that the dreadful past came back to haunt us.

Some observers believe that the escalation reflects the Justice and Development Party’s (AK Party) eagerness to reclaim its parliamentary majority in early elections. For the staunch opponent, the military effort amounts to little more than President Recep Tayyip Erdogan’s dirty war. There could have been some merit to the argument had the PKK not publicly declared a unilateral end to the cease-fire or call on their supporters to take up arms. Here’s a valid question though: The PKK has launched attacks in the previous months and threatened to break the cease-fire. Why did Turkey wait until now to strike back? The answer is quite simple: The authorities were willing to tolerate some level of terrorist activity in order to keep the Kurdish reconciliation process going. The PKK, however, miscalculated the amount of violence that Turkey was willing to ignore.

The PKK, whose armed struggle began over three decades ago, survived tough times. Mindful of the delicate balance of Middle Eastern politics, the organization worked with a range of stakeholders including Syria, Iran, Russia and European intelligence agencies. One way or another, the PKK survived. In 1999, the organization found itself between a rock and a hard place when Turkish security forces captured its founding leader, Abdullah Öcalan, in Kenya. Still, the PKK managed to forge new alliances and transform its ideology to adapt to changing circumstances. When the Arab Spring revolutions led to region-wide turmoil, the organization skillfully seized a range of opportunities that that chaos had generated. Meanwhile, the reconciliation process made it possible for the PKK to establish control over southeastern Turkey.

When ISIS launched its atrocious campaign, the organization saw an opportunity to partner with the United States at a time when the Democratic Union Party (PYD) was expanding its territory in northern Syria at the expense of ISIS terrorists. At the same time, a wave of anti-AK Party sentiments in Turkey made it possible for the Peoples’ Democratic Party (HDP), the PKK’s political wing, to attain greater popularity. At home, the organization, through the proxy of the HDP, promoted an agenda of faux democracy by “saving” the country from the AK Party. Outside Turkey’s borders, the PKK presented itself as a secular force fighting ISIS – a secular force that obviously deserved to not be designated as a terrorist organization. When political uncertainty grew after the June 7 elections, the time had come for the PKK to maximize its gains. Finally, the stars had aligned: The PYD forces were advancing in Syria, while Turkey’s government was too weak to fight terrorism. The PKK, however, made a terrible miscalculation as greed clouded the organization’s judgment. The terrorists falsely believed that Turkey, preoccupied with coalition talks and the most recent developments in northern Syria, could not fight back. Most importantly, the organization did not think that Turkey, a NATO ally, could reach an agreement with the United States on ISIS.

The Suruç massacre and the subsequent execution of two police officers by the PKK not only carried the fight between the PYD and ISIS over to Turkey but also made it impossible for the PKK/HDP to talk about peace in western Turkey and promote violence in the east. In response to the systematic rise of violence, the government adopted a three-dimensional counterterrorism strategy. At once, the authorities cracked down on PKK networks across the country while arresting ISIS terrorists en masse. In the meantime, the country launched airstrikes against PKK targets in northern Iraq to show some muscle.

Not Turkey but the PKK Ended the Peace Process
Previous

Turkey, the Key to Change the Balance of Power in the Syrian War
Next
Loading...
Loading...
We use cookies to ensure that we give you the best experience on our website. If you continue to use this site we will assume that you are happy with it.Ok