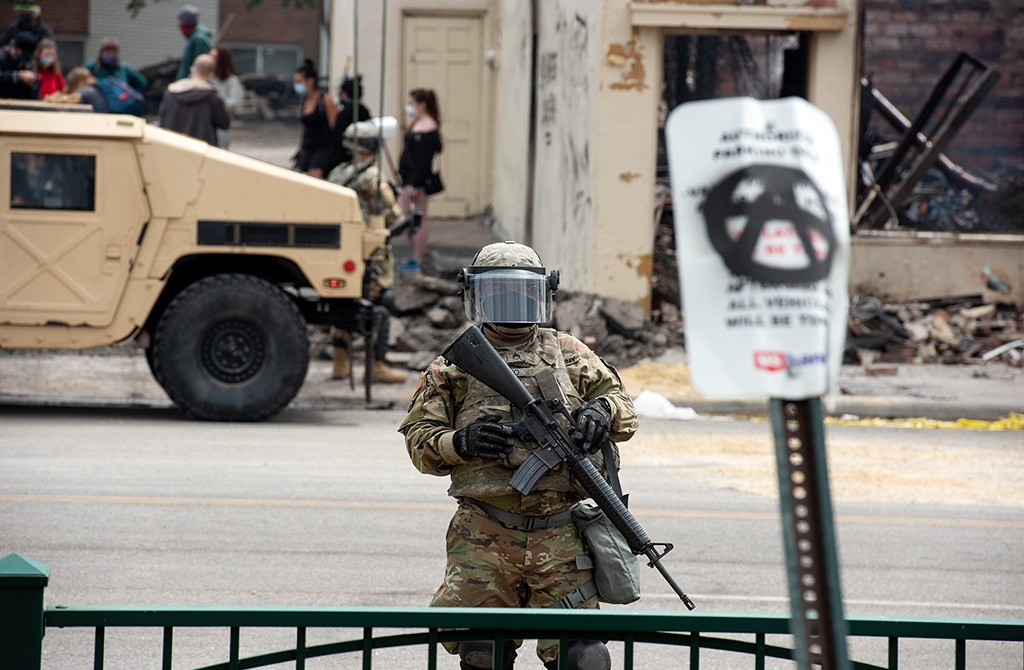 What’s going on between Trump and the US military?

The events that have unfolded in the wake of the killing of George Floyd will surely take their place in the history books. The nature of the demonstrations and the violence will likely be pored over by academics for years.

The events that have unfolded in the wake of the killing of George Floyd will surely take their place in the history books. The nature of the demonstrations and the violence will likely be pored over by academics for years.

There have been countless moments etched in our minds over the last 10 days that have been well documented: the image of President Donald Trump, Bible in hand, the peaceful demonstrators singing “Lean on Me” and the chaos of people looting stores. They will all take their place in the collective memory of the American people.

In addition to these memorable moments from the demonstrations, there are also some significant developments that will continue to be talked about for a significant period of time. One of those important instances came with the strolling out of the White House of the Chairman of the Joint Chiefs of Staff Gen. Mark Milley in full uniform.

The statements and articles that came after this event generated one of the most controversial moments in U.S. civil-military relations. It is important to note some of these to recognize the significance of what is going on.

An anonymous senior Pentagon official told the press that Secretary of Defense Mark Esper and General Milley did not intend to participate in the photo op in front of St. John’s church, which is located across from the White House. Accordingly, they were not informed about the president’s plan in advance and did not know that Lafayette Square had been cleared of demonstrators in order for the president to benefit from the image.

The senior official stated, “The secretary and the chairman were both actually heading to the Washington Field Office of the FBI to be co-located with the director of the FBI and the attorney general to observe and provide leadership for response efforts last evening.” This was a clear attempt by the top names at the Pentagon to distance themselves from the president’s position regarding the demonstrators.

Following this initial statement, Secretary of Defense Esper gave an interview to NBC about the photo op and stated that he wasn’t aware of where he was going when he started to walk with the president. “I thought I was going to do two things: to see some damage and to talk to the troops,” he said. In fact, according to Esper, they were supposed to be going to inspect a damaged bathroom in Lafayette Park.

A day after this statement, however, he decided to revise this statement, this time telling journalists that he knew where he was going but did not know what they were planning to do after they reached the church. Esper explained: “I did know that … many of us were going to join President Trump and review the damage in Lafayette Park and at St John’s Episcopal Church. What I was not aware of was exactly where we were going when I arrived at the church and what the plans were once we got there.”

Esper did not only make a revision at this point – this time he contradicted the president about the use of military units to control the situation. President Trump stated in the first few days of the demonstrations that he was ready to deploy active-duty military personnel to crack down on the protests. Secretary Esper, however, took a different position on it.

In a news conference, he stated: “The option to use active-duty forces in a law enforcement role should only be used as a matter of last resort – and only in the most urgent and dire of situations … We are not in one of those situations now.”

In the meantime, there have been reports that this contradiction between Esper and Trump marks yet more chaos in the White House in regard to decision-making mechanisms. The day after Esper’s statements, the former military generals started to make statements expressing dismay about the military’s role in cracking down on the demonstrations and President Trump’s attitude since the beginning of the crisis.

Former Chairman of the Joint Chiefs of Staff Mike Mullen wrote that the military personnel should resist being used for political purposes. He also said: “I remain confident in the professionalism of our men and women in uniform. They will serve with skill and with compassion. They will obey lawful orders. But I am less confident in the soundness of the orders they will be given by this commander in chief, and I am not convinced that the conditions on our streets, as bad as they are, have risen to the level that justifies a heavy reliance on military troops.”

A day after Mullen’s statement, former Chairman of the Joint Chiefs of Staff and former Secretary of Defense Jim Mattis talked for the first time in regard to President Trump, commenting: “Donald Trump is the first president in my lifetime who does not try to unite the American people – does not even pretend to try. Instead, he tries to divide us.”

In the midst of all of this, the current chairman of the joint chiefs of staff’s note for personnel was leaked to the media. In the letter, made out in his own handwriting, Gen. Milley stated: “We have all committed our live up to the idea that is America … We will stay true to that and the American people.”

However, it is clear that he is not comfortable with coming under fire from the U.S. military. In the coming weeks, we will see the true outcome of these developments regarding President Trump’s way of doing business and his relations with the U.S. military.

Sarraj's Turkey visit and a new era in Libya
Next
Loading...
Loading...
We use cookies to ensure that we give you the best experience on our website. If you continue to use this site we will assume that you are happy with it.Ok