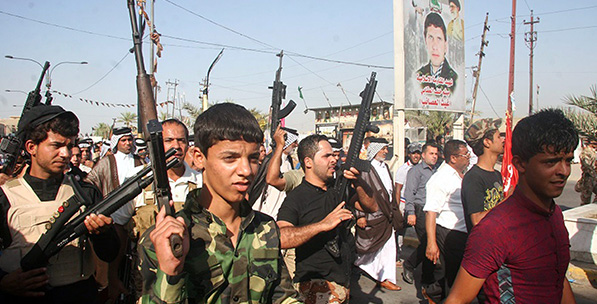 What Year Is This?

The regional actors are roughly divided into two camps. All regional administrations, except Turkey, are fighting  over each other  to extend the life of the Sykes-Picot order.

Iraq is a microcosm in the Middle East. There is not a single ethnic, sectarian, religious, political or economic group in the Middle East that is not represented in Iraq. This had been a typical example of the Middle East until modern times. That is to say, cities built by the Islamic civilization, particularly during the Ottoman era, have always been diverse in terms of religion, sect and ethnicity. The crisis began when the West carried its formula of the nation state, which had been the West’s own solution to its disasters after the First World War. In other words, with the Sykes-Picot order, millennium old sociological and political structures were destroyed by legal means.

Over the years, those who had been given power in various pieces of the Sykes-Picot order built surreal structures. Although some of these actors were able to gain traction through Arab nationalism and Ba’thism, in many ways the Sykes-Picot order remained trapped in 1918. The situation involving Iraq and Syria, today, is not all that different from what it was in 1918. We are still at the same point from where the Ottoman’s left off. Despite the fact almost a century has passed since the four century long Ottoman governance collapsed, neither the Middle East and North Africa, nor the Balkans have found peace and stability. The solution is clearly not another Ottoman rule. However, it is equally clear that there is a lot to be learned from the Ottoman era. The nation state, heir apparent to the Ottoman, lived through its own shares of disasters, just as tragic as those experienced by the artificial elements of Sykes-Picot. The century long effort to govern with Kemalism finally dwindled down at the turn of the millennium. Since then, in other words, since the transition to post-Kemalism began, Turkey, in Erdoğan’s leadership, has left 1918, and was finally able to overcome its historical jetlag with the constitutional referendum of 2010. Erdoğan and the AK Party may very well be the only successful example of an exit from 1918 without any blood being spilt.

Any intervention in the bloody crises going on in Iraq and Syria, without a serious consideration of just where and what year the crises are unfolding, will be destined to either be temporary or it will intensify the crises even further. Just how big the Sykes-Picot crisis is becomes clearer when we add the Israel problem into the chaos created by the 1918 order. Those who think Camp David updated the Sykes-Picot order were the ones who paved the road to the current predicament we are in. The European actors who to a great extent shaped the 1918 order are busy with their own crises today.

The U.S. who updated the ‘order’ after 1945 and attacked and invaded Iraq, suffers from a narrow perspective, which only intensifies the indecisiveness it displays. The United States, who refused to take a stance during the Arab revolutions but legitimized the anti-revolution movement by extending passive support, in effect, invested in the status quo.

The regional actors are roughly divided into two camps. All regional administrations, except Turkey, are fighting – over each other – to extend the life of the Sykes-Picot order. Ironically, this lines Saudi Arabia up with Iran, Iraq with Syria and Egypt with Israel. The guard posts abandoned by the West are filled up sometimes by the Saudis, and sometimes by Iran. Clearly, this is not sustainable. On the contrary, all that has happened so far indicates one thing: “There is no transition from Sykes-Picot.” The efforts of those who are trying to hold onto to the status quo and trying to take the region back to 1918 can have no other outcome.

What is next for ISIS and Maliki?
Previous

ISIS and the Geopolitics of Iraqi Oil
Next
Loading...
Loading...
We use cookies to ensure that we give you the best experience on our website. If you continue to use this site we will assume that you are happy with it.Ok