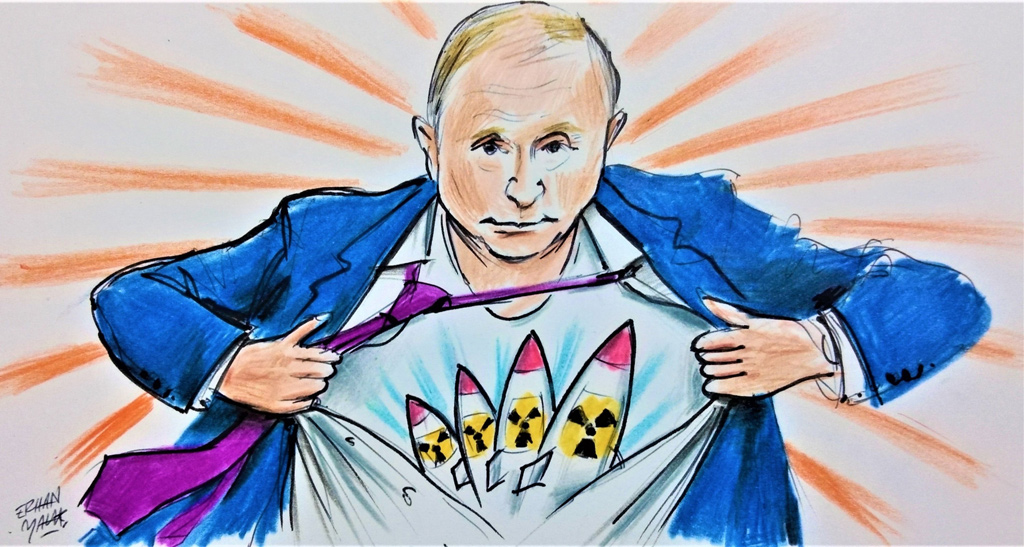 What went wrong for Russia in Ukraine

'The current pace and direction of the events indicate that Russia will come out of the war isolated, weaker and more vulnerable'

Although many observers expected a limited intervention in the southern part of Ukraine, including the Donbas region and the Crimean Peninsula, Russia attacked last week and aggressively invaded the whole country. Neither the West nor Russia expected such strong resistance from the Ukrainian government and its people. The exchange of explanations between Western politicians and the Russian state revealed their underestimation of the Ukrainian political leadership. The developments in the wake of the invasion showed that it will not be easy for Russia to achieve its objectives in Ukraine, at least not in the long run.

Russian miscalculations and overconfidence led to this disappointment since the country was expecting to capture all the big cities of Ukraine in a very short period. There are several factors contributing to this disappointment. First of all, Russia’s President Vladimir Putin and the Russian government could not justify the invasion of Ukraine for two reasons – psychological and cultural/civilizational.

Psychologically, Ukrainians are stronger than the Russians. The Russian leadership could not prepare its country’s people and soldiers for such an invasion. It seems that the Russian soldiers are not eager to fight, since they do not know the purpose of their fight. Quite the reverse, Ukrainian soldiers and people are more focused and determined since they know that they fight for political independence and the territorial integrity of their country.

In other words, they are very similar to and among the closest relatives of the Russian people. This is the first time that Russia has fought with a nation with which it shares many characteristics. Therefore, as many observers have also explained, it is quite difficult for the Russians to justify the invasion of Ukraine and the killing of Ukrainians. Targeting civilians and innocent people of Ukraine, in particular, would trigger a furious reaction from the Western public opinion.

The second factor is the failure of the Russian state to win public opinion and its domination of the information. Russia could not use its propaganda power at the desired level. Western countries have dominated the knowledge about the crisis, disseminated the Ukrainian version of the story and limited the impact of the Russian media outlets such as Russia Today and Sputnik. On the contrary, Western countries have been influencing the Russian public. In the end, after seeing bombed buildings and cities, the world recognizes Russia as an invader and aggressor.

The third factor is military failures on the ground. Russia has thought that it would take only several days to control the whole country. However, this did not happen, mainly because the Ukrainian government was expecting such a move from the Russian side, and they have accordingly prepared themselves for it. On the other hand, Russian brigades have initiated the invasion of Ukraine from different directions without taking necessary precautions. The Ukrainian state has been using its limited military power very wisely. Ukrainians are prepared for a war of attrition since they know that the longer the war goes on, the more the Russian army wears out.

Fourth, Putin did not expect Western countries to cooperate and take effective measures against Moscow. However, Putin’s declaration of war against Ukraine has proved him wrong and consolidated the Western front. Not only the G-7 and NATO but also European Union members have decided to tighten the ranks. Many Western countries were hesitant to take anti-Russian measures before declaring the war. Nevertheless, with the Russian invasion of Ukraine, almost all Western countries have mobilized to take concrete measures against Moscow. Even Switzerland, a permanently neutral state since the mid-17th century, plans to impose sanctions against Russia. After the increased threat from Russia, some relatively moderate countries such as Germany had to take a position against Moscow, while some neutral countries such as Finland and Sweden are now thinking of joining NATO. The EU has decided to send huge financial support to Ukraine to get weapons in its war with Russia. Western countries have united to take effective military, political, economic and financial measures, and impose sanctions against Russia. In other words, Putin has finally succeeded in fortifying the Western anti-Moscow bloc.

In conclusion, Putin is playing a brinkmanship strategy with the Western countries. He has been taking risks and escalating tension and the level of conflict in the Ukrainian crisis. However, he has received a strong response from the West and the world. Considering measures taken by not only states but also by international organizations, Russia has been isolated from the world. As a further step, considering Putin’s explanation about the possible use of strategic and deterrent (nuclear) weapons, the impact of which is unimaginable, it is clear that many things can go wrong for Russia in its invasion of Ukraine. The current pace and direction of the events indicate that Russia will come out of the war isolated, weaker and more vulnerable.

Search for cease-fire and Putin's hard equation
Next
Loading...
Loading...
We use cookies to ensure that we give you the best experience on our website. If you continue to use this site we will assume that you are happy with it.Ok