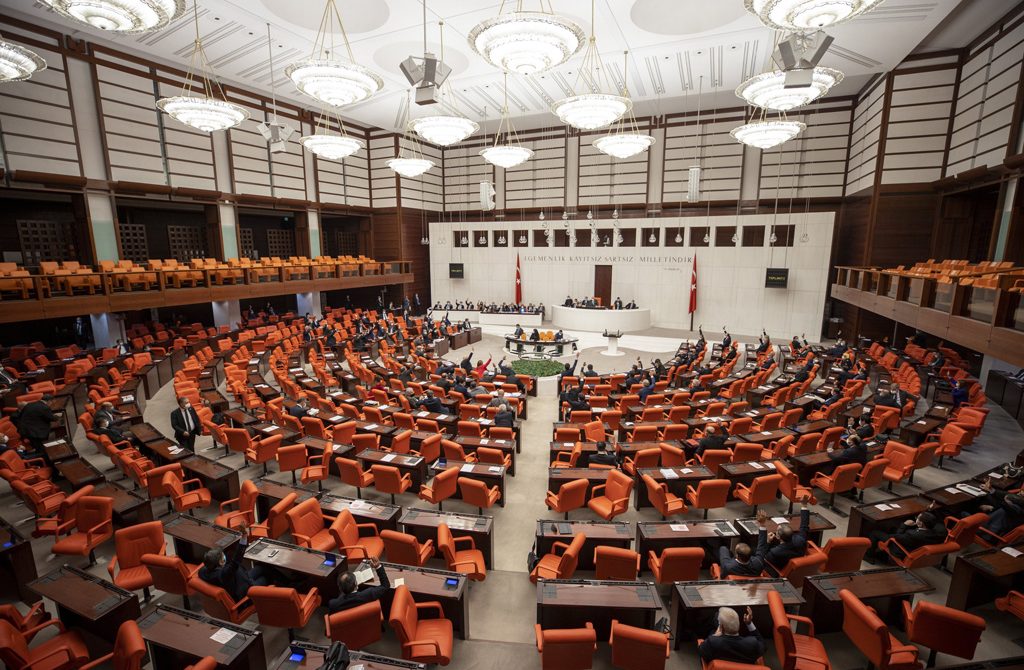 Lawmakers during a meeting at the Turkish Parliament in the capital Ankara, Turkey, Dec. 25, 2020. (AA Photo)

What is the greatest problem in Turkish politics?

Obviously, democracy requires political parties to change their views in order to find a middle ground. Temporarily suppressing one’s real views to unite around “negative politics” (opposing everything) is not a healthy attitude for the culture of democracy.

Electoral alliances have become the defining feature of Turkish politics. There was every reason to expect the People’s Alliance and the Nation Alliance to continue to compete after the 2018 elections. We also anticipated that both sides would attempt to chip away at the other’s supporters.

Alliance politics, however, have proven to attract each and every issue like a magnet, creating a more critical situation than originally anticipated. It has led to politicians no longer considering national security issues, such as the war on terror, as “common ground.”

At the same time, opposition parties view attempts to consolidate democracy, like the passing of reforms, a new constitution and human rights, only in terms of their own alliance’s priorities.

Efforts to protect Turkey’s democracy from acts of terrorism and coup attempts are met with the all-too-familiar accusation of being motivated by authoritarianism.

For the record, that allegation is no longer a reflection of the government’s performance but rather the delusion of an essentialist and reactionary mindset. They resort to a single excuse: “Everything is a tactical move, so don’t believe anything.”

The opposition thus dismisses ostensibly positive steps and proposals, quite easily, out of concern that they will somehow benefit the ruling bloc.

Turkey’s human rights action plan, which was unveiled last week, received the exact same treatment. Opposition figures even opted to downplay solutions, which the government appears to have developed in response to criticism, instead of pushing for their proper implementation.

The opposition did the same thing in response to a proposition to draft a new and civilian constitution. They attempt to reach a consensus on an “augmented” parliamentary system, but reject constitutional reform by saying that “the political climate is not right.”

In other words, Turkey’s opposition figures appear to believe that they can talk about constitutional amendments to unite the opposition, but a new constitution – something that the country needs — is off the table.

The position is informed by the fear that the various parties, which agree on the need to remove President Recep Tayyip Erdoğan from power, may end up having disagreements.

Hence the country’s inability to engage in a rational debate on policy. The same excuse is promptly served at every turn: “This is a tactical move by the government, so do not buy into it.”

Assertions that certain Good Party (IP) members allegedly have ties to the Gülenist Terror Group (FETÖ) are dismissed as “the government’s work.”

That process of disidentification results in the emergence of the CHP and IP offshoots in the political arena. Turkey thus ends up with a large number of movements opposing the government as well as their former colleagues.

Any politician that feels confident that they can obtain 1% of the popular vote proceeds to launch their own party. Twelve parties are currently represented in the Turkish Parliament, and that number is expected to reach 14 very soon.

To be clear, this is not good news for the ruling party or the opposition. The fragmentation of major parties makes it less likely that a monolithic government will be formed after the next election cycle. At the end of the day, the opposition’s real purpose should be to govern.

The debate on any given political question is informed by the position of the political parties’ respective alliance. That effectively concentrates politics around the two rims of mainstream politics.

At a closer look, this analysis is highly problematic. The ruling Justice and Development Party (AK Party) and the Nationalist Movement Party (MHP) are united by identity and policy despite certain tensions.

The Nation Alliance and its potential members, by contrast, opt to downplay their various disagreements over identity, ideology and policy for tactical and pragmatic reasons.

Obviously, democracy requires political parties to change their views in order to find a middle ground. Temporarily suppressing one’s real views to unite around “negative politics” (opposing everything) is not a healthy attitude for the culture of democracy.

It is even more problematic that political parties are fragmented and growing in number. That phenomenon could become the single greatest problem in the future of Turkish politics.

For now, Erdoğan’s strong leadership conceals the actual magnitude of that crisis and the opposition, addicted to anti-Erdoğanism, does not really care. They would rather discuss future steps.

Turkey must come together for new civilian constitution
Previous

Saudi kingdom and Biden's America at crossroads?
Next
Loading...
Loading...
We use cookies to ensure that we give you the best experience on our website. If you continue to use this site we will assume that you are happy with it.Ok