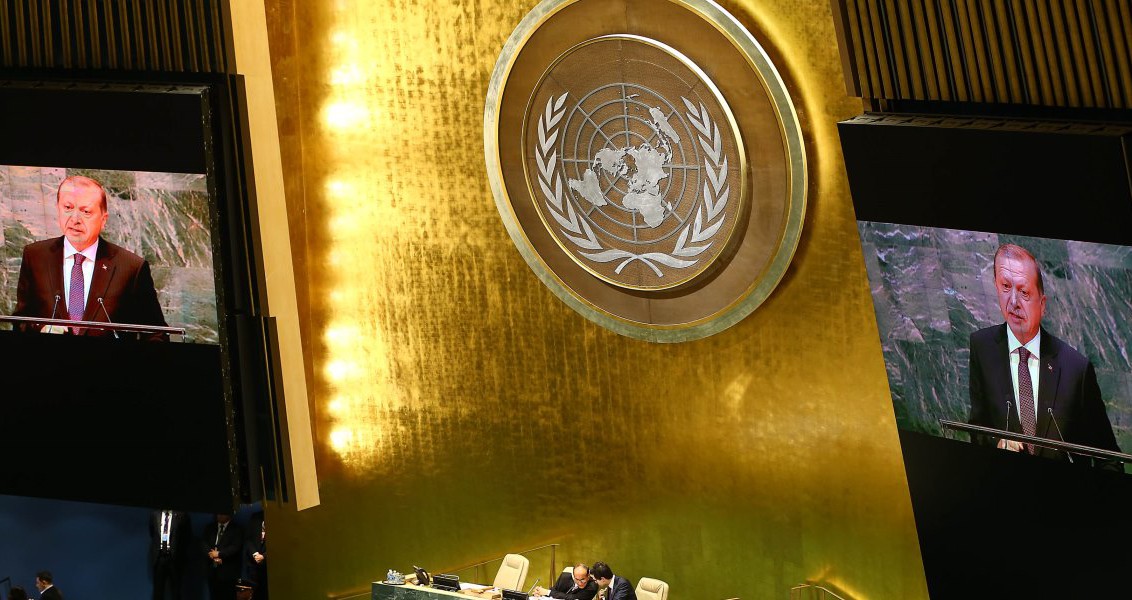 What is happening to the United Nations Order?

Turkey is working to make the U.N. meaningful and functional despite obstructions. And it should continue in its efforts.

As I write this column, the annual U.N. meeting in New York has finished up its second day and is embarking on its third day. During the period in which I was in New York, I saw that it was not just the main themes of the U.N. meeting that were problematized, but the very function and competence of the U.N. itself. For the past few days, how much the U.N. has contributed to world peace and the resolution of global problems has been under discussion in New York City. In this context, the speech given by President Recep Tayyip Erdoğan at the U.N. General Assembly was what lit the fuse on this discussion. Erdoğan carried the U.N.-related criticisms that he had first begun to formulate in 2013 to the agenda in light of new developments.

Focusing his criticisms fundamentally on the Security Council, Erdoğan spoke of the need to reform the U.N. immediately. Reiterating his slogan of “The world is bigger than five,” Erdoğan expressed the fact that the world cannot be designed according to the decisions of five countries, these being the U.S., China, Russia, the U.K., and France. According to Erdoğan, “A U.N. Security Council that does not represent the whole world cannot facilitate justice.”

While this situation to which Erdoğan drew attention lessens the U.N.’s representativeness, it also limits its abilities and problem-solving capacities. The U.N. was established in the aftermath of World War II in order to remove the painful experience of international conflict. It was organized in order to bring together the relationships of states on the international stage on a legal basis and to prevent possible violations of human rights. In a sense, the U.N. system appeared on the stage of history as a structure incumbent with the responsibility to prevent nation-state sovereignty from being violated by different countries or illegal organizations. The International Court of Justice and the Security Council were to be the main mechanisms of the U.N. But practice developed in a manner far outside this rhetoric.

Today, we see that the status quo of 1945 is falling apart. There is no need to look very far. Simply considering American and Russian responses to the Syrian crisis that has been going on for nearly six years will be enlightening enough. The present structure of the U.N. Security Council has played a central role in the inability to reach a solution on the Syrian crisis. Trusting in their positions on the Security Council, the U.S. and Russia have been able to conduct myriad manipulations at various levels within the borders of Syria. The U.S. and Russia have been able to take the steps that will make the chaos in Syria permanent due to their positions on the U.N. Security Council.

Do the processes of globalization also have a hand in the inability of the U.N. to fulfill its functions? The U.N. order, created with a reliance on the static nature of the nation-state, has begun to lose its return due to the fragmentation of nation-states and many identities above it. The best example of this can be seen by looking at the presence of supra-national terrorist organizations and the struggles conducted against them by nation-states. As is known, DAESH is a terrorist organization that is not restricted to a single country and which has a universal agenda. In the struggle against this organization, nation-states have been unable to formulate a supra-national strategy. In a sense, there are serious problems being experienced regarding it as a “common enemy.”

Let us consider the status quo the United Nations system represents today. No matter what, we can see that the U.N. is unable to formulate applicable suggestions for the resolution of our day’s most destructive problems of global reality such as migration, radicalization, cultural contrasts, and identity wars. This points to a deep crisis that cannot be connected to the existence of the Security Council alone.

Turkey is attempting to make the U.N. meaningful and functional despite obstructions. And it should continue in its attempts. Because this platform, despite all of the aforementioned deadlocks, is the most important apparatus in the hands of the world’s countries. But the age of regarding the U.N. as a magic key is over. The question now is; what kind of status quo will form in the place of the U.N. order?

Next US President Must Make Peace with Turkey
Previous

Codes of Erdoğan's US Expedition
Next
Loading...
Loading...
We use cookies to ensure that we give you the best experience on our website. If you continue to use this site we will assume that you are happy with it.Ok