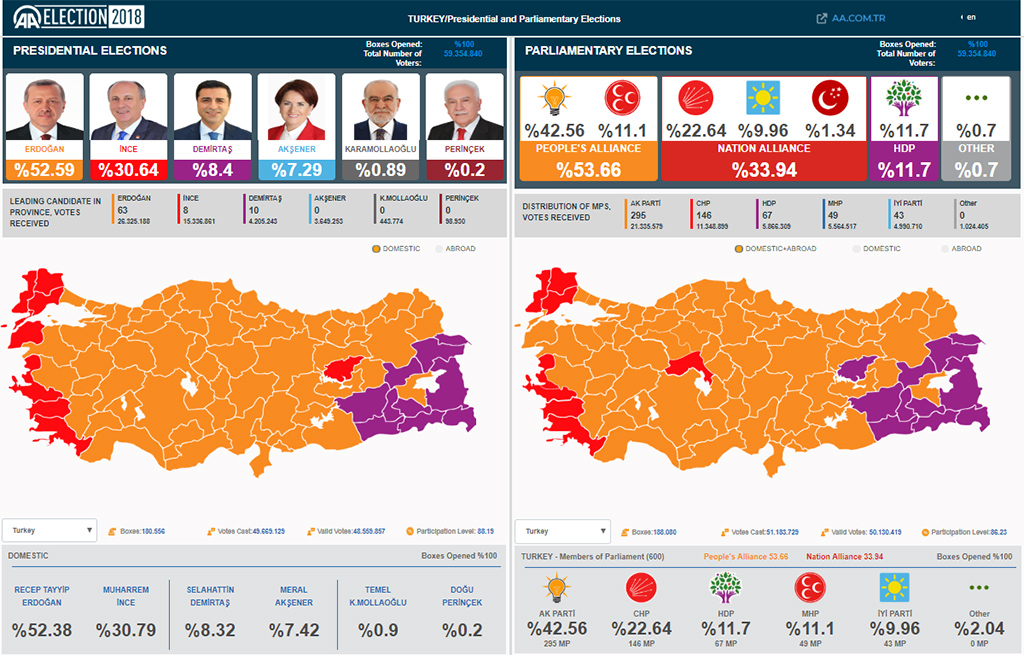 What have we learned from the June 24 elections?

May the election results serve our country and people well. Moving forward, our top priority will be to stay afloat, seize opportunities and keep growing in an increasingly unpredictable global environment and increasingly tense region.

May the election results serve our country and people well. Moving forward, our top priority will be to stay afloat, seize opportunities and keep growing in an increasingly unpredictable global environment and increasingly tense region.

Strong political leadership, political stability and an ambitious political agenda are key to achieving those goals.

Clearly, the election results created those opportunities for Turkey, established that anti-Erdoğanism alone was not enough to achieve political success, and proved that President Recep Tayyip Erdoğan was miles ahead of his opponents.

The significance of Sunday’s election for President Erdoğan was clear: it represented a hurdle that he needed to overcome in order to gain political power through democratic means. Therefore, he stressed the existential threats that Turkey encountered, shared with the people his vision for the executive branch under the new system, and unveiled his projects and campaign promises.

But what about Muharrem İnce or Kemal Kılıçdaroğlu? For them, the June 24 elections represented an opportunity to seize control of the Republican People’s Party (CHP). Both men campaigned for the leadership of Turkey’s main opposition party. The million-dollar question for them was what the result would mean for their respective political careers and their party’s leadership. Perhaps they wondered whether the CHP could be split into two.

So what was the purpose of making İnce’s campaign events look more crowded than they actually were, and “leaking” polls on steroids? To fuel chaos, obviously. They knew all along that they could not win the election – which is why they attempted to raise questions about the legitimacy of the vote itself. They wanted to lay the groundwork for another violent revolt akin to the Gezi Park uprising. In their dreams!

Ahead of the June 24 elections, the opposition was filled with rage and hatred. It was reminiscent of their sentiments during the Gezi uprising and, to some extent, the aftermath of the June 2015 elections. This unique brand of hate, which manifests itself in the form of anti-Erdoğanism, is actually directed towards all supporters of Erdoğan.

It is so uncontrollable that some opposition voters directed their anger at their family members. These people must be rehabilitated. I do not know how, but we will have to deal with them.

There was a time when talking heads for the opposition used to wait until the election ended to start targeting the people. This time around, they started long before the vote count.

The self-proclaimed elites who used to call AK Party supporters names, such as “barrelheads” and “belly-scratchers,” now claim that the whole country smells like feet.

Ahead of this election, Western officials refrained from making statements about Turkish politics, possibly assuming that their remarks would help the Erdoğan campaign. In this regard, it was a tactical move. Their decision to allow Erdoğan and his party to make campaign stops within their borders, likewise, was an attempt to de-escalate tensions. After all, the Western media remained unmistakably anti-Erdoğan.

What happens now? The Westerners will have to accept the facts and Turkey will have won in the end.

In the lead-up to Sunday’s elections, there have been serious attempts to derail the Turkish economy and the country came under serious financial attack. In particular, there were efforts to manipulate the currency rate. Luckily, they failed. Turkey will put its economy in capable hands and overcome future challenges.

The West's disappointment with Turkey's democratic elections
Next
Loading...
Loading...
We use cookies to ensure that we give you the best experience on our website. If you continue to use this site we will assume that you are happy with it.Ok