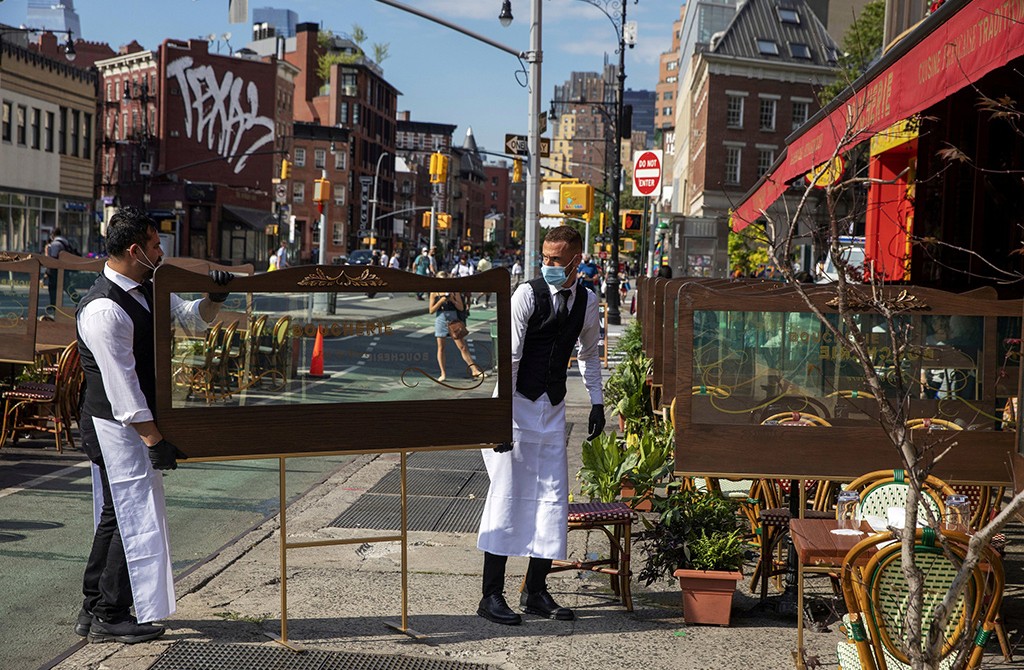 Waiters at a restaurant adjust social distancing screens outside for outdoor seating that follows current health guidelines to slow the spread of COVID-19, at a restaurant in New York City, U.S., June 25, 2020. (Reuters Photo)

What happens when wearing a mask becomes a political symbol?

It has become something ordinary to run into a headline nowadays indicating that the numbers of coronavirus cases hit a record high in the world and in some of the countries, most prominently the U.S. In the last week, on multiple days daily corona numbers passed 200,000 a day in the world. Since the beginning of the outbreak in the world, the hot spots of the pandemic have been shifting around the world.

It has become something ordinary to run into a headline nowadays indicating that the numbers of coronavirus cases hit a record high in the world and in some of the countries, most prominently the U.S. In the last week, on multiple days daily corona numbers passed 200,000 a day in the world. Since the beginning of the outbreak in the world, the hot spots of the pandemic have been shifting around the world.

The outbreak started in China and spread through Asia in December and January. The next epicenter of the disease was Europe. When the virus started to impact countries such as Italy, Spain and France, the world started to pay attention to the virus. Although now there are fears about the beginning of the second wave in Asia, in the last few months both countries in Asia and Europe managed to flatten the curve and stabilize the spread of the virus in their countries.

Yes, there is still no vaccine or medication to fight against the virus, but after flattening the curve they started the normalization process in their countries. However, the virus continued to spread to different parts of the world in the meantime. The epicenter moved to Latin America, primarily Brazil and South Asia, primarily India. But more important nowadays is what is happening in the U.S.

In March, some of the cities in the U.S. became the main hot spots in the crisis. More people died in New York City than any other city around the world since then. These cities and states which suffered greatly during March and April were able to slow down the spread of the virus. However, in the meantime, the virus started to spread in other parts of the U.S. from mid-June. Particularly states like Florida, Arizona, California and Georgia were among the hardest hit with this new wave of outbreak.

While Asia is debating about a second wave of the outbreak, the U.S. is still in the throes of the first wave of the virus. The rapid spread of the disease in these states highlights significant incompetence at the federal and state levels. Weeks ago when the state of New York became the hot spot of the virus, many health experts had warned that cases could surge in other U.S. states and precautions need to be taken to prevent the crisis.

However, the flattening of the curve in New York somehow was considered a victory by other states as well. Many states launched their normalization process even before New York state. The statistics coming from these states, in fact, demonstrated that it may not be the best time to loosen the restrictions that were adopted in March and April.

The New York Times had published a graph in early June demonstrating that the outbreak was in control in the U.S. However, the same graph of the U.S. excluding the New York state showed that the number of cases was, in fact, climbing rapidly in the remaining 49 states plus Washington, D.C.

It demonstrated that the overall graph of the U.S. was creating a misperception about the state of the outbreak in the U.S. When states launched their normalization process we started to see a speedy hike in the numbers. Now, the cases are reaching record-high numbers every day. More than 30 states demonstrate an upward trajectory in regard to coronavirus cases.

The hospitals have reached their capacity. And the hospital staff and medical personnel have started complaining about the lack of personal protective equipment. It is almost a deja vu of what has been being discussed about New York City in mid-March. It would be a disaster if what is happening right now in some of the southern metropolitan areas follows the same pattern as New York City in April.

The world, witnessing the state of the country, is wondering how a country like the U.S. failed twice in a few months in the same battle? Why do the authorities ignore the outcome of policy incompetence in an outbreak?

Today with the current death rate, approximately 4,000 people die every four days which is around the same number of casualties as in the 9/11 attacks in the U.S. In addition to the lack of competency at the state level, at the federal level, there is a push to open schools and continue with the normalization process. High test numbers are being held responsible for the high number of cases in the U.S. Most significantly the government does not seem to have a plan to fight against it.

This ambivalence at the state and federal level is generating more complications at the societal level. Wearing a mask becomes a political symbol in a highly polarized American society today. Every day on social media, videos can be seen of confrontations between the people who want to wear a mask and those who think that it is a limitation of freedoms.

Despite the warnings by health experts, social distancing is being mocked by certain groups. Despite the death of more than 120,000 people in four months, there are still people who think that some agencies are overreacting. The international community is watching carefully what is going on in the U.S. They are puzzled about the hike in the numbers a month after the flattening of the curve. They are asking how the U.S. could fail twice in four months against the same enemy.

What is the current agenda of Turkey's political parties?
Previous

Turkish opposition finds it hard to generate new politics
Next
Loading...
Loading...
We use cookies to ensure that we give you the best experience on our website. If you continue to use this site we will assume that you are happy with it.Ok