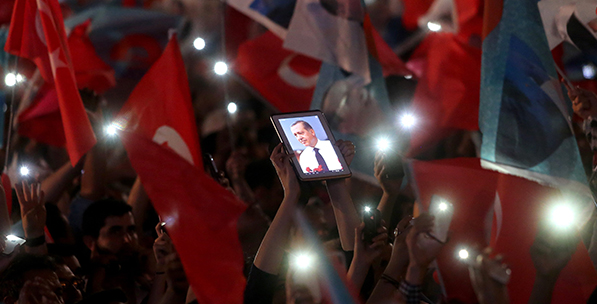 Close your eyes and think about all the political turning points since the 1990s. Now imagine that Erdoğan had been forced out of politics by the guardianship regime. The outcome would have been awfully predictable. The 1990s followed a bloody decade of post-coup political crisis. The guardianship regime reached the zenith of its influence during the “postmodern” coup of Feb. 28, 1997 and went bankrupt in an political and economic sense. An alternative scenario without Erdoğan would have, among other things, no room for the 2002 Parliament that the people brought together with stunning precision. Quite possibly, the nation, and the right-leaning majority in particular, would have become further disenchanted with politics. Like the 1960-1980 period, such widespread frustration would have entailed a dramatic drop in electoral turnout and, with no support from the core pro-normalization constituency, the Turkish government would have become the domain of arbitrary power-holders and absurd alliances. All in all, such a trend would have extended the lost years into the new millenium. The outcome thus would include severe political and social tensions. Turkey would have been a foot soldier in the U.S. invasion of Iraq and the Kurdish question would have been tangled in the nation’s relations with the KRG.

Had the establishment won, the nation would have had no choice but to indefinitely postpone much-needed democratization efforts and we would still be wasting our time with substandard debates such as how to describe the Kurdish question. A discriminatory headscarf ban would be at the heart of abnormalities in state-religion relations. As a country that waved a white flag after the 2001 financial crisis, Turkey would have a range of disaster scenarios to choose from – there is no shortage of similar situations in history including, most recently, in Ukraine. Erdoğan’s drive marked a rough start to Turkey’s normalization and government efforts in this direction have occasionally caused tensions over the years – which pundits described as polarization and authoritarianism, among other things. Thus Erdoğan emerged as not only the leader of normalization but also as a figure who skillfully managed its repercussions.

The first major reaction to normalization came on April 27, 2007, when the establishment threatened to stage a military coup. Had Erdoğan not resisted this interference by the military, things could have gone south quite quickly. After all, one’s dislike of – or opposition toward – guardianship means nothing in the absence of resolve in the face of challenges. Since the 1960s, a multitude of politicians have rose through the ranks due to their opposition to guardianship, but were quick to take a step back when the establishment fought back. It was thus the 2010 constitutional referendum that distinguished Erdoğan from his predecessors. When the guardianship regime lost power, certain organizations began to feel threatened: The PKK launched a particularly intense campaign in 2011-2012, when the country was rapidly democratizing. The same developments motivated last summer’s revolts when vandals turned away from politics and took to the streets. Similarly, the Gülen Movement’s tragic and ill-fated effort to overthrow the government represented their fear of normalization.

Erdoğan’s timely, direct and proactive moves reduced the time span of Turkey’s normalization and democratization, and promoted economic stability. Meanwhile, his opponents sought to fuel tensions in an attempt to distract attention from their dire need for constructive politics. Erdoğan’s election as president put a political figure – whose take on various key issues are already clear – in a stronger position to address the concerns of certain groups about normalization.

Turkey: Voting Out Founding Ideology
Next
Loading...
Loading...
We use cookies to ensure that we give you the best experience on our website. If you continue to use this site we will assume that you are happy with it.Ok