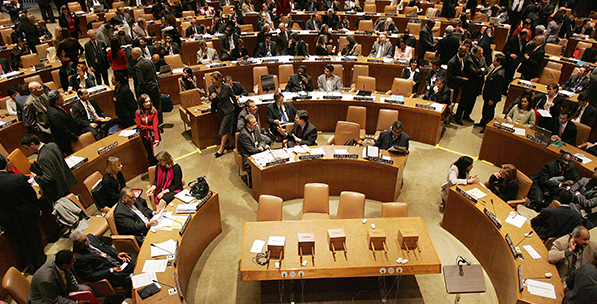 What do the UNSC Election Mean?

The U.N. Security Council (UNSC) non-permanent member elections took place last week and the results of these elections fostered many debates and discussions.

The U.N. Security Council (UNSC) non-permanent member elections took place last week and the results of these elections fostered many debates and discussions. One of the mostly cited outcomes of the elections was Turkey losing its bid for the seat after three rounds of elections.

Turkey definitely spent much effort and resources in order to be elected for this seat and its loss has disappointed many in Ankara. Although the seat does not provide much political clout in the council or veto rights like permanent members, it provides a symbolic voice to raise certain issues in this forum. The foreign ministry in Ankara will evaluate the election results and Turkey’s potential candidacy for the same seat extensively in the coming years. However, the analysis and reports about the elections pointed out some possible causes of the difference in Turkey’s vote between 2008 when it was running for the 2009-2010 term and now when it was seeking a seat for the 2015-2016 term.

Turkey was elected as a non-permanent member of the UNSC in 2008 with 151 votes in the first round of elections and became a non-permanent member after 48 years. In the first round of the elections last week, Turkey received 109 votes. Of course, the cause of Turkey’s loss can be partially attributed to its holding of this prestigious seat between 2009 and 2010. New Zealand’s last membership was more than 20 years ago in 1993-1994 and Spain’s was more than 10 years ago in 2003-2004. And as indicated by several analysts, recent media reports about Turkey, especially in regards to the conflict in Kobani, may significantly affect its attempts regarding public diplomacy. Of course, we don’t know how much “the frustration” of senior U.S. officials played in this election.

However, post-vote reports demonstrate there were other factors that need to be taken into account in order to understand the outcome. For instance, immediately after the voting, Foreign Policy magazine reported that the Egyptian government and countries that supported the military intervention in Egypt played an important role by lobbying against Turkey’s UNSC election bid. Turkey took a firm stand against the coup and denounced the massacres of pro-Morsi demonstrators in the Rabia Square. The Turkish government has been the most vocal one against this process and even in September, President Recep Tayyip Erdoğan criticized the coup and refused to attend a dinner at the U.N. because of being seated at the same table with Gen. el-Sissi. Although it may be politically costly for Turkey and has generated diplomatic problems, almost every observer of Egyptian politics has recognized that what occurred was a coup. Therefore, in the long run, Turkey may not need to feel apologetic for its stand.

Newsweek magazine also wrote a report about the UNSC elections and gave a longer list of countries that lobbied against Turkey’s membership. In addition to the Egyptian government and its supporters, the list included the Syrian regime and its supporters as well. It is not secret that Turkey is in favor of a comprehensive solution for the problem in Syria that includes the overthrow of the Assad regime, which has been responsible for the killing of tens of thousands of people over the past three years by using barrel bombs, SCUDs and even chemical weapons. Turkey is also hosting two million Syrian refugees in the country and handling this gigantic burden mostly by itself. In fact, Ankara is experiencing the pressure and problems of the Syrian civil war more than most of the other countries in the region, and it does not look like it will change its policy in the foreseeable future.

Of course, Turkey’s criticisms of the current structure of the U.N., especially the veto powers of the five permanent members, might also play an important role in the election results. Although there is a long history of criticism to the current UNSC system, for the last five years, Turkey has become the most vocal critic of the current U.N. system due to its increasing inefficiency to fulfill i

Turkey's Involvement in Somalia: Assesment of a State-Building in Progress
Next
Loading...
Loading...
We use cookies to ensure that we give you the best experience on our website. If you continue to use this site we will assume that you are happy with it.Ok