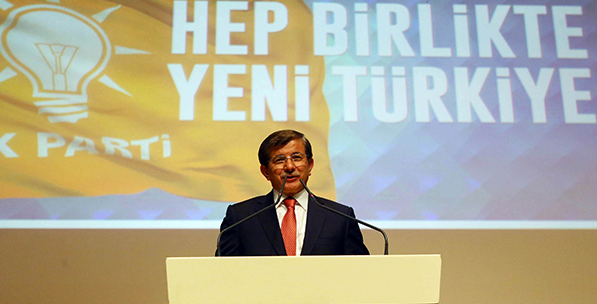 After lengthy and detailed consideration, the AK Party picked Foreign Minister Ahmet Davutoğlu to serve as chairman. A number of technical criteria, such as the three-term limit imposed by party bylaws and the understanding that the new chairman should also serve as prime minister, surely informed the party’s decision to move forward with Davutoğlu instead of other candidates. It would, however, be misleading to associate this choice exclusively with technical details, as it was closely linked to the politics of construction, which has shaped Turkish politics since 2010, and a range of challenges that this initiative encountered over the past years.

The time period between the 2010 constitutional referendum and the 2014 presidential election set the stage for a power struggle revolving around the government’s overarching goal of building the new Turkey.

The AK Party government empowered civilian politics at the expense of the guardianship regime, dubbed the old Turkey, to put an end to the tutelage era. Following the 2010 referendum, the party adopted a new mission statement and geared its efforts toward building the new Turkey on the basis of a democratic political system. In line with these changes, political actors redefined their priorities and altered the nature of political battles. The question of who would build the new Turkey based on which value set thus became central to Turkish politics. Meanwhile, the main trend turned from opposition to guardianship (2002-2010) to anti-AK Partyism (2010-present): An alliance of the old Turkey’s proponents and the proponents of a different new Turkey has created a novel opposition front against the AK Party.

Against the backdrop of Turkey’s political transformation, North Africa and the Middle East set the stage for surprising changes as popular revolts in Tunisia, Libya, Egypt and Syria shook authoritarian regimes to trigger a quest for democratic politics in the Islamic world. During this period, political movements and parties admittedly inspired by the AK Party came to power in their countries. In response, the AK Party actively sided with change against global players seeking to undermine the wave of democratic transformation. Turkey’s post-Arab Spring differences with the U.S. and EU in Libya, Egypt and Syria turned the Islamism charges, which previously revolved around the 2009 World Economic Forum and the Mavi Marmara attack, into a widely-shared notion about the country.

In light of the near-simultaneous emergence of a new alliance in Turkey and the country’s response to the Arab Spring after 2010, a range of observers at home and abroad, who had been sympathetic toward the AK Party’s policies before, turned against Prime Minister Recep Tayyip Erdoğan and his party. Global players seeking to undermine the Arab Spring joined forces with domestic opponents of the AK Party’s new Turkey agenda to turn Erdoğan and the AK Party into a convenient target of political engineering attempts including the Gezi Park protests and the Dec. 17 operation, which aimed to discredit Erdoğan and eliminate his influence over the party. While the short-term goal was to prevent the Erdoğan presidency, the longer-term objective related to minimizing the leader’s influence on determining the country’s next prime minister and the AK Party’s new chairman. After all, the question of who would become chairman under what terms was closely related to Erdoğan’s future influence, the fate of his new Turkey agenda, and the country’s regional policy.

During this period, the AK Party’s opponents led the charge against Erdoğan’s potential successors by identifying their options as either betraying Erdoğan or obeying the President-elect’s every wish. Commentators systematically praised candidates whom they thought would revisit the AK Party’s policies toward Turkey’s transformation and the Arab Spring to weaken its influence and limit Erdoğan’s power over the party organization whilst targeting others who seemed unwilling t

Erdoğan and Davutoğlu: the Right Formula for New Turkey
Previous
Davutoglu's Victory: Making the Already Known Official
Next
Loading...
Loading...
We use cookies to ensure that we give you the best experience on our website. If you continue to use this site we will assume that you are happy with it.Ok