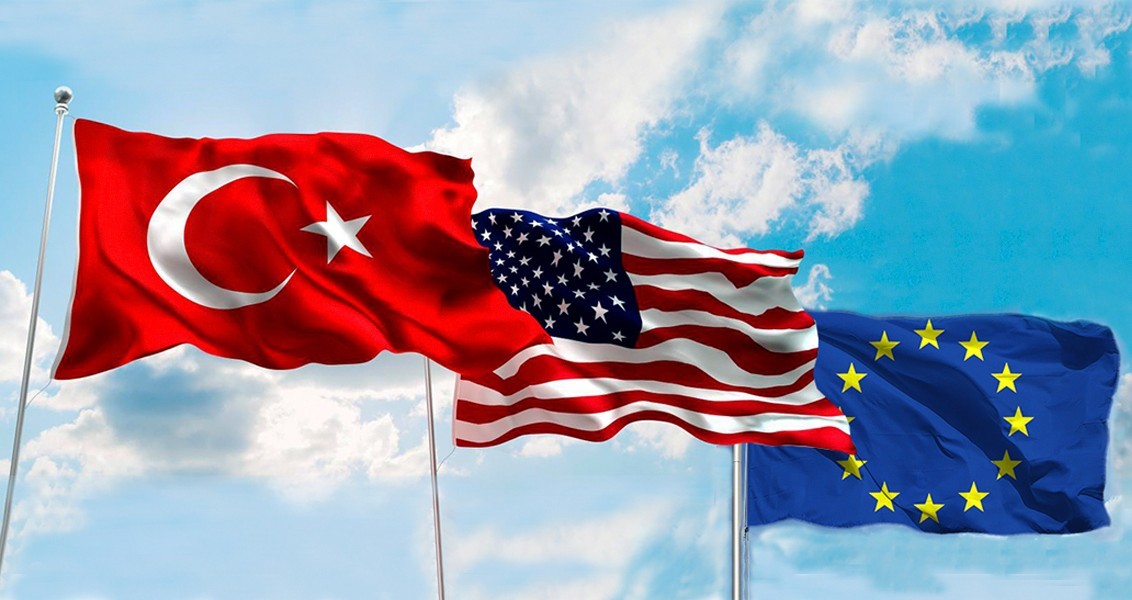 Turkey initiated a large-scale Westernization project immediately after the declaration of the Republic. It had decided to follow the footsteps of the enemy it had fought during World War I and the Independence War. It introduced many political, economic, even social and cultural reforms during the first two decades of the interwar period. In the wake of World War II, the Soviet threat further paved the way for Turkey's alliance with the West.

Turkey initiated a large-scale Westernization project immediately after the declaration of the Republic. It had decided to follow the footsteps of the enemy it had fought during World War I and the Independence War. It introduced many political, economic, even social and cultural reforms during the first two decades of the interwar period. In the wake of World War II, the Soviet threat further paved the way for Turkey’s alliance with the West.

Ultimately, Turkey became a member of most Western institutions, including the Council of Europe and NATO. Since then Turkey has been considered part of the European balance of power and therefore part of the Western world.

After the collapse of the Soviet Union and the end of the Cold War, however, the Western perception of Turkey has changed dramatically. The Turkish strategic relevance decreased in the post-Cold War era. Thereupon, Turkish officials tried to recover Turkey’s regional and international position by diversifying its foreign policy orientation.

The unjustified invasion of Iraq caused political problems between the U.S. and many Middle Eastern countries, including Turkey. Turkey did not allow the U.S. military to use its territory for deployment in Iraq. This was never forgotten by the U.S. institutions, especially by CENTCOM.

With the rise of xenophobia, ultra-nationalism, white supremacy and anti-Islamism in the West, the attempts to otherize, alienate and even demonize Turkey have increased. In other words, the tension between Turkey and the West is a direct function of the new Western perception of Turkey. I will try to list several factors influencing this tension.

First of all, the rise of anti-Islamism in the West directly contributed to Turkish-Western tension. The current political wave in the Western world is not liberal, but illiberal, conflictual and exclusivist. Among others, the Muslim world has been considered as the main other and threat. As long as this perception continues, the West will continue its anti-Turkey policies.

So, there is nothing Turkey can do to change this perception. However, the West expects Turkey to cut all its relations with the Middle Eastern countries and non-state actors and turn its back to the region as it used to do throughout the Cold War.

Second, Turkey is a successful country in terms of economic development, its allegiance to its tradition and history and its autonomous foreign policy. It has been facing many problems since 2013 when several “anti-Western regimes” faced “popular demonstrations.” The West considered all quests for autonomy against national interests and therefore tried to punish all countries who have been trying to consolidate their national political institutions and try to pursue independent foreign policies. Many governments, including in Egypt, Ukraine and Brazil, collapsed.

Turkey has been following an autonomous policy, especially in its relations with the Middle Eastern countries. It has been taking regional initiatives in the Syrian crisis and challenging Middle Eastern policies of global powers in order to protect its national security and territorial integrity. No matter what, Turkey is ready to pay any price to achieve this vital objective. However, the West wants Turkey not to take any regional initiatives and prevent any regional projections initiated by them.

Third, Turkey has been diversifying its foreign relations in order to decrease its dependency on one or several actors. This move was half voluntary, half forced: First, Turkey wants to diversify its relations as a precondition of an autonomous foreign policy, second the West declined almost all Turkish demand for buying a weapons systems for national security. Therefore, Turkey had to turn to Russia to buy the S-400 and fifth-generation fighter jets. The West has tried to force Turkey to surrender but it was able to find other alternatives, including developing its own military complex. In the end, the deterrence policy of the West did not work out and will not work.

However, the West insistently continues to attack Turkey politically, militarily, economically and diplomatically. The West supports many anti-Turkish terrorist networks and political groups active in the Middle East and in the West, including the Gülenist Terror Group (FETÖ), the PKK and its Syrian offshoots People’s Protection Units (YPG) and Democratic Union Party (PYD), the extreme-left Revolutionary People’s Liberation Party-Front (DHKP-C) and many other groups aim. In response, Turkey continues to emphasize its alliance with the West, but at the same time search for other partnerships.

In conclusion, it seems that the tension between Turkey and the West will continue fo a while. To end this tension and conflictual relationship, the West has to accept that the global balance of power has changed and that Turkey is not a weak and dependent country anymore.

While the weight of the West continues to decline in the world political arena, Turkey has been increasing its relevance in international politics. Therefore, the West has to abandon its vertical/dependent political perception of Turkey and develop a horizontal/equal relationship with Turkey. Otherwise, the West will continue to lose its allies by forcing them to have closer relations with the non-Western global powers.

In Trump's Middle East, Vladimir Putin is the real master of the art of the deal
Next
Loading...
Loading...
We use cookies to ensure that we give you the best experience on our website. If you continue to use this site we will assume that you are happy with it.Ok