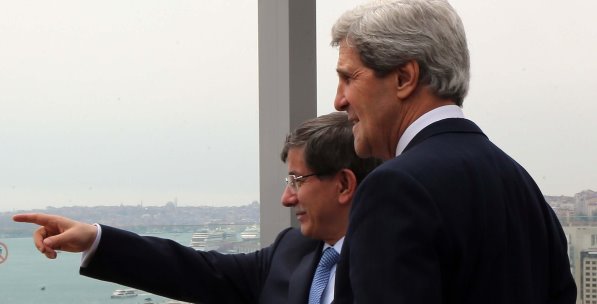 The disagreement between Turkey and the US on the Syrian issue and the coup détat in Egypt are contributing factors to increased criticism of Turkey in Washington.

Recent discussions about Turkey in Washington drew a lot of attention from the Turkish public. The latest news on the Turkish intelligence chief came at a time when disagreements between the US and Turkey over Syria, Egypt, Iraq and Israel had deepened and NATO openly voiced its opposition to Turkey’s intention to purchase a missile-defense system from China. The fact that sources from the US government were cited in the news can be considered a sign of general discomfort with Turkey’s policies.

FROM “SHIFT OF AXIS” TO “MODEL COUNTRY”

The 2010 Mavi Marmara incident followed by Turkey’s “No” vote on sanctions against Iran at the UN Security Council provoked “shift of axis” discussions in Washington. In contrast, in the wake of the Arab Spring in 2011, Turkey began to be considered a “model country” for the Middle East. These arguments were not completely new but it was strange that such a drastic shift in Turkey debates occurred within a year. In a way, this points to a level of shallowness in these discussions but Turkey’s support for democracy against oppressive regimes during the Arab Spring was the determining factor in the shift over to the “model country” debate.

Turkey’s announcement that it would host NATO radar in the town of Kürecik in the summer of 2011 suddenly ended the “shift of axis” discussion. While Israel flirted with Greece and Cyprus, it did not abandon hope in Turkey. Therefore, the pro-Israel lobby in Washington abstained from launching a systematic campaign against Turkey. The US spent a lot of effort to help reconciliation between Turkey and Israel and Prime Minister Netanyahu apologized to Turkey on President Obama’s initiative.

Despite the apology from Israel, Turkish-Israeli relations have not been normalized, which poses a problem not only for Obama’s personal prestige but also for his relations with the pro-Israel lobby. Furthermore, this weakens Obama’s hand against Netanyahu who is pushing for an aggressive posture against Iran.

DISAGREEMENTS OVER SYRIA AND EGYPT

President Obama wants to reduce the US “footprint” in the Middle East and is willing to pay only the most minimum cost possible. Due to the psychological and material cost of the wars in Iraq and Afghanistan, the US is extremely cautious about its Syria policy. As the President believes that there is not much to do about the civil war in Syria, his policies are limited to the destruction of chemical weapons, preventing the spillover of the war to neighboring countries and providing minimal support to the opposition. Iran’s recent outreach to the US has the potential to pave the way for Obama to resolve the nuclear crisis and enter into a possible dialogue with Iran on Syria.

Having limited its Syria policy to the destruction of chemical weapons and isolation of al-Qaeda linked groups, the Obama administration is seeking an agreement with Russia through the Geneva II Conference. However, Turkey’s insistence on regime change poses a problem for the Obama administration. In this sense, the widening disagreement between Turkey and the US on Syria is a significant factor contributing to increased criticism of Turkey.

Another factor provoking criticism of Turkey is its attitude towards the coup d’état in Egypt. While Turkey opposed the coup, the US administration preferred to accept the current reality. The Obama administration believes it has a clean enough record on supporting democracy in Egypt, as it accepted the election of Mohammed Morsi as president in the first place and froze certain forms of military aid to the coup administration without calling it a “coup.” Obama’s argument is that he is trying to balance values and US interests but this is not always possible. This balancing act provides us with clues about his approach on Egypt.

TOWARDS A REALISTIC RELATIONSHIP

There is Nothing Artificial about the Crisis of Occupation
Next
Loading...
Loading...
We use cookies to ensure that we give you the best experience on our website. If you continue to use this site we will assume that you are happy with it.Ok