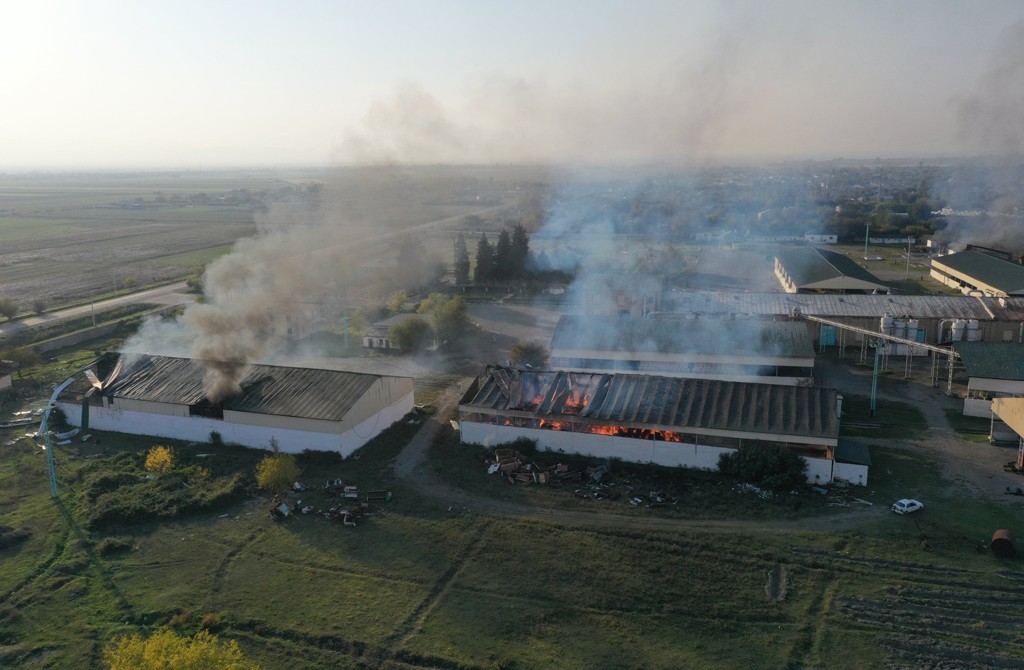 A cotton factory burns following Armenian artillery fire despite a cease-fire agreement between Baku and Yerevan, in a village in the Azerbaijani city of Tartar, Oct. 19, 2020. (AA Photo)

War crimes: What Yerevan is doing in Nagorno-Karabakh

The clashes between Armenia and Azerbaijan, which erupted on Sept. 27, have now entered the fourth week. Although the two warring sides reached an agreement declaring humanitarian cease-fires twice, they could not maintain the truce. The Armenian side insistently broke the cease-fires and continued its attacks on both the Azerbaijani military and civilians.

The clashes between Armenia and Azerbaijan, which erupted on Sept. 27, have now entered the fourth week. Although the two warring sides reached an agreement declaring humanitarian cease-fires twice, they could not maintain the truce. The Armenian side insistently broke the cease-fires and continued its attacks on both the Azerbaijani military and civilians.

Only hours after Baku and Yerevan agreed on the second humanitarian cease-fire on Oct. 10 to allow an exchange of prisoners and the recovery of dead bodies, the Armenian Army began launching missile attacks on Ganja, Azerbaijan’s second-largest city. As a response to these attacks, Azerbaijan has taken countermeasures to protect its civilians and military positions.

Since the Armenian forces have been suffering heavy losses on the battlefield, they are attempting to escalate the war into a new phase in which cities and civilians are blatantly targeted. It is clear that things are not going well for Armenia, which lost hundreds of soldiers, especially during Azerbaijan’s air bombardment.

There are reports claiming that some Armenian troops have begun to flee the army as the Armenian forces have lost at almost every front. In response, the Azerbaijan military has been gradually liberating parts of the occupied territories. According to Azerbaijani officials, some 78 residential areas (villages and towns) were liberated so far from Armenian occupation.

The latest developments are a turning point for both sides. While Armenia began to lose both land and its sense of superiority for the first time, Azerbaijan gained self-confidence and liberated some parts of its territory. Looking for an outlet, Armenia has been incessantly targeting civilian sites.

So far, more than 60 civilians have been killed and 270 wounded by the Armenian Army. For instance, 10 civilians were killed and 35 were wounded just in the city of Ganja. Last week, the Armenian military targeted civilians gathered at a cemetery for a funeral in the Azerbaijani city of Tartar, killing four civilians. According to Baku, 1,700 houses, 90 residential buildings and 327 civil facilities were destroyed or damaged during the Armenian shelling.

Armenia has intentionally been attacking and harming civilians. Azerbaijani officials and eyewitnesses stated that Armenia has been targeting residential areas such as Ganja, Mingachevir, Hızı, Shemkir and Absheron, which are far from the front line. During these attacks, many women and children have lost their lives.

The Armenian military endangers the lives of members of the press by not taking necessary measures to distinguish journalists from military troops with some Armenian troops carrying signs claiming to be press. Reports show civilians, including many children, are being forced to fight for the Armenian military.

Through its actions, Armenia has been violating the main principles of international law such as the Geneva Conventions of 1949, the Status of the International Criminal Court (ICC) and the European Convention of Human Rights (ECHR). For instance, Armenian attacks against civilians are clear violations of the ICC’s Rome Statute, Article 8(b), which considers all “intentionally directing attacks against the civilian population as such or against individual civilians not taking direct part in hostilities” as war crimes.

Similarly, Armenian attacks on health facilities, medical equipment and medical personnel are violations of Article 35 of the First Geneva Convention, while its attacks on Azerbaijani infrastructure violate Article 14 of the ECHR.

It seems that the more Armenia feels pressured, the more it will push the clash to its limits in an all-out war and humanitarian crisis. This is because Armenia cannot survive without external support and cannot win a war within the parameters of its military and economy.

It is clear that Azerbaijan has the upper hand legally, materially and psychologically. Although Armenia is the aggressor and occupier, it is weaker than Azerbaijan, which remains strong in defending its territories.

Armenia has been provoking Azerbaijan in an attempt to make the state violate principles of international law while also encouraging global powers such as Russia and the United States to intervene and transform the conflict into a regional war.

Internation legal mechanisms must force Armenia to stop its attacks against civilians and take the required measures to prevent violations of international humanitarian law.

Perspective: Turkey And Natural Gas | A Second Discovery in the Black Sea
Previous

Turkey: PKK resorts to environmental terror tactics
Next
Loading...
Loading...
We use cookies to ensure that we give you the best experience on our website. If you continue to use this site we will assume that you are happy with it.Ok