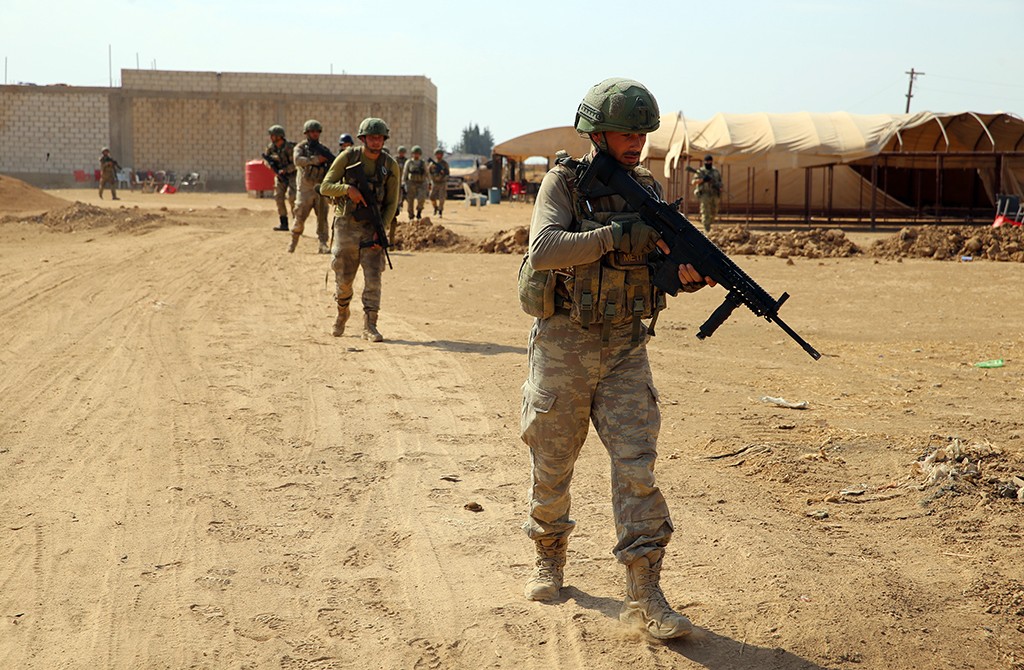 US seeks to punish Turkey for blocking PKK statelet

From sanctions against Turkey to cooperation with nonstate actors, the U.S. establishment seeks ways to help the PKK form a statelet in the region

Operation Peace Spring dealt a heavy blow to the terrorist organization PKK/People’s Protection Units (YPG), driving Western governments crazy. The U.S. House of Representatives just recognized the so-called Armenian genocide and passed a sanctions bill. The Europeans would have followed suit, had they been less worried about the refugee crisis. That harsh response is an act of vengeance – an attempt to settle the score with Turkey, which has removed YPG terrorists from its borders.

During the Obama years, U.S. officials used to say that they supported the YPG in the name of fighting Daesh, stressing that their partnership with the organization was “tactical.” Judging by Washington’s response to the Turkish incursion, that relationship was in fact “strategic” in nature. The Pentagon’s top officials, who have been leaking information to the U.S. media, were apparently disappointed to lose a proxy, in which they invested so much time and money. Turkish President Recep Tayyip Erdoğan, it would appear, disrupted the plans of those seeking to redraw the map of the Middle East.

Democrats and Republicans alike are desperate to punish Turkey and its president now. That the controversial bill passed with over 400 votes in favor reflects anti-Turkey sentiment, which has deepened in recent years. That Turkey’s move to purchase the S-400 air defense system from Russia and the U.S. withdrawal from northern Syria turned into domestic political issues worsened the situation.

The special interest groups mounting pressure on U.S. President Donald Trump, who faces impeachment, over Turkey secured the Republican’s support. Thus lobbyists for Israel, Armenia, the Greek Cypriots and the weapons industry have managed to dictate Washington’s Turkey policy. This reckless and deeply irrational act has the potential to inflict irreparable damage to Turkey-U.S. relations. The American right argues that Turkey crossed the line by cooperating with Moscow.

The left, in turn, seeks to legitimize the PKK terrorist group in the public eye by saying that the Kurds deserve their own state. Lobbyists, too, are attacking Turkey, and rejoiced at this new business opportunity. Meanwhile, U.S. Central Command (CENTCOM) officials plan their next move, seeing that their dream of a PKK/YPG statelet is on its deathbed. They look for ways to keep Syria’s oil-rich regions under YPG control and, if possible, block the group’s withdrawal from northern Syria.

I do not doubt that Washington’s current hostility toward Turkey will be the subject of future books on the weakening of the U.S. system.

Despite Washington’s utter recklessness, Ankara made a point of demonstrating its commitment to its partnership with the United States. It announced that it did not recognize either decision, as President Erdoğan recalled that America, one of the most aggressive nations in history, carried out a series of massacres over the last century. To remember the U.S. invasion of Iraq, which was based on a lie about weapons of mass destruction and resulted in hundreds of thousands of deaths, alone would suffice.

Some groups in Washington also seek to undermine the personal relationship between Erdoğan and Trump. They wish to stop the Turkish president from visiting the United States on Nov. 13. If they fail to cancel Erdoğan’s trip, they will take steps to organize protests to ruin the mood. The Turkish leader, in turn, deeply cares about his relationship with Trump. He has approached problematic areas in a rational way, without hurting that personal relationship. Despite Washington’s recklessness, President Erdoğan has acted as a responsible statesman and did his best to protect the Turkey-U.S. alliance.

To be clear, Washington’s most reckless figures have a problem with Erdoğan’s brand of leadership in Turkey. In other words, they are obsessed with the Turkish president, due to his commitment to enable Turkey to act independently in the international arena. A recent statement by Richard Haas, president of the Council on Foreign Relations, reflects that problematic approach: “As long as Erdoğan is in charge of Turkey, we need to accept the reality that we’re not dealing with a friend.”

Sadly enough, Turkey’s adversaries in Washington fail to grasp that they unite the Turkish people by supporting PKK terrorists and charging Turkey with genocide. Everyone in Turkey knows full well that sanctions on Erdoğan and his family are actually about carving out a statelet for the terrorist group PKK.

Despite everything, I enjoy seeing how the Trump era has laid bare all special interests in Washington.

US gains nothing destroying its partnership with Turkey
Next
Loading...
Loading...
We use cookies to ensure that we give you the best experience on our website. If you continue to use this site we will assume that you are happy with it.Ok