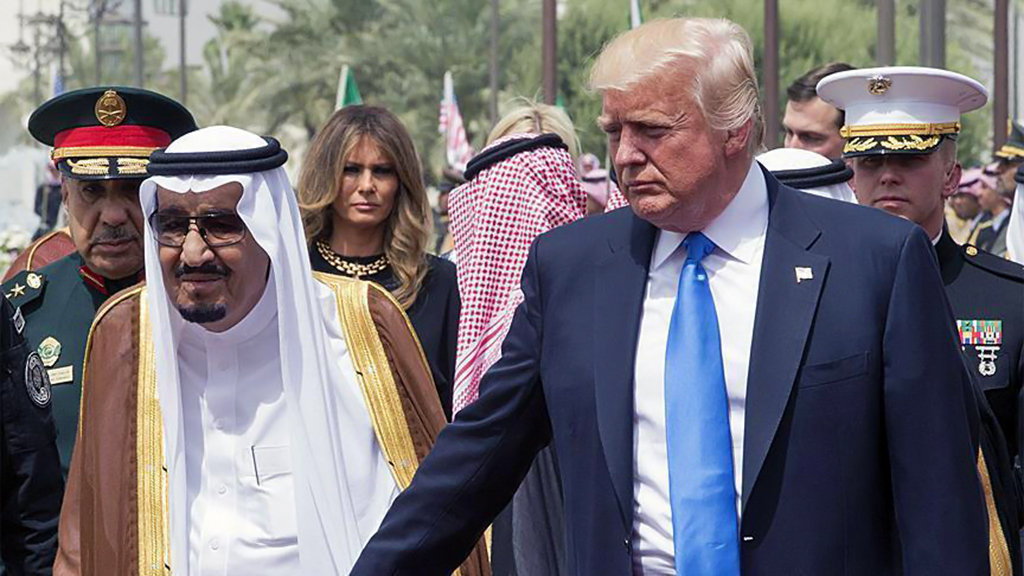 President Trump's foreign policy approach and rhetoric suggest that the United States will stick to a particularly crude brand of unilateralism permanently.

U.S. President Donald Trump made some shocking statements about Saudi Arabia’s King Salman at a campaign event in Southaven, Mississippi. He told his supporters that the Saudi monarch, and by extension the House of Saud, wouldn’t last two weeks without U.S. support. No, it wasn’t a gaffe. At another public event in West Virginia, Trump said that he told King Salman: “You have got trillions of dollars. Without us, who knows what’s going to happen?” and recalled: “With us, they are totally safe. But we don’t get what we should be getting.” The U.S. president’s comments remind everyone familiar with Turkey’s political culture of the story of Deli Dumrul – the bandit who charged one coin to anyone who crossed a certain bridges and two coins to anyone that didn’t.

President Trump’s foreign policy approach and rhetoric suggest that the United States will stick to a particularly crude brand of unilateralism permanently. After all, Washington isn’t just threatening China, North Korea and Iran. At the same time, the Americans are trying to impose new terms on their allies through blackmail, intimidation and humiliation. Trump’s most recent message to the king of Saudi Arabia, one of his closest allies, that, “You have to pay” was a lesson in crudeness. Last month, the U.S. president mocked European Commission President Jean-Claude Juncker at a joint press conference with the president of Poland: “Honestly, [Juncker] was in my office so quickly from Europe that I didn’t know they had airplanes that flew that fast.”

This new approach doesn’t reflect Washington’s eagerness to withdraw from global engagement. Instead, it shows that a new form of aggressive interventionism, tailored for American interests, has just hit the shelves. The United States currently demonstrates the arrogance of a self-centered superpower committed to keeping even its closest allies in a fragile state.

Trump’s remarks about the weakness of Saudi Arabia’s administration, which could not survive without U.S. support, were probably something mentioned in recent intelligence briefings. Sharing those assessments at a campaign event with a large crowd, in turn, was intended to deliver a boost to white American pride. Yet, Trump’s words amount to more than a sheer lack of diplomatic courtesy. Instead, we are faced with a superpower that created the post-World War II international order and was left unchallenged with the end of the Cold War that replaces its traditional role of global policeman to global bully. In other words, the United States isn’t “withdrawing” in any way, shape or form. Aggressively redefining its global presence, it revises its bilateral and multilateral relations accordingly.

This is the beginning of a new process. Although other superpowers, including China and Russia, haven’t yet confronted the United States, the world is waking up to a new reality. People around the globe increasingly feel that they must limit and contain Washington’s global influence. This was my takeaway from the shapers of global public opinion who attended the TRT World Forum on Oct. 3-4 in Istanbul, Turkey. On the same day that Trump issued a “friendly threat” to King Salman, Russian President Vladimir Putin pushed back against the United States by saying that Trump was undermining the world’s confidence in the greenback, which he described as “a typical mistake of any empire.”

The U.S. president probably wants to strong-arm Saudi Arabia’s King Salman into keeping his promise to buy $350 billion worth of U.S. military equipment. Things aren’t going well for certain Gulf countries, which hoped to secure U.S. support by highlighting the threat of Iranian expansionism. Washington has absolutely no intention to fight their war against Iran and Tehran-backed militias for the Gulf. Seizing the opportunity, the Trump administration isn’t just slapping on economic sanctions on Iran. It is also trying to rob American allies. Having failed to create a new regional order themselves, the local players are becoming easy prey to the aggressive superpower.

I wonder if anybody still remembers what happened when King Salman threatened to withdraw Saudi financial assets from U.S. banks in the final months of the Obama presidency: The crown prince seized control of Riyadh. Trump’s most recent comments suggest that the U.S. estimated back then that Saudi Arabia could resist for no more than two weeks. At the end of the day, Trump’s words about King Salman prove how significant Turkey’s ability to withstand the attack of the last five years, including the July 15 coup attempt, really was.

Erdoğan's EU referendum
Next
Loading...
Loading...
We use cookies to ensure that we give you the best experience on our website. If you continue to use this site we will assume that you are happy with it.Ok