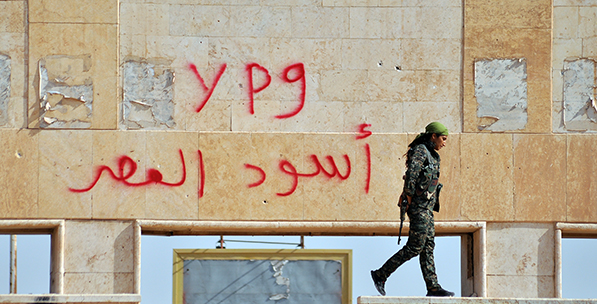 US Betting on the Wrong Horse in Syria

US support of Kurdish offshoot group in Syria could backfire in the medium-term.

The West, spearheaded by the US, has long tried to either find or create allies in the Syrian conflict with little or no success. Previous engagements with groups such as the Hazm Movement and the Syrian Revolutionary Front (SRF) openly failed, and the arms provided by the US ended up in the “wrong hands”. The emergence of the Islamic State (IS) group in Syria and the metamorphosis of the ISI in Iraq ushered in a new era of risky partnerships for the US, and the US found itself indirectly in contact with some designated terrorist organisations, such as Asaib Ahlal-Haq and the PKK.

In Syria, the IS attack on Kobane set the grounds for a new partnership between the US and the YPG – the Syrian offshoot of the PKK – and the former has provided the latter with air cover and supplies of heavy weaponry. Leaving aside the politics of abbreviations, the YPG is staffed heavily by PKK militants, under heavy influence of the mountain cadres of the PKK and shares the exact same radical ideology with the PKK. Even if one were to deal with the YPG and PKK separately for the sake of argument, the YPG is still an organisation with strong terror links, i.e. the PKK.

For instance, there is inarguably less of a difference between the PKK and YPG than there is between al-Qaeda in the Arabian Peninsula and al-Qaeda in the Indian Subcontinent, as the overlap of militants and of leadership between the PKK and YPG constitutes a relation that exceeds the level of “affiliation”. Hence, the military support given by the US to the YPG is risky at best as the YPG and PKK are interwoven and the former further cooperates with terror groups such as Marxist-Leninist Communist Party and Revolutionary People’s Liberation Party-Front in Syria, whom we last remember by a suicide attack on the US embassy in Ankara.

Granted, as the famous saying goes: ‘A drowning man will clutch at a straw, however, will the alliance with PKK affiliated group serve its purpose and remedy the IS epidemic in Syria proper in the medium to long run?

Most probably it won’t; and the reason lies in the demographics of Syria and the nature of the PKK/YPG which should be alarming for the US et al.

To begin with, the PKK/YPG is not necessarily the most effective partner in the fight against IS as we basically have had no previous case with which to compare the YPG case. The support given to the two groups cited above, Hazm and SRF, were weapons-only and lacked the critical component of airstrikes which had enabled the YPG to recover its losses from IS.

If it were not for the coalition airstrikes, the YPG probably could not have regained Kobane. IS had captured the town rather easily, and the YPG could only get it back thanks to the coalition airstrikes and the support received from the Turkish border. Despite efforts to conjure up legendary myths about the YPG fighters, who have had the luxury of fighting solely against ISIS unlike the Syrian rebels who have been fighting on several fronts simultaneously, the YPG has yet to prove its military efficiency without coalition airstrikes.

On a related note, the YPG lacks military skills to wipe IS off the Syrian map as it lacks the skills to fight effectively in the absence of coalition airstrikes. The number of YPG fighters has been inflated by newly recruited and inexperienced militants, including many child soldiers, as reported by Humans Rights Watch, who have had no previous experience in urban warfare unlike some of the IS militants who have been engaged in urban warfare since the Russian invasion of Afghanistan. It is therefore no coincidence that IS has suffered losses in Syria mostly through the airstrikes, not at the hands of the YPG militants.

Geographically speaking, the YPG controls two disconnected and heterogeneous territories in Syria which are populated by not only Kurds but also Arabs and Turkmens who have had deep suspicions about the YPG’s “separatist” agenda in Syria. The Kurds, let alone the YPG affiliated Kurds, do not have a demographic major

PKK and DHKP-C, the causes behind the Rise of the Nationalism in Turkey
Next
Loading...
Loading...
We use cookies to ensure that we give you the best experience on our website. If you continue to use this site we will assume that you are happy with it.Ok