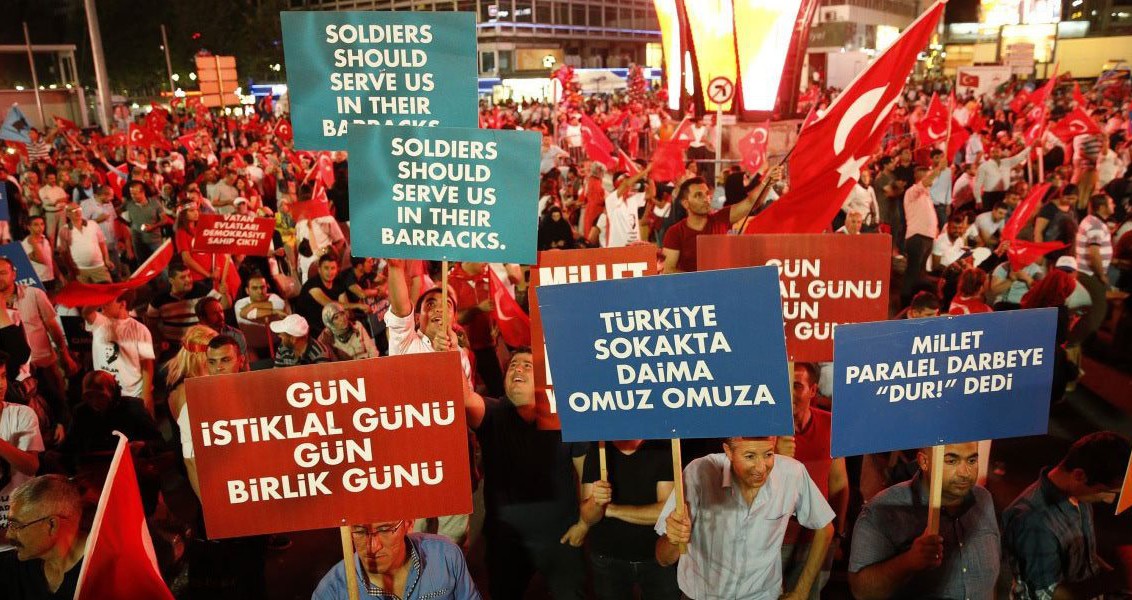 Unlearn Everything You Think You Know About Turkey

The coup attempt last month has opened new windows of opportunity for Turkey, and foreign observers should seize this opportunity to unlearn everything that they pretend to know - or think they know - about the country

The dizzying developments that have been unfolding in Turkey during the past couple of weeks are hard to digest, not only for foreign observers, but also for Turkish citizens. It is thus understandable that one may have difficulty in making full sense of the coup attempt and the horrifying nature of its perpetrators, the Gülenists. On the one hand, the extent of the Gülenist infiltration into state institutions including the armed forces, the level of violence they were prepared to resort to and their hideous involvement in organised crime, assassinations, sabotage and terrorism unearths many previous unknowns in modern Turkish history. On the other hand, the heroic resistance by ordinary Turkish people against the coup plotters, their sheer will to protect their democratic rights, the unprecedented show of unity and solidarity among different segments of Turkish society, President Erdogan’s unifying role, and the wide consensus around the eradication of undemocratic elements in state institutions have created tectonic shifts in how Turkey should be analysed.

This is not a country where simplistic explanations can make any real sense. Turkey’s intricate politics, unique political history and social background, and its ever-rising geopolitical significance have rendered making apt analyses of Turkey a Herculean task. Analysts have been falling victim to self-righteous and politically-biased approaches often shaped by wishful-thinking. Selective bias, political motivations, vulgar Orientalism and Islamophobia have combined to determine both the content and style of Turkey-related pieces published in Western media. One does not even require a rich vocabulary to publish articles about Turkey in otherwise reputable Western outlets. The use of loaded words like sultan, authoritarianism and Islamisation almost guarantee publication in a Western newspaper or journal; pieces lacking in Erdogan-bashing are gently rejected. Call Erdogan an autocrat and you might become a senior Turkey analyst; praise Erdogan, and your name may be removed from the guest commentator list.

The coup attempt last month has opened new windows of opportunity for Turkey, and foreign observers should seize this opportunity to unlearn everything that they pretend to know – or think they know – about the country; foreign journalists covering Turkey should set aside their biases and start depicting it as it is. This is not to say that there are no decent journalists who do their best to convey the reality of developments in Turkey to the outside world; it is just unfortunate that their numbers are few while Turkey-bashers rule the game.

Among other things, the coup has demonstrated clearly what Western media has called paranoia; that President Erdogan’s long-held concerns about coups d’état and his sturdy grip on the Gülenists are not baseless. For example, his insistence that both the effort to arrest the Turkish Intelligence Chief on 7 February 2012, and the corruption charges against the government in December 2013, were takeover attempts by the Gülenists is now justified by the recent coup. Besides concrete proof (including confessions by key coup plotters), it is the predominant belief of the Turkish people that the Gülenists hatched the coup plot. Although a majority of the population could not have predicted the perpetrators’ willingness to reach such levels of brutality and violence to achieve their objective, the Gülenists have managed to touch almost every single Turk in an adverse way. As such, it is no stretch of the imagination to state that the Gülenists’ involvement in crime has become common knowledge for even ordinary citizens. For those whose rights have unknowingly been violated by the Gülenists, it took a bloody coup attempt to come to the understanding that the group’s members are wolves in sheep’s clothing. Arrested and harassed army officers, bullied Military Academy students, blackmailed businessmen and politicians, eliminated civil servant candidates, and students whose exam questions were stolen and given to the Gülenists beforehand make up a huge proportion of Turkish society. This offers an explanation into why the government now commands such massive popular support – from all walks of life – for its targeting of every Gülenist establishment in the country. Missing this considerable consensus in Turkey-related analyses means that they fail to make any sense of the 15 July coup and its aftermath.

Despite – or arguably because of – the actions of a minority clique within the Turkish Armed Forces (driven by Messianic fervour), the Turks’ embrace of the culture of democracy is more encouraging than ever. The role of the ordinary people in Turkish politics has long been underappreciated by many outside observers, yet it was the ordinary people who stood up for their democratic rights against tanks, F-16s and live ammunition. In the same vein, it has been the ordinary people who have continued to empower their political representatives, whom they consider to be fit to govern a country as complicated as Turkey. It is, therefore, a grave mistake to ignore the people dimension of Turkish politics and overemphasise political leadership. As much as it is comforting to some, explaining away complex Turkish affairs with almost obsessive use of simplistic Erdogan-bashing is misleading at best and insulting at worst; they deserve much more sophisticated analyses to do them justice.

Contrary to how Turkey has been depicted in the aftermath of the coup attempt, there is an unprecedented sense of unity. In other words, the coup has brought people together rather than dividing them into opposing camps. All opposition parties were united in their anti-coup stance and declared unanimously their support for the democratically-elected government. For the first time, President Erdogan met opposition leaders such as Devlet Bahçeli and Kemal Kılıçdaroğlu, who had previously refused all invitations to the presidential compound. The ruling AK Party’s members participated in anti-coup demonstrations organised by the main opposition CHP party, something unimaginable just weeks ago. This is not to say that decades-long quarrels are over; far from it. Nevertheless, we should expect warmer ties between political parties as the coup attempt forces them to close their ranks against undemocratic interventions in politics in order to take systematic steps to prevent similar interventions in the future.

The coverage of Turkey in most international media outlets offers nothing more than unfortunate examples of selective bias with no real randomisation, and serves to deepen an already flawed understanding of the recent developments in the country. Quoting the Gülenists almost exclusively; allocating disproportionate coverage to Gülen’s whitewashing statements; decontextualizing the coup attempt; ignoring an abundance of evidence linking the coup attempt with the Gülenists; and insisting on approaching Turkey with simplistic explanations – even with conspiracy theories – is not only bad journalism, but also fails to uphold universal democratic values against a bloody coup d’état by a cultic terrorist organisation. The international media needs serious introspection on its Turkey coverage, and now is the time to provide it.

How to Read Turkish-Russian Relations?
Next
Loading...
Loading...
We use cookies to ensure that we give you the best experience on our website. If you continue to use this site we will assume that you are happy with it.Ok