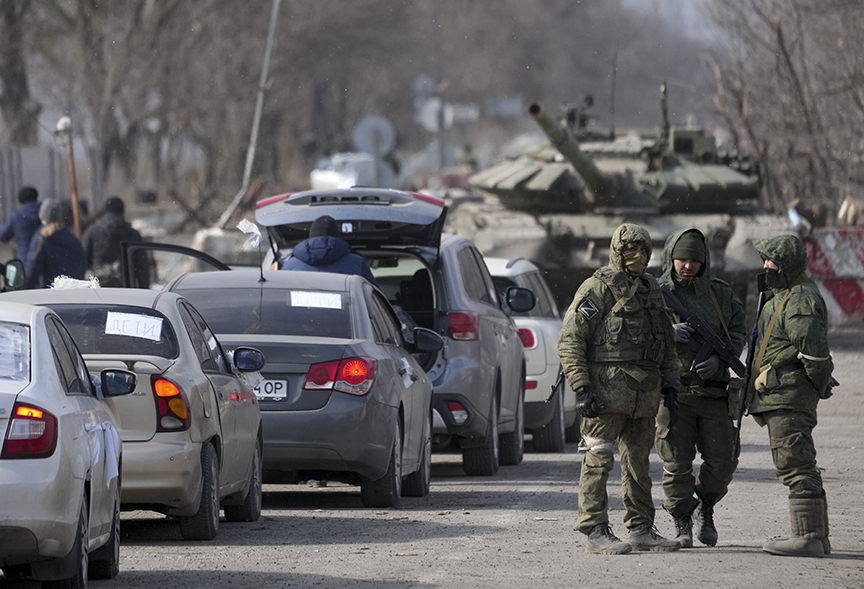 17 March 2022 | In the Ukrainian city of Mariupol, besieged by Russian soldiers and separatists, the evacuation of civilians from secure corridors continues. Civilians were evacuated to other cities in convoys, leaving their places under the control of pro-Russian separatists. ( Stringer - Anadolu Agency )

From the positions over NATO to the competition for leadership, the Russia-Ukraine war has already left its impact on the global system

Many military and political observers consider the Ukraine-Russia war a turning point in the history of world politics. Most observers also believe that the Ukrainian state and its people are the main front of the current global rivalry – not as an actor, but as an object on the table. There are several preliminary results that can be inferred from the ongoing war in Ukraine.

First of all, the United States has successfully consolidated the NATO alliance and the American leadership for the European countries. While member states renewed their allegiances to the alliance, some non-member countries that feel the Russian threat have begun to discuss possible NATO membership. However, this consolidation did not end the deep friction between the U.S. and continental European countries such as France and Germany.

Historically, France wants neither an effective NATO, i.e., American leadership, in Europe nor a strong Germany, which invaded France twice in the 20th century. Until very recently, French statespeople had considered a “militarized Germany” as a red line for the peace and stability of Europe. However, the French government has recently come to the point where it must choose between the two. Considering the waning of trust toward the U.S. and increasing friction between the U.S. and European countries, France will prefer Germany strengthening over American dependence. More and more French politicians and academics have begun to think that it is impossible to create a militarily effective European Union without a powerful Germany. It seems that the Ukraine crisis has persuaded the French government to consent to Germany becoming a military power.

Second, the Russian leadership has repeatedly explained that Russia initiated the invasion of Ukraine due to the increasing threat from NATO and the West. Russia claims that its aggression toward Ukraine is a defensive move against the Western threat. At this point, it was expected that non-Western countries, China, in particular, would support Moscow. Although China has been considered as the main challenger to the American leadership, it did not, does not and will not mobilize its resources to support Russia. Since China is not ready for a political and military clash with the U.S.-led Western hegemony, it does not want to “give an early birth” in its attempt to take over the global leadership. In other words, besides many other factors, the timing of the Russian invasion was not appropriate for China to provide support to Russia.

Fourth, the changed conditions in defense technology and the new global balance-of-power necessitate the reshuffling of cards, new calculations, new forms of alliances and new types of wars. No regional power is the bird in the hand; none of them will easily surrender to global powers. They will continue to play the cards according to their own national interests.

Last but not least, the current level of interdependency makes the punishment of any global power counterproductive. All European countries have suffered during the Ukrainian crisis one way or another. The sanctions imposed on Russia hurt not only the Russian state and its people, but also all Russian partners and customers. For example, even non-related third parties are hurt, especially by the crisis in the food and energy sectors, during the Ukraine-Russia war. Furthermore, Ukrainian refugees may create various economic, political and social problems throughout Europe in the mid- or long-term.

Rationalism or populism in Turkey's political alliances?
Next
Loading...
Loading...
We use cookies to ensure that we give you the best experience on our website. If you continue to use this site we will assume that you are happy with it.Ok