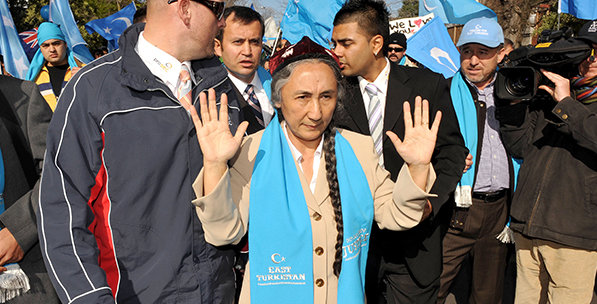 Uighurs as the Invisible Victims of the International System

The situation of Uighurs in China shows that what Assad did in Syria does not stay in Syria. Methods of repression spread and embolden other regimes. If this is not be stopped it will become a model for other oppressive governments around the world

It is not just Syrians or other Arabs that lose as a result of the situation in Syria. Humanity has lost much due to this conflict. The extent of the tragedy in Syria has blinded us to human rights violations and repression in the world. People who suffer the worst injustices and discrimination and are being violated and persecuted are increasingly becoming invisible to the international community. As the world fails to act to stop the horrible injustices in Syria, other authoritarian regimes have stepped up their repression. They have taken advantage of the international context, the attention deficit of Western governments when the issue is human rights and violent groups such as the Islamic State of Iraq and al-Sham (ISIS) to legitimize repression. During this period, Uighurs, a population of Turkic-speaking Muslims in northwestern China, have once again become invisible victims of the international system.

The conflict in Syria has resulted in various humanitarian disasters and tragedies in the region. Hundreds of thousands of people have died and millions are displaced. The pain of the families of the victims and the trauma of whole societies will take years to overcome. The country has lost its infrastructure and communities are divided. However, the tragic consequences of the conflict in Syria are not limited to Syria or its wider region. There are also important political consequences of this conflict for the region and for the world that have become increasingly visible in the last few years.

One of these outcomes demonstrated itself last week as a result of the U.S. decision to restore military aid to Egypt. The fact that pushed the U.S. to repeat this mistaken policy was the belief that bringing political “stability” to an authoritarian regime would help in fighting radical, violent groups. As mentioned in my previous column, these authoritarian leaders actually turn the countries they rule into magnets of extremism and breeding grounds for radicalization instead of bringing stability and security for Western countries. Picking the lesser evil to defeat radical groups usually does not end the worse evil. Instead, it makes all evils more dangerous and out of control. This mistaken assumption to defeat extremism has made a comeback in recent years as a result of the conflict in Syria.

The situation in Syria has also generated global consequences. In places far from the Middle East, authoritarian governments started to use the conflict in Syria as an excuse to suppress the democratic demands of the people in their countries. The conflict and massacres in Syria demonstrated the fate of countries and societies if there are waves of protest against the state. These regimes tried to gain legitimacy for their repressive rule by pointing to the destruction and death in Syria.

In addition, the survival of Syrian President Bashar Assad’s regime despite its horrendous crimes has emboldened other authoritarian regimes. They see that a regime that uses chemical weapons against its own people with impunity and other types of crimes against humanity do not generate much international reaction from Western countries and thus, these regimes become more aggressive in their use of force.

Uighurs in China have had to endure one of the most unfortunate situations since the beginning of the events in the Middle East. First, starting with the Arab Spring, Chinese authorities increased their grip on the region and targeted Uighurs in particular, who have been considered the usual suspects since the Urumqi riots in 2009 and whose religious affinity with the people in the Near East was thought to be a potential catalyst for the rise of movements for human rights and democracy among them. Freedom of expression was seriously curtailed, and to stop the impact of Arab Spring events, the level of censorship of the Internet was tightened. Most influential intellectuals who expressed some form of opposition to Chinese policies in the region were arrested and given very long prison sentences. A Uighur prof

Saving the Day and Repeating the Same Mistakes in Egypt
Previous