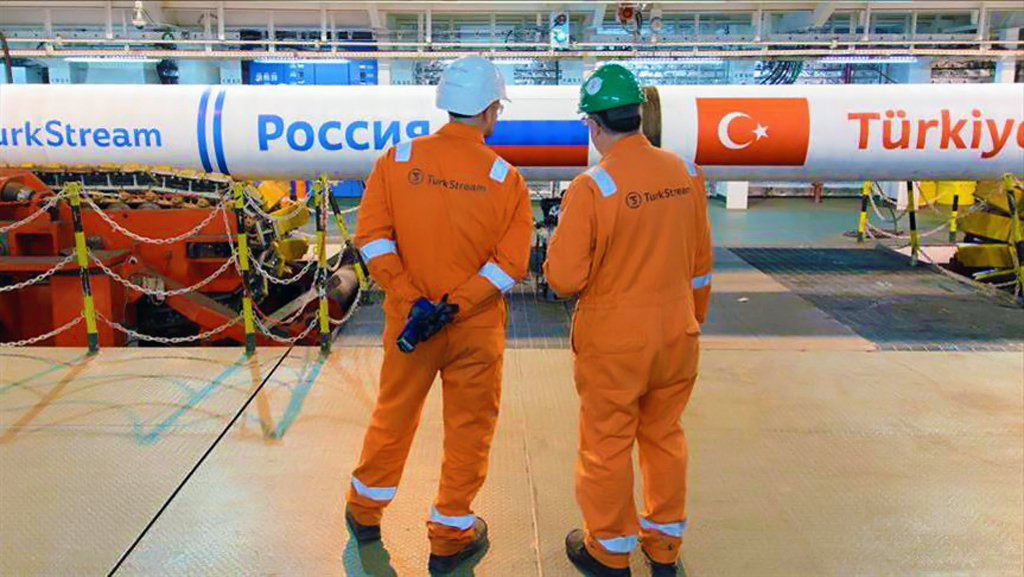 With Hungary, Bulgaria and Serbia to depend on TurkStream, Turkey’s importance to increase in terms of energy security

The inauguration of the TurkStream natural gas pipeline project, which will begin carrying natural gas from Russia to Europe via Turkey on Jan. 8, 2020, is considered a further step in Turkish and Russian relations in terms of energy.

The project, which has two lines, each of which has a carrying capacity of 15.75 billion cubic meters of natural gas, is particularly important for southern European countries. It will mark the first time that Russian natural gas will reach Europe via Turkey.

The TurkStream project transfers natural gas directly to Turkey, which the country takes from the West Line, and it means a new route for European countries. Thus, Turkey has strengthened its position as a country that contributes to the energy security of Europe.

Turkey’s claim of being an energy hub has been strengthened by the TurkStream project, which enables the country to directly take the natural gas coming from the West Line. TurkStream, which will be operated by a company established by BOTAS and Gazprom, is an important route for meeting the natural gas needs of Europe. The project, which increases the mutual dependency between Ankara and Moscow, positively contributes to the advancement of cooperation for future relations between the countries. Thus, TurkStream is significant for revealing that energy sources strengthen cooperation and ensure economic benefits rather than causing conflicts.

The West Line, one of the routes coming from Russia, reaches Turkey by passing through Ukraine and Bulgaria. Political and economic tensions between Russia and Ukraine sometimes lead to an interruption of natural gas transmission from the West Line to Turkey.

This situation poses a great risk for the Turkish economy. Transmitting the annual 14 billion cubic meters of gas from the West Line to Turkey over the first line of TurkStream, without changing terms and conditions of the existing agreements, means reducing this risk. Thus, gas will be directly transmitted from Russia to Turkey without the need for intermediate countries, and the problem of being exposed to potential interruptions caused by third parties will be eliminated. As a result, Turkey’s energy security has increased with this project.

Since the pipelines in Ukraine have reached the end of their service life, they must be repaired and replaced. Some 20,000 kilometers of a total 33,000 kilometers of transmission pipelines are more than 33 years old. A major resource is needed to further operate the pipelines which span approximately 13,000 kilometers and are 11 to 33 years old. Under these conditions, the fact that Russia acts reluctant and is willing to invest in other directions except for maintenance and repair poses another great risk to the countries that benefit from those pipelines.

Even if the TurkStream project is not carried out, it is understood that the West Line will fail to perform its former function in the future. Therefore, the problem of a lack of infrastructure that would arise in the future has been eliminated with TurkStream.

It is understood that Turkey bought an average of 26.4 billion cubic meters of natural gas per year from Russia between 2011-2018. The lowest amount was 24 billion cubic meters in 2018. It is seen that the EU countries import an average of 40% natural gas from Russia. This rate increases to 100% in some EU countries. Turkey continues to take significant steps to decrease its dependency on Russia. Benefitting more from renewable energy sources in Turkey has led to a decrease of the gas rate coming from Russia from around 60% to around 48% in 2018. Moreover, in case of full usage of the capacity of natural gas coming from TANAP allocated for Turkey in 2020, this rate is expected to fall to around 40%.

Turkey consumes an annual average of 50 billion cubic meters of natural gas and procures 99% of this amount from abroad. Not depending on one resource, it puts forward strategies prioritizing diversifying source countries with new pipelines such as TANAP as well as routes.

Likewise, Turkey, which aims to reach a storage capacity for around 10 billion cubic meters of natural gas in 2023, has the technical capacity to procure half of the natural gas it consumes as LNG (liquefied natural gas). Turkey, which follows the policy of reducing natural gas usage rates in electricity generation, increases its standing as a regional actor by participating in international energy projects. While all these developments decrease Turkey’s dependency on Russia, it increases Russia’s dependency on Turkey compared to the past with the TurkStream project.

It is understood that the natural gas structure in the Balkans will change to a certain extent with the arrival of TurkStream to the region. It is stated that the West Natural Gas Pipeline will become dysfunctional due to TurkStream. As Hungary, Bulgaria and Serbia will meet their increasing natural gas demand with TurkStream, Turkey’s importance will increase in terms of those countries’ energy security. Also, the BOTAS and GAZPROM partnership, which will operate the second line that will reach Europe, means that Turkey will economically benefit from TurkStream.

– US sanctions and possible results

It is claimed that TurkStream does not align with the strategic goals of the U.S. and the EU’s Third Energy Package legislation. On the other hand, the U.S. shows that it is against TurkStream with its CAATSA (Countering America’s Adversaries Through Sanctions Act) sanctions. The U.S. Congress increased its pressure on TurkStream and Nord Stream 2 with the National Defense Authorization Act for Fiscal Year 2020 it passed in December 2019 and by supporting some sanctions. The implementation of items targeting ships involved in laying pipes on the seabed in these projects may be on the agenda in 2020. However, as Turkish firms do not carry out the sea part of the project, it is not possible to directly implement U.S. sanctions on Turkey. On the other hand, since the TurkStream project was initiated earlier than CAATSA’s enactment, it should not be involved in these sanctions.

While TurkStream brings Ankara and Moscow closer, it also presents gains for Turkey concerning Syria and Libya, which are important issues of foreign policy. The progress and increase in this cooperation will provide significant flexibility to Turkey in foreign policy.

On the other hand, transmission of natural gas, which the EU demands, through Turkey to the EU and the increase of the amount that is carried by time are seen as a result of this cooperation. The EU will have to import more natural gas if Norway’s reserves, which are seen as an insurance due to its closeness to the EU, expire in a short time. While the U.S.’ external natural gas dependence rate was 47% in 2000, this rate increased to 55% in 2017.

It is foreseen that this rate will increase to around 70% in 2030. For this reason, Turkey stands out as one of the most reliable routes at the point for meeting the EU’s energy needs.

Projects such as TurkStream and TANAP have emerged to meet Europe’s natural gas needs. Increasing the number of these projects contributes positively especially to security and economic issues at regional and global levels. New cooperation with countries close to this geography, such as Turkmenistan, which has the largest proven natural gas reserve in Central Asia, may be established. Turkey, which is one of the key countries that will play an active role in transmitting Turkmen gas to Europe, can display its playmaker role easier with the experience it gained through TANAP and TurkStream. Therefore, it can be said that Turkey’s leadership role in energy is being strengthened in terms of the realization of international projects.

Despite Trump's policy of deterrence, Iran could still win in Iraq
Next
Loading...
Loading...
We use cookies to ensure that we give you the best experience on our website. If you continue to use this site we will assume that you are happy with it.Ok