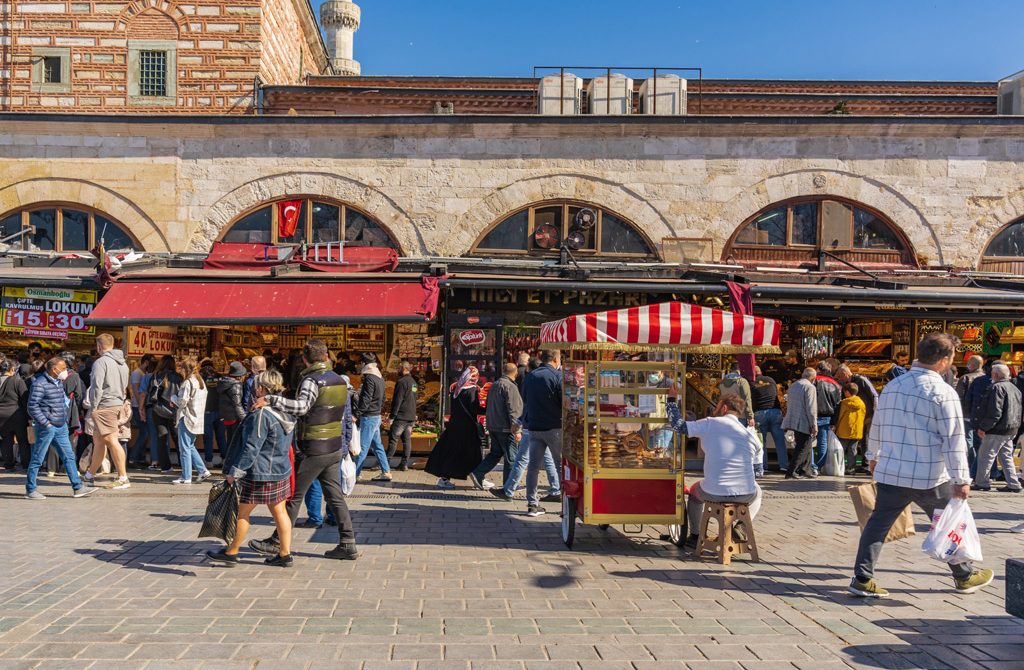 People shopping at the famous market in Eminönü during the holy month of Ramadan, Istanbul, Turkey, April 3, 2022. (Photo by Shutterstock)

Although election day is approaching, the opposition bloc in Turkey, with their 'roundtable meetings,' cannot come up with a convincing agenda to excite the electorate

The opposition has a challenging agenda. Since Turkey adopted a new election law, both opposition parties and their mentors have been contemplating various scenarios, trying to determine the best way of configuring the alliance. In the volatile market of potential presidential candidates, they are exploring the transition period and a common political agenda.

Yet, the warning signs are everywhere. Inflation has not eroded President Recep Tayyip Erdoğan’s popularity. Forming an alliance alone does not lead to an election victory. Meanwhile, the international atmosphere – including the Ukraine crisis – plays into the hands of the People’s Alliance. Yet the obvious question is, why can’t the opposition’s roundtable, around which six opposition leaders have gathered, seem to excite the electorate?

Some commentators, who focus on individuals, keep looking for a champion that will energize the opposition by challenging Erdoğan. Others, who have a rather structural approach, highlight the “problems with identity politics.” In other words, they argue that polarization and identity politics serve the interests of the People’s Alliance and prevent unity among opposition parties, including the Peoples’ Democratic Party (HDP). I posit, by contrast, that polarization benefits the opposition. How is it possible to think that polarization did not factor into the consolidation of the main opposition Republican People’s Party (CHP) and HDP bases?

So, the behavior of which voter groups are these complaints about identity politics intended to influence? That would be the current ruling Justice and Development Party (AK Party) voters, undecided voters (who state that they voted for the AK Party in previous elections) and conservatives (including religious Kurds) that still remember the CHP’s discriminatory and ultra-secularist discourse and actions. Additionally, the target audience includes voters who have a problem with the HDP’s refusal to distance itself from the PKK terrorist organization, nationalist-leaning voters and the center-right excluding the AK Party.

Everyone knows that the common ground between the six opposition parties, which consists of the “augmented” parliamentary system and the idea of “abstract democracy,” is not enough to excite and reassure the electorate. The opposition’s supporters and opponents agree on that point. For the record, I disagree with pro-government commentators who suggest that the six-party alliance could disintegrate. The opposition leaders will do everything in their power to prevent that outcome, which would render them vulnerable to the argument that “the opposition, which could not even stay together, could not possibly govern the country.” Certainly, they will try to sit around that same roundtable, even if each party ends up endorsing their own candidate, for the second round.

Indeed, the opposition bloc survived Democracy and Progress Party (DEVA) Chairperson Ali Babacan’s remarks on the Ergenekon trial and the Democratic Party (DP) chairperson’s comments on former AK Party officials thanks to CHP Chairperson Kemal Kılıçdaroğlu’s hard work. There will be no shortage of similar challenges until the 2023 election, but they will attempt to overcome them. That is why the real question is whether the roundtable has what it takes to generate political momentum – not if the opposition leaders still gather around it.

Specifically, the opposition’s roundtable has to present voters with an attractive agenda and a candidate of higher caliber who could challenge Erdoğan. Judging by recent statements by Kılıçdaroğlu and Babacan, that candidate must sign the “parliamentary system” and “transition period” pledges as well as agree to operate in line with the guidance of the six opposition leaders. That plan seems to look good on paper, but it is clear that all those calculations are part of a political engineering effort.

The CHP, DEVA and the Future Party (GP) – which collectively form the brain trust behind the table for six – could get the opposition leaders to gather around that roundtable every month. The main opposition party reportedly came up with eight different scenarios already, and I do not doubt that the rest have brilliant ideas as well. Still, anti-Erdoğanism, which laid the groundwork for cooperation, does not let those six parties go further.

Let us assume for a second that those six opposition parties will somehow leave aside their respective identities and sign off on a common agenda without color or identity. Specifically, let us assume that they will unveil a shared vision, ignoring their differences of opinion on Syrian refugees, national identity, foreign policy and certain economic questions.

Could they, even under those conditions, come up with an “exciting” response to global challenges and Turkey’s pressing problems? Would it really matter if that roundtable were to operate under those terms?

It is certainly possible for the opposition to keep gathering around the roundtable by blending the recommendations of leftist intellectuals, the CHP’s insincere efforts for inclusiveness, and the political vision of DEVA and GP. It takes much more to spark excitement in political life.

Turkey-Israel normalization undergoes series of tests
Next
Loading...
Loading...
We use cookies to ensure that we give you the best experience on our website. If you continue to use this site we will assume that you are happy with it.Ok