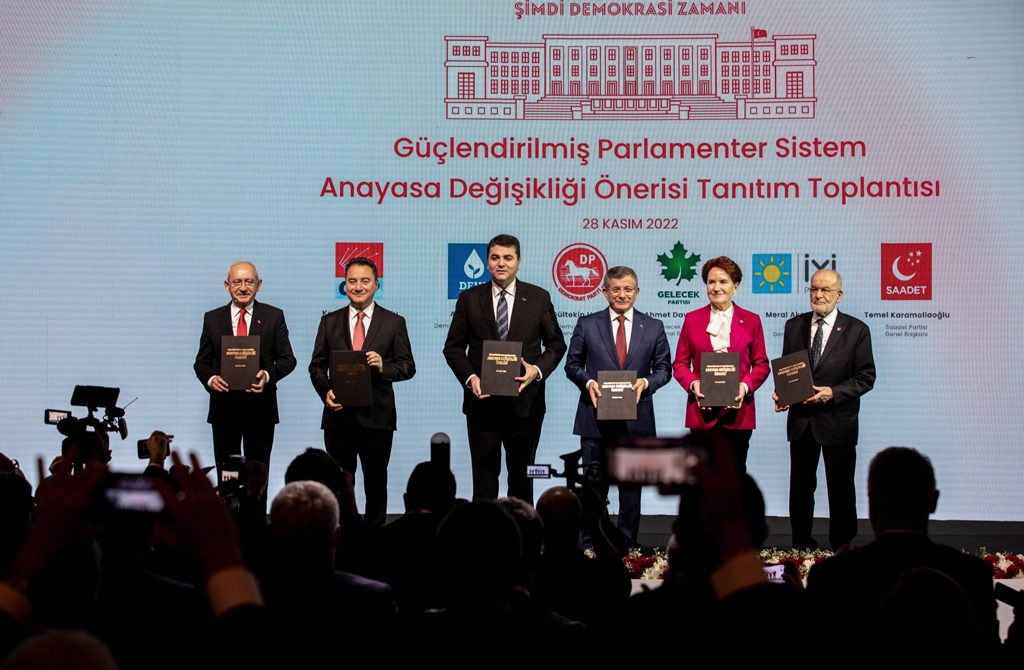 The chairpersons of the political parties in the opposition bloc – known as the “table for six” – pose as they take part in the Introduction Meeting of the Strengthened Parliamentary System Constitutional Amendment Proposal. (Getty Images Photo)

The 'table for six' made a proposal that threatens to create a fragmented system of political parties, fuel conflict within the executive branch, start a tug-of-war between the executive and legislative branches, and usher in a period of coalition governments

The “table for six” unveiled the first of its two proposed systems of government.

Ardent readers of this column will remember how I repeatedly said that the opposition was compelled to call for an “augmented” parliamentary system, yet warned that it would not be enough. Accordingly, I made the case that they must make a proposal for the 2023 presidential election, which will take place under the presidential system.

As such, the opposition parties need to establish how they will share the elected president’s powers under the current system of government to endorse a joint presidential candidate and work together in the parliamentary election.

Indeed, the latter is more important because the opposition knows how difficult it is to control enough parliamentary seats to amend the Constitution.

President Recep Tayyip Erdoğan described the opposition’s proposed system of government as a “freak.” I assume that he will find the opposition’s second plan, which involves new structures like a “coordination council,” far more freakish.

On Nov. 28, the six opposition leaders presented the “augmented” parliamentary system as a proposed constitutional amendment with 84 articles.

Notably, that proposal represented a direct reaction to the presidential system of government. Moreover, its architects appear to have tried to distance themselves from the Turkish-style parliamentary system that the 1982 Constitution had put in place. A public debate on the presidential and parliamentary systems of government would contribute to Türkiye’s democracy.

Still, I believe that the current proposal would fuel a rivalry between the president and the prime minister despite the “founding vote of no confidence.” That is because the people will elect the president, which will be reduced to a symbolic figure in many ways, per the opposition’s proposal.

Would a popularly elected president, who will not be able to engage in politics after their term, settle for a symbolic role for seven years?

Would they not weigh in on various crises that could erupt during that time?

I do not believe that the architects of the opposition’s proposal are unfamiliar with the realities of Turkish politics. It is clear, however, that the “liberal lecture” they received is unrealistic.

The “table for six” made a proposal that threatens to create a fragmented system of political parties, fuel conflict within the executive branch, start a tug-of-war between the executive and legislative branches, and usher in a period of coalition governments.

Its main weaknesses are its reactions to President Erdoğan and its commitment to coming up with a president that the current opposition bloc would like to select. Furthermore, it seems that the opposition parties, which endorse the push for parliamentarianism, will resort to the discourse of “freedom versus one-man rule” on the campaign trail.

Temel Karamollaoğlu, who chairs the Felicity Party (SP), stated on Thursday that the elected president and the six opposition leaders would “govern the country like a coalition government for five years” if the opposition were to claim less than 360 parliamentary seats. He prefers an arrangement, whereby the opposition leaders will enter Parliament – instead of serving as vice presidents, per the main opposition Republican People’s Party (CHP) proposal – and wants the elected president to pledge to govern Türkiye “in consultation with the chairpersons” who would be part of a “coordination council.”

Since that pledge would not be legally binding, however, Karamollaoğlu said that the elected president’s failure to keep their word would amount to a “total lack of character.”

It is important what the remaining opposition parties think about that. Even Karamollaoğlu’s remarks, however, indicate that the “table for six” is prone to coming up with freak formulas to determine how they will share the elected president’s constitutional powers.

In his most recent address to the CHP’s parliamentary caucus, CHP Chairperson Kemal Kılıçdaroğlu announced that they would highlight the system at the expense of the presidential candidate. That emphasis on “the system” either signals that someone other than Kılıçdaroğlu could become the joint presidential candidate or represents an admission of the fact that the opposition won’t field a champion that could compete with Erdoğan.

The main problem, however, is that focusing on the system won’t remedy the opposition’s fragmentation.

At the end of the day, both of the opposition’s “systemic” proposals rest on dysfunctional coalitions.

Turkish-African partnership model
Next
Loading...
Loading...
We use cookies to ensure that we give you the best experience on our website. If you continue to use this site we will assume that you are happy with it.Ok