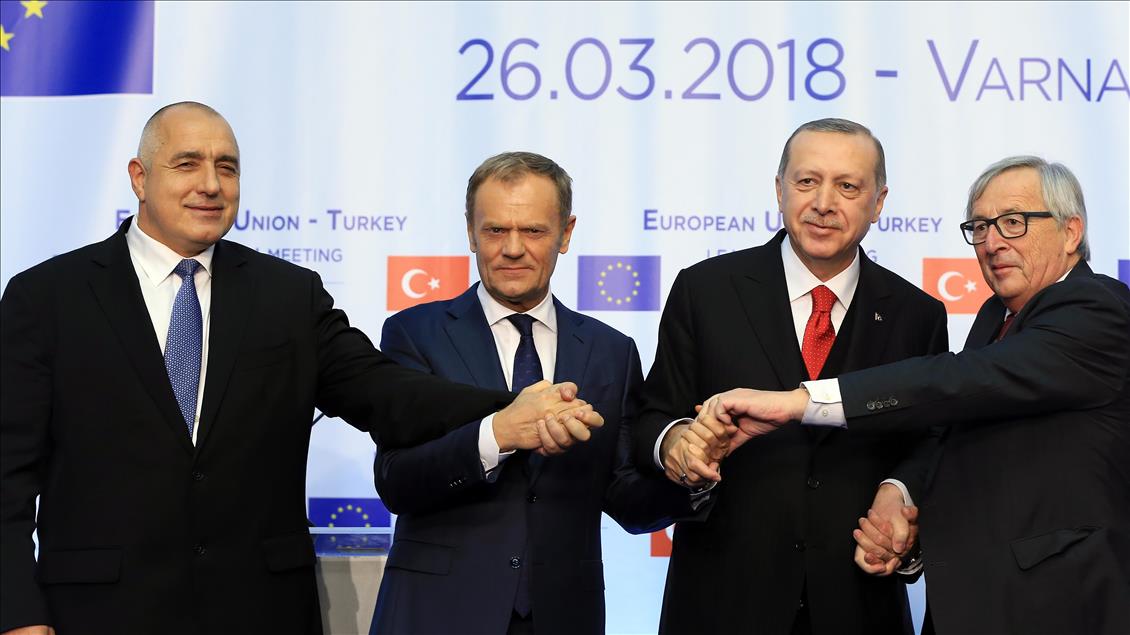 Turkish-EU relations must be settled on new ground

The EU-Turkey leaders’ summit in Varna, which was expected to pass tumultuously, was held on Monday.

The agenda of the summit was quite busy. The leading topics included the Syrian crisis, the migrant situation, the terror group PKK’s assaults on Turks across Europe, visa liberalization, updating the customs union and the tensions in the Aegean and Eastern Mediterranean regions.

As I am penning this piece, the atmosphere prevalent in the summit has yet to spread.

The organization of this summit under the term presidency of Bulgaria, which is the leading EU country profoundly feeling Turkey’s absence in the union, was a great opportunity for EU-Turkey relations. Tangible results must be accomplished at least on the primary points of the dispute by June since Austria will be the term president of the European Council for the second half of 2018. Taking positive steps will most likely be difficult under Austria’s presidency given that the country has been demanding the termination of Turkey’s membership negotiations.Meanwhile, the responses to the Afrin operation demonstrated that the Western capitals have difficulty in determining their policies for Turkey.

It seems they have come to an impasse on what route to follow with President Recep Tayyip Erdoğan.

A break in relations is inevitable unless this dilemma is resolved. Brussels does not want Turkey to step away from the EU since the country guarantees the safety and stability of Europe by hosting Syrian refugees. On the other hand, they are disturbed by Ankara changing the nature of relations and consolidating its power in Syria. They formulate this disturbance with a discourse suggesting that Ankara has diverged from democracy and EU values. However, they gloss over the fact that counterterror activities constitute an indispensable component of protecting democracy.

They are also aware that they need Turkey to stave off the uncertainties created by a world steered by U.S. President Donald Trump and Russian President Vladimir Putin.

Nevertheless, they look to restore the relations by arguing that “Turkey is not Erdoğan,” and sour by Erdoğan’s use of this need in line with Turkey’s national security interests. So, they harshen their attitude as they are afraid to act in favor of Erdoğan.

They conceal their strategic interests through their arguments stressing liberal values. The EU, however, has to be attuned to Turkey’s new security policy adopted in the aftermath of the July 15 coup attempt. The fight against the PKK and its Syrian offshoot, the People’s Protection Units (YPG), are not simply public relations designed to promote Erdoğan, but priorities for Turkey’s security. European politicians representing the purge of the PKK and the YPG from northern Syria as an invasion or expansionism has no influence on that. Also, the conflicts on the Aegean islands and the gas drilling activities in Cyprus are not based on Erdoğan’s personal motives.

These conflicts are the results of the European rationale that granted full EU membership to South Cyprus before Turkey’s accession. Moreover, the disputed islands in the Aegean and the drilling activities in the eastern Mediterranean are the subjects on which the Turkish public can agree. It must be noted that the main opposition Republican People’s Party (CHP) issued a harsh statement with regard to the row over the Kardak islets and congratulated the Turkish military’s victory in Afrin. The EU has a new approach to its relations with Turkey as the country now has a strong presence in Syria. Suggestions made to Erdoğan and Ankara remain unanswered as both Washington and Brussels have failed to do so since 2013.

Furthermore, Turkey set aside its defensive position of 2016 and adopted a policy that intervenes in the turbulence surrounding the country, while Erdoğan has consolidated domestic politics with the People’s Alliance in the running for the 2019 election. Therefore, a new basis for cooperation is needed instead of tensions that could strain relations further. In this respect, the warning of former German Foreign Minister Sigmar Gabriel, who remarked that Turkey’s declining inclination toward Europe would place Europeans at great risk, must be noted.

In order to restore relations, it is necessary to see how Turkey’s and Europe’s long-term strategic interests coincide.

Afrin operation opens new page in Syria
Next
Loading...
Loading...
We use cookies to ensure that we give you the best experience on our website. If you continue to use this site we will assume that you are happy with it.Ok