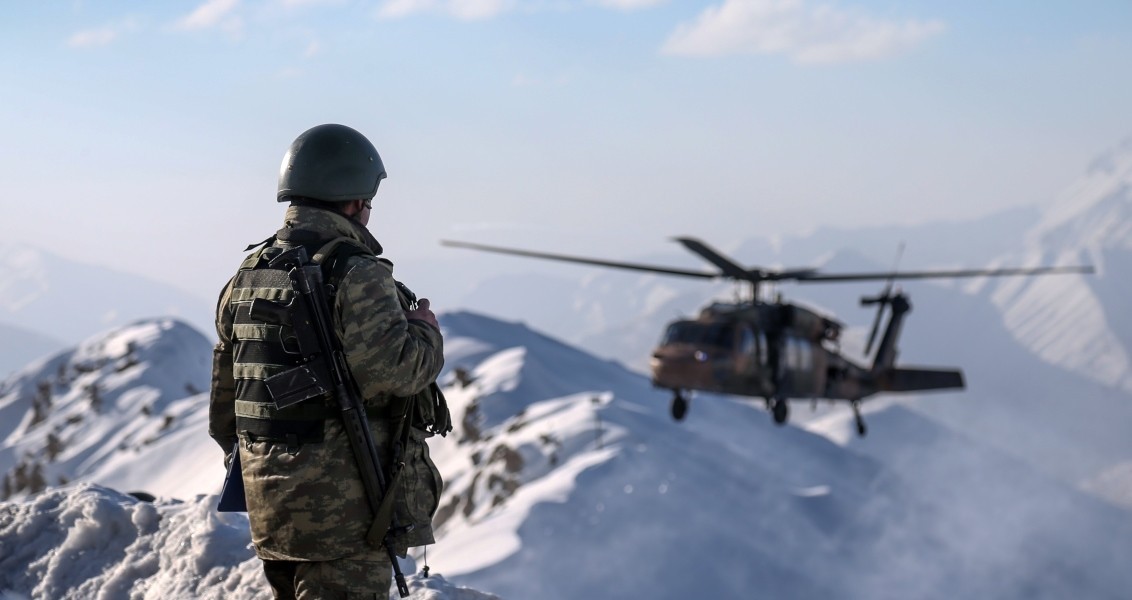 Turkey’s Strikes against the PKK: a New Security Doctrine?

The new security doctrine of Turkey can be commented as a re-constructed and effective fusion of multidimensional diplomacy and defense policy.

Since June 2015, Turkey has been struggling on different fronts against domestic and foreign threats such as the PKK or the FETO coup plotters of July 15, 2016.

The common perception in Turkey and among Turks abroad is that whenever Turkey catches a stage of positive progress and political stability, terror shows its face again. The ever-changing dynamics of the region affects Turkey’s national security in different manners as well.

Turkey faces terrorist organizations in different forms and names, and tries to defend its sovereignty alongside the border with Syria and Iraq. It was expected that 2017 would be a year full of challenges. Yet, almost the first half of this year is reached; Turkey had different decisions to make.

With the failed coup attempt on July 15, 2016, Turkish people again realized and recognized how important it is to stand as a nation against terrorism and any other kind of violence targeting civilians and the stability of a nation.

Nearly 250 civilians were killed on the night of the coup and countless wounded people prompted the Turkish state to fight violent threats with all possible and justified means.

The coup attempt led to the conclusion, that national security and defense policy should not be separated from Turkey’s foreign policy. This was due to several reasons that need to be examined separately, but most prominent of them is monitoring the movement of terrorists targeting Turkey in foreign states.

Only a short while after the coup attempt, Turkey decided then to involve directly into the Syrian crisis and started military operations against ISIS fractions in Syria, called Operation Euphrates Shield.

The nearly 1,000 km-long borders with Syria and Iraq obviously is a challenging issue for Turkey and its national security. Unstable circumstances, terrorism and the fight against ISIS are creating a huge dangerous environment for the region.

This environment is an incubator for violent/armed non-state terror actors such as ISIS, PKK/PYD and others. With Operation Euphrates Shield, Turkey implemented a game-changing act in this spectrum of violence, the fight against ISIS and other terrorist groups in the region.

This operation, which has started only a few weeks after the attempted coup, showed the international community actors concerned with Syria and Iraq, that capacities of the Turkish Armed Forces and the functioning foreign policy apparatuses of Turkey are able to take part in the fight not just as a partner, but an inevitable major actor.

On the other hand, Syria and Iraq witnessed the emergence of ISIS and major struggles for legitimization of the PKK and its off-shoots. Turkey has been conducting for some time tactical and strategic operations against PKK targets in Northern Iraq.

It also mediated clashes between Kurdish groups inside Iraq where it settled military bases to attack the PKK, which had stationed itself in the Qandil Mountains. ISIS’ threat against the Iraqi people, Iraq’s sovereignty and in conclusion the Turkish borders moved Turkey to take important steps.

In these terms, the construction of the military Base, which drew attention during the Iraqi operation for the liberation of Mosul, aims especially to train local forces that should fight ISIS and assist Iraqi forces.

Hence these steps were made, PKK’s Iraqi off-shoot YBŞ (Yekineyen Berxwedana Şengale – Sinjar Resistance Units) made claims in order to taking part in the Mosul operation.

Turkey strongly opposed this and sought strategic and constructive dialogue with Baghdad, which concluded in a partly successful agreement on the future of the Bashiqa Military Base.

But further developments showed that YBŞ elements were included in the structures of the controversial actor of Hashd Shaabi (Popular Mobilization forces).

Turkey’s position on Mosul and the surrounding operations was clear. Firstly, maintaining and securing the region’s demographic structure was the priority. Secondly, avoiding PKK/YBŞ elements to join the operation was also of huge importance, since Turkey’s fight against the PKK was actually in accordance with legitimate actors in the region.

The same also applies for Syria. The reason for this, Turkey argues, is that fighting a terrorist organization by using another could look effective, but would later affect the region’s future in a huge breakdown and may cause several failed quasi-states.

Unfortunately, Turkey’s diplomatic efforts were not successful, giving it no option other than to carry out its own military operations.

Turkey conducted airstrikes on PKK-held positions in Northern Iraq and Syria on the night of 25th April. Press statements of the Turkish Armed Forces claimed that 70 terrorists were neutralized in Qarachok and Sinjar. The statements also pointed out that these airstrikes were carried out in response of attacks against Turkish border units and in order to prevent further aggressions of the PKK.

With this strategic step, Turkey gave two very similar messages in its overall fight against the PKK: The YBŞ should not be taken into considerations as a partner in the fight against ISIS in Iraq; The PKK’s Syrian off-shoot PYD/YPG’s aggressions towards Turkey can no longer be accepted and the US should re-consider its regional partnership.

Immediately after shelling YPG positions in Syria, US military personnel have gone public alongside with PKK/YPG terrorists “inspecting” the damages. That these strikes were carried out prior to a high level meeting of Erdoğan and Trump in the next weeks, should also be understood as a call for a final decision by the US on whether to fight alongside with its NATO-ally Turkey or with the YPG, an off-shoot of a terrorist organization that is also be designated as such by the US.

As President Erdoğan expressed in a conference of the Turkish National Police Academy on “Turkey’s New Security Concept” in November 2016, Turkey is determined “not to wait for threats knocking on its door” and will go in certain terms and issues its own way. Mr Erdoğan also added same claims when he re-joined the AK Party after the referendum on 16th April.

U.S. and Russian troops are now patrolling alongside YPG units on the Syrian-Turkish border. A clash between them and Turkish forces is utopic, but the new security doctrine of Turkey can be described as a re-constructed and effective fusion of multidimensional diplomacy and defense policy.

OSCE's Report on the Constitutional Referendum of April 16, 2017
Previous

What Is the Message from Erdoğan-Putin Meeting?
Next
Loading...
Loading...
We use cookies to ensure that we give you the best experience on our website. If you continue to use this site we will assume that you are happy with it.Ok